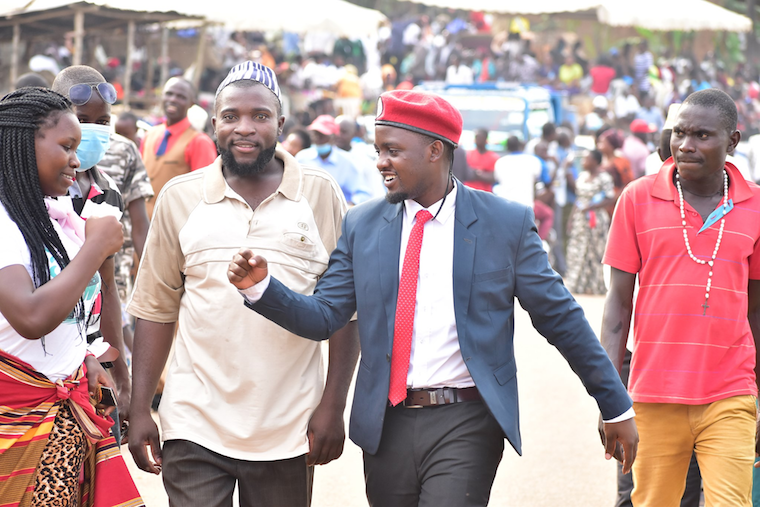 Turning and turning in the widening gyre/ The falcon cannot hear the falconer/ Things fall apart; the centre cannot hold; / Mere anarchy is loosed upon the world,/ The blood-dimmed tide is loosed, and everywhere/ The ceremony of innocence is drowned;/ The best lack all conviction, while the worst/Are full of passionate intensity...”

Beginning the second stanza, W.B. Yeats restores hope, “Surely some revelation is at hand;/ Surely the Second Coming is at hand…” Most African readers got introduced to W.B. Yeats poem, “The Second Coming” from Chinua Achebe’s Things Fall Apart – a novel that ends on a second note.

Yeats’ lines have remained timeless as they paint both calamity and hope. Surely the center in Kampala cannot hold. The worst of Kampala has become more passionate. Mere anarchy is loosed upon the earth. But as ordinary folks look around anticipating a Second Coming, there seems nowhere to turn except Bobi Wine’s home.

The list contained only 177 persons out of hundreds documented by several other sources – with characteristic tales of abductions – numberless drones, plain-clothes men with guns. Relatives were devastated.

Elderly mothers, wives, young men and friends broke down in tears. But they made the journey to Bobi Wine’s home. Why?

Why are these elderly, otherwise apolitical grandmothers, housewives, children and relatives going to Bobi Wine’s home? Why were they forwarding the names of all their missing kindred to Bobi Wine – irrespective of whether they were NUP card-holding members or not?

Bobi Wine is not the “alternative police” to go to once one loses faith in the Uganda Police. I am sure relatives do not think Bobi Wine will launch investigations into the whereabouts of their loved ones. But why are they going to him? Emotional comfort? Maybe.

But there is more. Let’s start from the beginning: Nation Media’s reporter, Solomon Kawesa (his name is important to this story for he has a penchant for sweetening up things) reporting from Magere told me that when NUP elected officials from Busoga visited their party leader before these grand visits, they were hesitant to sing the “party’s anthem,” Tuliyambala Engule.

They sang it but did so out of politeness. Indeed, in the Luganda bulletin that evening, Kawesa reported that they “almost refused” to sing the anthem. But when one of the officials took to the microphone and announced that they preferred to sing another song of Bobi Wine, situka tutambule, the crowd went crazy.

They sang their lungs out. Their faces beamed with joy and blessedness looking to the sky for the Second Coming. The message was that they needed to get onto their feet, and push for the crown. The crown is earned, not given on a silver platter.

Two things have become visible over the last few weeks: (a) the people expect a precise and firm response from the main opposition leadership – specifically Bobi Wine – in whose names all state atrocities are being committed.

(b) Bobi Wine’s lukewarm and terribly timid response to the brutalities of the state or even his incoherent response to the stolen election is starting to divide his fan-base.

On the one hand, you have the grossly misunderstood People Power activist in Dr Stella Nyanzi who, in characteristic Nyanzian fashion, will call out Bobi Wine with unrestricted vitriol. On the other, you have the polite and gentle Basoga who will simply sing Situka Tutambule subtly making their intentions known without hurting the ego of their leader.

Against Museveni intense and passionate worst, ordinary folks, while still having faith in Bobi Wine, are dismayed by his rather tepid approach, and incoherence. In truth, the people going to Bobi Wine to report their abducted loved ones are convinced Museveni is beyond civility.

If regular police is unwilling to record cases of abducted/missing persons, then there is nothing left for them. Ordinary folks see Bobi Wine as their Moses facing off with an all-powerful pharaoh.

He is seen as their voice of power that can politely but sternly issue Museveni with binding ultimatums and warnings of reproach. But the fire-spitting and creative artiste singing at enkuuka festival in Lubiri about how they were going to chase Museveni like a chicken thief has all fizzled out.

Yes, this man, as an artiste, possesses the strongest weapon that sends cold chills down Museveni’s spine. Winston Churchill famously remarked that rhetoricians and orators have a power that kings do not possess.

This is because, as Sheikh Hamza Yusuf rephrased, “kings can only move armies with sovereign force; with military power. But orators can actually move people with speech.”

Indeed, “the English language word, art, comes from the same Latin roots as army,” which should remind us of art’s power.

Karl Marx would tell us that behind every revolution, there was a poet. Indeed, there is a search for this old artistic People Power Bobi Wine in red overalls and berets. But NUP abducted this fellow.

There is a new trend in town, though, and would benefit immensely from Bobi Wine’s mobilizational prowess [and is all constitutionally accommodated]: the activism of Ferdinand Ruta, the man who meticulously assembled an effigy of President Museveni and symbolically caned Museveni for the mess in the country. If we could take any lessons from this man, it is that the people might have to go it alone.

Is Mayiga not aware why M7 is droning, torturing and killing innocent people? Yes Mayiga & Kabaka have come out on occassions to use your words, "candidly called govt out."

However of what good is it while not calling out the root cause of it? Life presidency and/or overstay in power of M7 is the root cause of the destruction of Uganda! It's like washing a white cloth clean and dry it in mud.
Report to administrator
-2 #52 Remase 2021-03-15 22:35
Mayiga clearly knows that M7 rigs elections and the reason why.

To be a life of president, which breeds patronage, nepotism, tribalism and corruption. That's exactly what is happening!

Why would Mayiga passionately congratulate M7 for rigging elections and further urge the nation to accept them? Then thereafter, affectionately tell us that M7 is the best president Uganda has ever had! Is that so?
Report to administrator
-2 #53 Remase 2021-03-15 23:20
Talking about Fanning Mengo into openly talking about politics! Who asked Mayiga to openly show his affection with M7?

Who asked Nabagereka to openly show her affection for Janet M7? Who asked Kabaka Mutebi to accept the army (SFC) to protect him? No Buganda Katikiro has ever been protected by the army but Mayiga!

Who doesn't know that Uganda is under a military rule? Mengo/Mutebi are Fanning themselves directly and openly into politics my dear, not me.

That's why they can't call a spade a spade, that M7 must go. They can't call out that enough is enough because they have a conflict of interest. They can't bite a hand that feeds them! That's where the problem lies.

Guess what, I am not going to stop until Mengo pulls the rug on M7 and further pulls it's nose out of politics. As you rightly stated, politics is what got Mengo into trouble but they don't learn.
Report to administrator
-2 #54 Remase 2021-03-15 23:40
Mengo is in bed with M7 and they have sunk our nation into deep shit. Uganda is now considered a shithole country.

A status we have never achieved before. Not during Amin or Obote regimes. However, Mayiga has the audacity to say that those who are droning, torturing and killing innocent people are intending to make M7 look bad! As if M7 is good.

M7 is the worst and has divided our country along tribal lines. Now Abanyalwanda are looking to be identified as Ugandans with a different name!
Report to administrator
0 #55 Ferdinand 2021-03-16 13:13
Remase, you actually shouldn't blame Museveni. Others may, not you.

With that sick tribal mindset you have, you would be worse than him if you had power. You would massacre Buganda out of envy and hatred. You can't hide it because it is a sickness. You need counselling
Report to administrator
0 #56 Remase 2021-03-16 21:07
You and M7 share a lot In common, one of which is, M7 is tribalistic.

However, he turns around and say that Baganda are sectarian! I have presented irrefutable evidence of Mengo's affection for M7 and you haven't denied any.

However to your understanding, the truth is what you call hatred of Buganda. In truth, it Mayiga/Mengo who hate Buganda because M7 is indomitable to destroy Uganda.

M7 clearly knows Buganda's significance. That's why he compromised Mayiga, Mayiga was once abducted and tortured because of criticising M7.

Has M7 got better or worsened since then? Far much worse because droning, torturing and killing innocent people is now the norm. However, Mayiga says that M7 is the best president Uganda has ever had! Is that what you call hatred of Buganda?
Report to administrator
123456