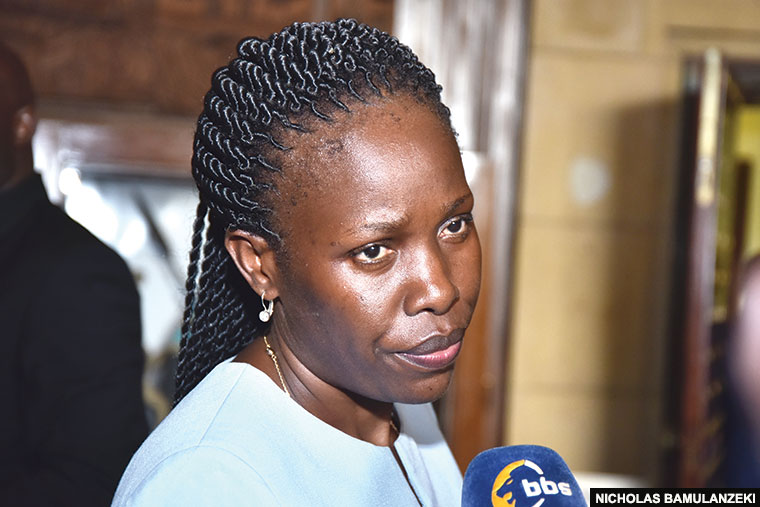 The minister for information Communication Technology (ICT) who is also the government official spokesperson, is angry at the opposition National Unity Platform (NUP) for launching a campaign that lifts the veil on the security forces’ diabolic actions that ultimately taint the country’s image abroad.

The minister Judith Nabakooba claims that through the use of social media, NUP has manufactured fake images of their supporters being beaten and, tortured by security operatives. One of the tenets of a good spokesperson and spinmaster is honesty.

It’s disastrous to be caught telling lies because that erodes public trust in you. Further, a spokesperson must be equipped with the relevant facts and desist from denying the obvious for the sake of it.

And it is because of this apparent dishonesty or being very economical with facts that has eroded the public trust in police spokesman, Fred Enanga. The public including the media have come to disregard whatever information Enanga communicates to Ugandans.

In fact, he has become a butt of jokes on social media and he has been drawn variously in different caricatures that grace the newspaper cartoon pages.

The Army spokesperson, Brig Flavia Byekwaso either has no clue about what entails her job or she just prides in lying and denying for the sake of it.

For instance, last month after military police officers battered journalists who had gone to cover NUP president Robert Kyagulanyi Ssentamu as he delivered his petition to the United Nations Commission for Human Rights, Byekwaso alleged that the journalists assaulted some officers and therefore the army had responded to provocation.

Later she said journalists should properly wear their media tags to avoid being confused with NUP goons!

She did not find it important to put the matter in proper context. But a day after, her boss, the chief of defence forces (CDF) General David Muhoozi , embarrassed her when he called a press conference and apologized for the unethical conduct of the soldiers.

They even purportedly tried and sentenced the officers who had beaten the journalists. So why did Byekwaso find it useful to defend the indefensible and lie about the obvious! Nabakooba’s complaint is misguided. It is not NUP that deploys gun-toting men to abduct people in broad daylight. It is not NUP that maims young men who are associated with the opposition.

It is not NUP that manufactures images of boys whose arms have been broken. In fact, the government propaganda machinery is very uncoordinated. At the height of kidnaps and disappearances of people, all security forces, including police denied knowledge of such macabre events.

Even the minister of Internal Affairs could not authoritative tell parliament where the kidnapped people were kept. It was much later that the presidential advisor, Gen Proscovia Nalweyiso admitted that security forces had some of the missing persons. The minister seems to like to cling on excuses instead of acknowledging government’s wrongs.

Further, in the past when she was a police spokesperson, she could afford to lie because social media and other forms of communication were not as robust as they are today. The government image polishers attempt to hide an elephant under the bed.

It is too big to fit. What they need to do is to advise their government to do the right thing and then the alleged lies by NUP will fall on their faces. And the solution also does not lie in suppressing the press, switching off the internet and hacking certain unfriendly online accounts.

A leopard cannot be mistaken for a goat even if it hides its skin spots. The government spokesmen need to honour and respect the intelligence of Ugandans.

Otherwise, why is her Boss, "Our Problem of Africa, Author and Master of Violence and Abduction" Gen Tibuhaburwa quiet like proverbial mouse?

Yesterday on NBS Live at Nine, I watched a retired General, J J Odong speak in tongues because, he could not face the Camera to tell the views; especially the relatives of the whereabout is the full list of Missing innocent Ugandans.
Report to administrator
+1 #2 kabayekka 2021-03-03 15:11
Sooner than later, NRM is going to deny it all that crap, that as its leadership was about to resign because of term limits and age limits, its supporters refused to accept the inevitable.

In all press and media, NRM was overjoyed and promised to continue with its old age leadership paka last as tear gas and bullets were opened up from their import boxes.

As all this mess was happening under COVID19 one cannot believe that the government opposition was going to have a comfortable bed of roses!
Report to administrator
+2 #3 Ankunda Jalia 2021-03-04 12:23
Simeo Nsubuga, Nabakooba, Enanga, Flavia Byekwaso's shapeless lips all look alike, adapted by daily comedy of lies and foolery.

I really pity these spin doctors trying to deodorize the foul of NRM human rights abuse..
Report to administrator
+2 #4 Mulongo Gasto 2021-03-04 12:31
I had a crush on Nabakooba when she had just been appointed police spokesperson.

She was then young, innocent and refined like the original properly groomed Muganda lass. But today, what comes out of her mouth makes me want to puke.

She has become a shameless liar with eyes wide open like a witch and she has aged greatly.In other words she is a true image of the decadent nrm with no conscience.
Report to administrator
+1 #5 Mubiru 2021-03-04 20:32
At times i am forced to break my vow of never wasting my time to write in this space again for all sorts of reasons.

However I have temporarily vacated my hibernation to correct the editor and all the commentators.

Much as I appreciate the editor's candid and well presented views I must point out that the photograph of whoever calls herself Nabakooba is "faked" like the images of those severely beaten and shot even killed by the security are "faked" according to one Nabakooba.

Please stop showing us faked snaps of Nabakooba . There must be another "real" Nabakooba who might not even be a Muganda as some one assumes.
Report to administrator