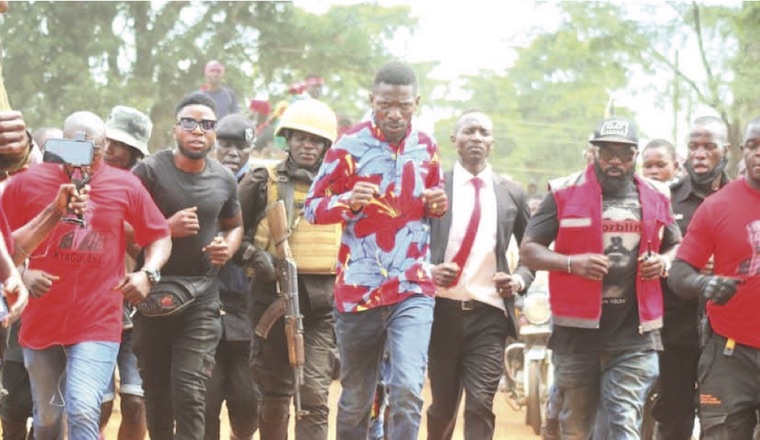 Bobi Wine leading his supporters in a run

Bobi Wine and team should beware – or at least, have it at the back of their mind – that they are actually seated in Paul Kawanga Ssemogerere’s 1980 spot right now.

While the country was ready for a full-blown military struggle, Ssemogerere sat back, offering rather hazy alternatives to his voters. Whatever his justification, the events that followed gave us the most rejected candidate of the 1980 election. The fellow who came last, read the moment well, didn’t go too far from the capital nor outside of Buganda – because political activity happens here – and has been with us for the last 35 years.

All he had in his arsenal, as Joseph Kabuleta would put it, were guts. I am sure comrade PKS has never stopped regretting his lack of courage. As my father told me one time, if the farthest Museveni could go was Luweero, then Ssemogerere didn’t have to leave Kampala.

Presently, if any of the losing candidates summoned Museveni or Andrew Kayiira type of courage, not to the bush this time – bushes are extremely cumbersome nowadays – but to simply invoke Article 29 (1) (d) of the constitution and shout it on top of a mountain: “freedom to assemble and to demonstrate together with others peacefully and unarmed and to petition,”
this country would not be the same.

I know Museveni would make it extremely difficult and life-threatening to assemble and demonstrate. But before NUP cultist-opportunists dismiss my plea, I want to remind Bobi Wine of the pain that comrade brother PKS has had to live with for this entire time.

But at the same time, there are moments that do not come often in our lives, to be kingmakers. They do not last forever, and we ought to harness them at their appearance. Bobi Wine has the best cultist following in our time – a major ingredient in the agenda I am about to spell out that could change the fortunes of Uganda.

[Hajji Nasser Sebaggala had it in 2001 and we chanted his name; Col. Kizza Besigye in 2006 and 2011 and voters simply lined the key]. Let’s start with the petition: whatever the outcome, Bobi Wine and team will soon realize the need to call on their disbanded civilian soldiers onto the frontline of this struggle.

There are two possible outcomes, nullification or upholding the election. But let’s focus on the most favorable: if the Supreme court summoned the courage to nullify the election, they would not assent to barring Museveni from standing again. Neither would they dismantle the Byabakama Electoral Commission, which would immediately have to organise a re-run.

As is expected, Byabakama would declare Museveni victorious, again. Would Bobi Wine return to court expecting another nullification? Unlikely. But the damage is that this second Museveni “victory” would be more legitimized than the first.

There is a silver-lining, though: this court process and re-run will come along with more than one sumptuous opportunity for steady activism [and political action], which is calling on people to “assemble to demonstrate together with others peacefully, unarmed and to petition.”

This is the only way Museveni and his security forces could be brought to their knees, and have the international community intensify pressure on the aging autocracy.

There are three points to take from this: (a) I hope embarrassing Mr Museveni as an election thief is not the ambition of Bobi Wine and his attorneys. To use one of Slavoj Žižek’s favorite jokes, embarrassing a rapist who molests your wife in front of you, by throwing a little dust on his testicles, cannot be celebrated.

You cannot start jumping, “at least, his balls are dirty!” Museveni is beyond embarrassment. (b) I also hope Bobi Wine appreciates that the aspirations of his voters were never for him to replace Col Besigye/FDC as the main opposition force. But, rather to upstage Museveni completely.

This is why voters voted for people with no names, faces, or public profiles. They handed him soldiers, not leaders or policy analysts. NUP elected officials, with their newly found public identities, should be mobilizing assemblies for protests, and not buying new suits. (c) At the end of the day, Bobi Wine will have to invoke Article 29 for a genuine and timely challenge.

There is no point running away from it in the name of peace. It is an authentic constitutional provision. In real terms, this also means remobilizing People Power – the movement.

Yes, Museveni will make it difficult and dangerous. But look, his men are already kidnapping, torturing and killing even when Bobi Wine continues to chant slogans of peace. People Power is Bobi Wine’s only joker card. He has to proudly own it and dangle it around.

As I argued in the past, before the state appreciates that the governed are capable of even more violence, the state cannot act responsibly. Interestingly, peaceful demonstrations actually remind states of the people’s potential for even more apocalyptic violence.

The simple artistic forms that made and defined People Power have to be given more prominence: red overalls, and berets; songs of the struggle and freedom, memorable slogans such as #Mwebereremu, #TeriKuzikiza and asking everyone to do what they could – in the spirit of Article 29.

Energize Col Besigye’s frail but strategic initiatives such as the Noise campaigns, boycotts, his checkered shirt, etcetera. All this is enshrined in Article 29.

The problem with Africans and black people is power. Look at Mao, the DP president. He said that if he fails to get 15 MPs elect, he will resign. Did he? No.

He said that, "Olwokusa kwabangi, he is not going anywhere! M7 said almost the same thing but used different words, that after 4 years, Ugandans would hold elections to chose a leader of their choice.

That never happened. So, there's no difference between Mao and M7 when it comes to power.
Report to administrator
+1 #42 Remase 2021-02-21 22:52
Let me give you another example. UPC has come out and say thay will not be part of the opposition trying to kidnap Mr. Tibuhaburwa's victory!

Bishop Lwanga used to be one of the critics of M7's govt. In fact he even received a call from a person who spoke in an accent of like M7's, who threatened him that he would be killed like Bishop Luwum.

M7 called Bishop Lwanga and gave him a hand shake of sh. 500m! Now Lwanga says, awangale ai Sabalwanyi M7. Katikiro Mayiga was once kidnapped and tortured, just like what is going on now.

Why? Because of criticising M7. After becoming Katikiro, M7 gave him the SFC protection.
Report to administrator
+2 #43 Remase 2021-02-21 23:08
I don't know what else M7 gave Mayiga, however, Mayiga is one of those who whole heartedly believes that M7 the best president Uganda has ever had and does not rig elections.

I could go on and on. Batty Kamya, Mama Mabira, you name it. The point is, buli omu anonyeza lubuto Lee. Power and greed is what motivates Africans.

You must sit down with those who are genuinely looking for change and find a common objective. Then work together to achieve it. Certainly it won't happen overnight. It requires a lot of work.

However, it's possible and/or achievable. Let's put our differences aside and join together to achieve a genuine fundamental change. Unity is the only solution. NUP is a Fugazi unity. It won't achieve anything whatsoever! Nada. zero.
Report to administrator
0 #44 Akot 2021-02-22 14:22
Quoting Remase:

Uganda is on fire and natives/citizens and fleeing it to go overseas.

M7 came to power on the premise of fire/violence! We don't need to use violence and no one is advocating for violence.

M7 is a self proclaimed most violent individual. He is determined to put the country on fire, just like he did before. Is that what you call, this country can not go on fire?

And the reason the outside world is "quiet" is because it's ugandans to whom tribal lands belong keeping the migrant they gave shelter to in post!

Worse, Ugandans are alright with the divisive tribalistic system the migrant put in place to ensure they are POWERLESS & it's Ugandans fighting one another to ensure not 1 of their own from a tribal land save them!...
Report to administrator
0 #45 Akot 2021-02-22 14:37
...Remase,

All that's needed is Bobi Wine calling tribal leaders to stand down & to UNITY! But B. Wine is going to M7's court in the Uganda that belongs to the migrant, for justice!

Bobi is telling the world that the shithole ruled by M7 for 35 years is a democracy in which he will get justice!

Ah! B. Wine is from a tribal land, but not even his own tribal leader is defending him!

Ugandans have surrendered the country formed by their tribal lands to migrant Museveni, thus made themselves the migrants!

So, migrant Ugandans are leaving M7's Uganda for better life in exile!

Pathetic Acholi worship Museveni who killed, destroyed & made them nothing while UNHCR confined them in refugee camps!
Report to administrator
0 #46 Akot 2021-02-22 14:45
Quoting Remase:

M7 owns Uganda and holds the power to do whatever he wants.

For 35 years, M7 has done nothing but to build a nation that revolves only around M7, and everybody and everything is answerable to and payable by M7.

The entire govt, parliament and judiciary only answers and invests their trust in only M7.

So, when Kyagulanyi stepped on the political scene with, "people power-our power, he gave a false hope...

we are worse of than Amin or Obote's days. Back then, we were all united and determined to bring change to Uganda.

Right now, Kyagulanyi is simply doing the same thing over and over but expect different results!

Time the youths looking up to Kyagulany force him to call tribal leaders to stand down & to UNITY to block M7!

The problem with Africans and black people is power. Look at Mao, the DP president. He said that if he fails to get 15 MPs elect, he will resign. Did he? No.

M7 said almost the same thing but used different words, that after 4 years, Ugandans would hold elections to chose a leader of their choice.

Kyagulany's supporters MUST force him to be a National Leader - he cannot fight M7 through court in the Uganda that belongs to the demon & expect to get justice!

Kyagulanyi is denaying his own belonging to Uganda & is begging Museveni for mercy, just like Acholi do!
Report to administrator
+1 #48 Remase 2021-02-22 21:03
Akot my love, we, Ugandans, don't learn anything! Could you imagine that M7 has everything and he is determined to anything to cling on power.

However we aid and abate all his efforts by going to his organised elections and after losing, petition his court! We have organised criminals running our country, but act we are acting as we have democracy and the rule of law! Akot, when you talk about the tribal leaders, who are part of the problem, you make a lot of sense.

Katikiro Mayiga is protected by The SFC. When you get to his home on Entebbe road, you would think that it's an army barracks! It's M7 who gives Mayiga that protection, including those who hold the umbrella for Mayiga at all times.

As it is, Ugandans should begin to think of what the situation will be when M7 dies & his military son takes over the family business;

- Will M7's son maintain the tribalistic system his father
put in place?

Look at how pathetic Acholi tribal leader & elties are; pretending M7 is their saviour & forgotten the demon killed them, made UN confine them in refjugee camps, sent them in exile!