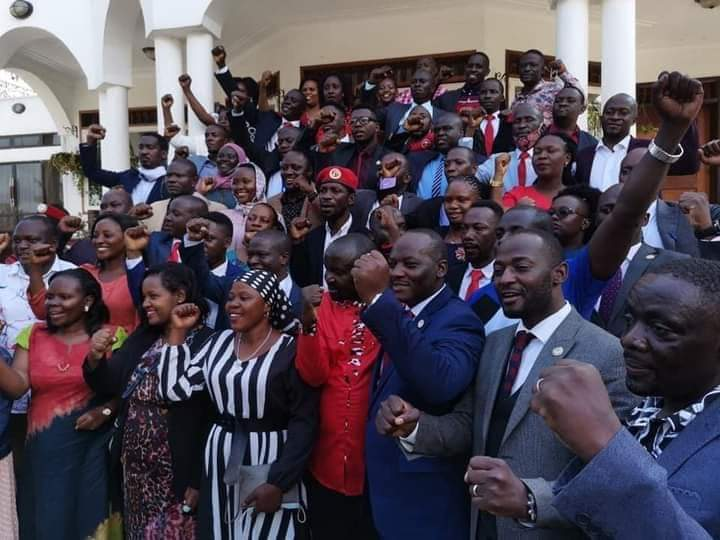 Some of the elected NUP MPs

Ahead of the Kyadondo East by-election in 2017, I caught up with aspiring candidate, Counsel Nkunyingi Muwada at Tipsy in Wandegeya.

Nkunyingi and I come a long way. I was his campaign agent in Northcote State (young fellows know it as Nsibirwa Hall) when he stood for Makerere University guild presidency in 2005. We lost. As active members of the Makerere Muslim Students Association (MUMSA), Nkunyingi and I sustained the debating forum that happened every Saturday at the university mosque. Nkunyingi is such a loquacious and ceaseless conversationalist.

I recall a time when only two of us showed up for the weekend’s debate. It had rained and students had stayed in their hostels. Instead of walking away after 20 minutes into it and no other person turning up, we decided to take turn and debate the topic – just the two of us.

If Nkunyingi was speaking, I moderated him, and if I were speaking, he moderated me, raising objections and points of information. There was no audience, just us, but the set was complete.

We went on for over 30 minutes before two more people joined us. The debate rolled on for a full two hours! That day wasn’t lost in the history of the Open Forum. Nkunyingi is a smart debater. Brilliant, fearless, eloquent.

But when he announced to me that he was running in the by-election in 2017, after rumour had come through that Bobi Wine was also standing, I told him not to waste his time. I told him as a scholar of popular culture, I had studied Bobi Wine – his art and politics – all through 2014 to 2016, and he stood no chance against the rebel artiste. But, in his characteristic rebellious fashion, Nkunyingi didn’t listen.

He stood. Bobi Wine beat all of them hands down. I am telling this story to establish a moral high-ground to speak to all you NUP-elected officials.

I know, for being elected, some have started acting all sanctimonious and arrogant believing in the genius of your personal accomplishments. [Yeah, true to a degree, but not in the explicit of being the Messi of the team].

If there are any lessons we could take from the victory of Jane Namale, the Woman Councilor for Bubeke-Kyamuswa sub-county in Kalangala district, who never campaigned, and allegedly had been “bought out” of the election by the NRM-buying machinery, but ended up winning by a landslide, because her name remained on the ballot, it is that people voted the umbrella, and not anyone’s personal accomplishments.

When people speak about ‘the wave,’ they actually mean that whoever stood on the NUP-umbrella ticket, their CVs, eloquence, smartness, manifestos or whatever claims they had, did not matter.

Not even their beautiful faces counted. The innumerable stories of young NUP elected officials stopping by market-squares to thank their voters for putting them in office, only to be asked by the same voters who they actually are, should be instructive enough.

The voters do not know them at a personal level. That means, it could have been anyone. Look, if my friend, Dr Stella Nyanzi lost, perhaps the most accomplished candidate in the Kampala Woman MP race (a renowned women, girls, vendors’ activist, political prisoner, eloquent speaker,
and close friends of Bobi Wine; the first person to fearlessly and spectacularly call out Janet Kataaha Museveni, a thing that excited many Kampalans), it is that voters never scrutinized anyone’s CVs.

There was blind voting for the umbrella. Nyanzi’s neighbours, at the same polling stations where she had voted, called her ahead of the counting, to reassure her of the vote, as they had voted for her umbrella. They only broke her heart. Please do not be fooled by the victories of Hons. Ssemujju Ibrahim Nganda or Muhammad Nsereko.

Or the loss of Nabilah Nagayi-Ssempala. These are exceptions that happened under special circumstances, and need a different set of tools to appreciate them. I know many of you are looking forward to May to be sworn in. You are excited about your performances on the floor – and are looking forward to bamboozle your listeners. But please beware that whichever house you stand in, your eloquence is useless – as long as Museveni is still president.

Debate, collaboration, or reaching out, does not move the day, power does. Be it at City Hall or Parliament Avenue, Museveni’s vulgar agendas are everywhere and will be pushed through by all means necessary. If it means locking Erias Lukwago out of office for an entire term, or sending SFC to parliament, Museveni will do it. Beware also that before he does any
of this openly violent stuff, he will seek to violate your integrity with money.

He will throw it at you – and a lot of it. And since most of you newbies are still living in rented domiciles, and in dingy neighbourhoods, money will be irresistible. But see it as a form of violence, a form of abuse.

Your voters are watching and five years is such a long time for a new wave to emerge. The umbrella is not even a year old. Again, I know some of you will be happy to have a Kato Lubwama moment in the house – eat-and-leave.

Perhaps you should never have read this. For those genuinely interested in changing the fortunes of Uganda, your election was solely in the interest of the resistance. Not your speech, not your ideas. There have been eloquent speakers before. But as long as Museveni is still president, no one listens.

And as President Museveni has endlessly demonstrated, City Hall, Parliament, and Kampala’s streets are places of war. So, get ready for war: wear your red fatigues, sing songs of resistance, shout the resistance, disrupt, and move parliament to the streets. If you could take any lessons from your head, Bobi Wine spent more time on the streets than on the floor of parliament.

That is clearly an invitation for unity. However, Kyagulanyi/NUP, Besigye/FDC, Mao/DP think and believe that each individual party and/or its leader can take on M7 and uproot what he has built for 35 years!

That's why Kyagulanyi has already come out and denounced plan B. We only have M7 who has a united front which is indomitable to completely loot our country for life.

The opposition which desperately need a fundamental change, is completely divided! I thought that when Kyagulanyi sang that, "Buli omu asiba kiwanyi," he was kidding! Kumbe he is also good at it! Mbu "people power-our power!" Oh really!
Quote | Report to administrator
-1 #32 Wooden K. 2021-02-12 17:34
Hmmm , like a serpent;always trying to shade its skin.

Can`t hide away like the guilt secrets one tries to keep in one`s subconscious.

When a nation forgets its source of success , military or material possession eventualy become insufficient.

M7 owns Uganda and has just admitted that those who kidnapped by the drones and tortured, and others killed, are held by the govt!

Now, you could have your cabinet as balanced as your buttocks, how do they fit in here or help the current and future situation?
Quote | Report to administrator
+1 #35 Remase 2021-02-15 08:42
Akot, I will always love you. You know we think alike, which is the envy of others! Trump tested what real democracy is.

Could M7's minister or NRM member come out and say enough is enough, M7 go? Kyambade is the only one who came close, she said that, it looks like people are tired of them because they are in power for a long time.

Katikiro Mayiga or Bishop Lwanga can't say that. However, Kyagulanyi is running to M7's court after losing the bogus elections. That's what Kyagulanyi calls democracy at work! Buli omu asiba kiwanyi, right?
Quote | Report to administrator
0 #36 Wooden K. 2021-02-16 14:47
The LIE:
" Trump tested what democracy is ----even his ownrepulican party come out AGAINST him"

THE FACT:
Trump was acguited because his own republican party VOTED AGAINST his conviction.

THE LIE:
" Thats what Kyagulanyi calls democracy at work"

Kyagulanyi says . because there is NO DEMOCRACY , we are in a STRUGGLE for existence.
PORKY:
"Kyagulanyi is running to court AFTER LOSING the bogus elections"

VERACITY:
Kyagulanyi went to court BECAUSE he WON the election