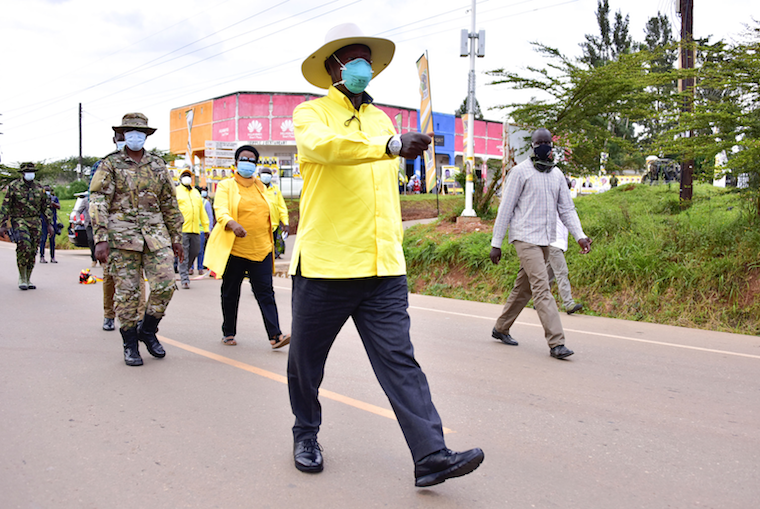 My candidate, President Yoweri Kaguta Museveni, is still the most popular even when we do not have public rallies.

First and foremost, NRM has had a track record of successes since assuming leadership of the country 35 years ago. The foundation of this success is based on NRM’s capacity of ensuring peace, security and stability to all parts of the country. This has been achieved by NRM because it has fought and won wars against many rebel outfits.

Another success story is to do with economic growth. Uganda for the last 25 years has had the 11th fastest-growing economy in the whole world and fourth in Africa, according to economic growth data from the IMF for 189 countries. Through a liberalized economic policy, Uganda has been able to nurture a vibrant private sector that has largely contributed to an increase in the tax base.

The same liberalized policy has made it possible for foreign direct investment to be attracted to the Ugandan economy. The NRM government has enhanced democracy, which was enshrined in the Constitution through provisions that make it possible for free and fair regular elections.

In infrastructure development, from 2016 to 2020, 1,162km of new roads have been tarmacked, 449.2km of old tarmac roads have been repaired and the ongoing construction is at 1,375km. Service delivery is also a strong success story due to the introduction of UPE and USE, which have revolutionized the education sector.

Because of UPE and USE, the literacy rates have improved. Also, the welfare of the teachers is being addressed through the salary increment and sending money in the teachers’ Saccos. The expansion of university education from one university in 1986 to 39 universities has increased the enrollment of students.

NRM is the only party that has managed to field candidates in all elective offices. This goodwill has not only been extended to the president, as the party chairman, but also to the NRM party as evidenced by our internal survey, which indicates that NRM will win this election by 75 per cent.

Ugandans at home and abroad are waiting for the presidential and parliamentary elections that are slated for January 14. For obvious reasons, all the attention has been on the presidential election, which has been described as the most keenly contested since Uganda’s return to democratic rule decades ago.

Undoubtedly, whoever will eventually emerge as the winner of this election will determine the direction of the country in the next five years. My appeal to all concerned parties is to bear one thing in mind: in every contest, there must be a winner and a loser. And an election is a contest, not warfare.

There are many predictions that this election will largely be marred by violence and intimidations as results will be announced by the Electoral Commission days after. And there could be a palpable apprehension among Ugandans, which may lead many to make huge cash withdrawals and stoking food items and other basic items in anticipation of the worst.

And now that we are left with only a few days to the voting day, the onus is on all Ugandans to ensure that the self-fulfilling prophecy does not come true. It is for the peace and overall wellbeing of everyone that peace must prevail in the post-election period.

The youth of this country must, therefore, not allow themselves to be used by anyone as agents of destruction. I also continue to urge all candidates of the different political parties to guard their utterances and avoid inciting comments that might lead to violence.

Are journalists doing their jobs well?

Recently, some media practitioners from several media houses fell in the harm’s way of the police force. This was very unfortunate and regrettable.

Professionally, a reporter must be balanced and accurate in her or his reporting. However, most of these assigned reporters have been seen on many occasions reporting what these candidates want them to, not what the public wants to know (Public Interest).

Sometimes we think that you know too much, which is true but the latest developments in the industry (New Media) have indicated that you are also hiding so much from us, and this too, is not in public interest. No one in her or his right sense of mind supports violence.

However, there should be equal coverage for all victims. Journalists should not be seen as asking for too much or special treatment. No one deserves any form of injustice regardless of their profession.

And for the industry’s sake, if any journalist wants to be seen and heard as politically active, which, by the way, is not criminal, my advice is clear: take back the equipment to the newsroom and show up at the headquarters of a certain political party of your choosing.

Uganda is on the brink of the 2021 elections. However, there are many parallel institutions that have been established to spy on each other.

Duplication of services leads to wastage of resources.   But President Museveni, through the police, is unleashing terror on the people and lately Zebra Ssenyange, an innocent boxer, was shot dead by security forces.

This was after the November 18 shooting in Kampala and other parts of the country when presidential candidate Robert Kyagulanyi was arrested in Luuka district and incarcerated at Nalufenya, a detention centre in Jinja town.

Even in recent times, automatic weapons are not meant for police but the army to intervene with immediate effect in case a criminal situation worsens. The police deployed to quell protests are equipped with riot gear, canons and at the worst use rubber bullets to tame and disperse crowds.

Presidents and other high-ranking government officials are guarded by police and secret service agents. Make no mistake, the Police doesn’t shoot to disable, disarm or arrest but shoot the unarmed to kill. Why is the international community silent over these atrocities?

A nation is built out of the human intellect. This means that a nation cannot be built without the recognition and the collective efforts of all citizens.

Young people are a crucial segment of a nation’s development, and Uganda is not an exception. Their contributions, therefore, are highly needed. It should be common knowledge that the most vibrant section of every society is the youth.

Therefore, the youth have the responsibility of being at the fore-front of any national exercise. Whenever there is unrest in a country, political forces use youth for their selfish interests.

For example, the youth in Uganda have practically been involved in chaos in the form of protests and boycotts, which no doubt have been planned by our leaders. This is not helping Uganda to grow. We should appreciate that youth leadership skills are relevant to young people’s personal development.

This helps them analyze their strengths and weaknesses and set personal and vocational goals. One of the problems we have in Uganda is that the youth have been lost in the world of fantasy and gambling.

We should engage the youth of Uganda to play a significant role to demonstrate strong leadership skills, have personal drive and a passion and energy for making a difference in communities. Don’t monetize politics to deter the young people; rather, create an environment for fair competition.

As we come close to the election days, I urge the government to support youth in taking the initiative to engage in civic and community activities in order to build on their strengths and self-esteem, and to work together as a team in building leadership skills.