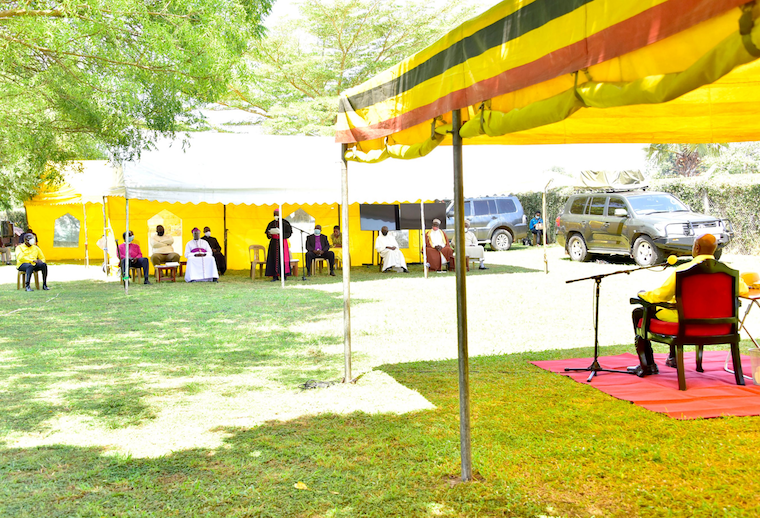 When so much real evil is dressed up with phrases like 'securing your future' 'law and order' ' COVID rules', then prayer is not enough, we must act.

No person, with even with half a brain cell, should tag themselves to a thirty-four-year-old still-born regime, which wants to continue to misrule our country, but which is worse than our worst nightmare. No catholic, or indeed any spiritual person, should attach themselves to this power-mad, murderous clique, which shamelessly calls itself 'our government'.

Now there is going to be an earthquake of an election, possibly with some violent after-shocks, prophesied by among others, our dear religious leaders of the Uganda Joint Christian Council (UJCC).

The reality is that it can't be stopped! It's like a big lorry hurtling downhill with no brakes!

The best we can do now as opinion leaders, is a kind of self styled emergency civic education, based on why and how we choose leaders. We must urgently explain to our people in these few days left, why it is totally wrong to elect an immoral regime; that is one which has opted for murder, brutality, corruption, theft, nepotism, impunity, lies and demagoguery, as its modus operandus.

We must explain that it would not just be a political mistake to vote for such, it would be SINFUL, in the proper sense of that word. It would be a grave offence against God and man, for which terrible consequences await us, in this life and the next.

So no more sitting on the fence, dear religious leaders. No more appearing to be 'impartial'. No more evading an important moral option by averring that "God will save us if we pray".

The people have already judged us, rightly or wrongly, as having let them down, or as having been compromised. How will live with that negative profile in the new Uganda?

Actions speak louder than words. We must now clearly show by word and deed, which political organization is NEVER to be voted for, under any circumstances, and why.

That is when praying will become meaningful. In the bible, God commands various people to do certain things. Moses was asked, to strike the waters of the Red sea, the lepers to show themselves to the priests, the leprous Naaman to wash himself in the Jordan, Zaccheus to come down from the tree.

Apart from praying what is God asking of you now?

The author is a Catholic priest. Article first published on Facebook on December 28, 2020.

Matters of murder, brutality, corruption, theft, nepotism, impunity, lies and demagoguery are not discriminatory along lines of chosen lifestyle.
Report to administrator
0 #3 kalani Jonathan 2020-12-29 23:10
Do we have any politician fronting the homosexual agenda?

Musala is supposed to be a priest who has nothing to do with sex. Are priests supposed to be homosexuals?
Report to administrator
+4 #4 Akao 2020-12-30 03:09
At least few people in Uganda still have brains. If we have more who can reason like this father, we would send the muderous dictator back home. Prayers have never solved any problem.

Unless a person does something, they can pray until the end of their lifeet and get nothing in return. Let's get the mudorous out of Uganda!
Report to administrator
0 #5 Kasede 2020-12-31 12:07
Quoting Straight Ugandan:

I wonder, did you celebrate Xmas? If so, please be informed correctly that most Äbrahamic" religions are about sex and homo is sex too.

We have just celebrated Xmas - the result of pedophilia and rape (both ILLEGAL but not necessarily SINS). I WISH YOU ALL A HAPPY NEW YEAR [regardless of sexual methods you practice].
Report to administrator
+2 #6 Lakwena 2021-01-04 14:55
Quoting Straight Ugandan:

in other words, like Satan is always hooded under the false identity of "Holy" Straight Ugandan must be the most crooked at heart.

What the Devil does, like "Straight Ugandan" has done herein, is to demonize his critics. E.g, Jesus was accused by his persecutors and prosecutors; the Pharisees, for being a glutton, drunkard and Prince of Beelzebub.

Characteristics of the Devil/evil when exposed; it/he accuses his victims/critics for being emotional, anger, hatred and/or nuggu (jealousy).
Report to administrator
+1 #7 Lakwena 2021-01-04 15:12
Otherwise, thanks Father Musaala for fulfilling your priestly/prophetic duty, by coming out clean to publicly speak for the voiceless and condemn the current evil politics in Uganda as it is; instead of whispering it under your armpit.

Instead of hobnobbing and frequently fraternizing with him in false National Thanksgiving Prayers in our State House, I wish many more clergy (the religious clerics) especially the Bishops, Sheiks and Imams came out and condemned the leadership of our "Problem of Africa" Gen Tibuhaburwa Kaguta M7 aka Juma Lenin.
Report to administrator