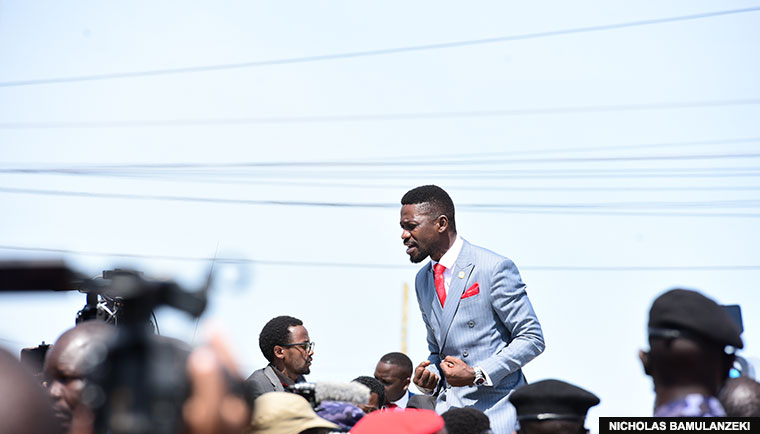 Bobi Wine after his nomination as a presidential candidate

I needed to write this article: I have been talking a lot about Mr Wine for the last six years – as my research subject, activist, and later as politician.

I must confess that my political subjectivity has denied me chance to appreciate Bobi Wine’s political feats – which recently culminated in nomination as presidential candidate for the 2021 election. I needed to step back. As a reader in politics, I remain conflicted about Bobi Wine’s decision to aspire for the presidency – via an electoral process.

It appears naïve to believe one can defeat Museveni in an election he himself organises and supervises. But for a serious activist who wants to stay alive and keep out of jail, it is a smart move to participate in a Museveni-election. There is little security in there.

As a reader in popular culture, on the other hand, I need to celebrate Bobi Wine’s cultural revolution, symbolised by his candidature both as a landmark step in his activism, as an organic peasant intellectual [The type that Okot p’ Bitek wrote about in Artiste the Ruler] but also as a personal achievement.

Most of Africa’s liberation icons have had humble backgrounds, but there is something peculiar, almost spooky, about Bobi Wine’s story. Uninitiated in mainstream politics, his astronomic rise, in so short a period, has to be uniquely appreciated. The story needs to be more meticulously chronicled.

My ambition was to challenge Bobi Wine to release more radical music like his Nigerian comparison. Fela, who is considered the father of afro-beat, inspired a generation against authoritarianism. The more I read Olaniyan’s book, the more I found replacing Fela’s name in the pages with Bobi Wine so seamless.

It was an exciting experience: Fela’s personal struggles, his art, and eventual breakthrough as a socio-political critic were so relatable: banned music, hounded by police, jailed, his fist sign of defiance, his revolutionary bravery, his didactic-political music, weaknesses with the softer sex, and marijuana smoking, etc. were true about Bobi Wine.

While Fela claimed base at his Calcutta Republic in Lagos, Bobi Wine claimed to represent the Ghetto Republic. By deciding to stand for the presidency and actually getting nominated, Bobi Wine extended the legacy of his Nigerian elder.

That an artiste could grow from an organic intellectual to a kingmaker – and later stand for the presidency – with a legitimate claim to the seat, against a 35-year-old regime is classic history. It needs to be documented with intimate flair and panache. While Bobi Wine may never have planned this story as it is unfolding, he certainly thoroughly prepared himself for it.

It is possible to argue that hadn’t the Presidential and Parliamentary Acts got amended in 2005 – requiring politically- interested persons employed in public service and other government supported/ related organisations to resign their jobs three months to nomination – which in effect locked a sizeable constituency of our most educated compatriots into public service, as at the same time, created a vacuum that would soon be exploited by people in the private sector (lawyers, merchants, artistes, idlers, thieves etc.), perhaps we would never have had legislator Hon Robert Kyagulanyi.

It is also possible to argue that if Tubonga Naawe had not happened, perhaps Bobi Wine would never have considered crossing to mainstream politics [as response to colleagues in the industry who clearly had sold their souls for a pittance]. But most importantly, we need to emphasise the artiste’s agency as an activist who had used his trade to engage in public discourse [this chapter is long].

People Power would be born in these circumstances. Starting as a gentle reminder to ordinary folks that they had more power in their hands than those chaps in power, the phrase soon earned poetic prowess as a nationwide movement driven by the desire to kick Museveni out of office.

Partly because of the age bracket of its icon, his newness on the mainstream political scene, his difficult but inspiring life story, and his work as a dissident-didactic artiste, the country found an eloquent spokesperson and symbol. Coupled with his resume as an elite entertainer, his message and persona caught on really first.

In the ongoing election, the country has seen hundreds and thousands of new faces gaining prominence on the political scene. Youngsters, hitherto shy and unwelcome to politics have been enchanted into confident political players, activists and pundits. They are not only standing for political office, but also promising to vote. They could be mistaken in the belief that they might dislodge Museveni in his election.

But their arrival is surely permanent. For the last 20 years, there have been deliberate efforts to engineer a passive and docile political public.

This has happened through legislation and securitized practices: the suspension of the teaching of civics and political education in schools; the killing of “bulungi bwa nsi,” abolition of “barazas” and “bimeezas,” the abolition of direct taxation – especially graduated tax – have all contributed to killing the political spirit.

With cooperatives disbanded in the 1990s, Museveni succeeded in producing a sleepy-poverty-stricken apolitical public. His belief is that these sleepy bodies are easily-governable. Didn’t this man proudly proclaim that a sleepy NRM legislator was better than an active legislator from the opposition?! Because the idiot will wake up and vote!

To this end, Bobi Wine ought to be credited for this new wave of conscientisation and awakening; it is a cultural revolution. Someone ought to write this memoir carefully and slowly. It smells well even before or without this lanky dandy becoming president.

The new genertion MUST know only by bringing down the tribalistic system FIRST, then UNITY around just 1 National Leader, will give chance to a different Uganda in which they will be safe to raise their children in!

The tribalistic system only benefits Museveni & locks Ugandans with him, while the outside wold will watch in silence!

Bobi Wine is a musician, yet can't sing Ugandans to UNITY, WHY?

It's Ugandans keeping Museveni on through,

How can Museveni who owns tax money, owns police/army, for whom mps work..., be got rid of if Ugandans don't make the right moves?

It's up to Bobi Wine to ensure his memory by becoming that just ONE National Leader, without which, Museveni will never be removed & when he dies, his family business will just go on!

Have you seen how Europeans are intervewing B.Obama as soon as his memory book is out?

Would this be so if Obama hadn't been a real politician, president?

Without having chance to govern Uganda as a real country, how will Bobi Wine's memory be interesting & to who?

Migrant Museveni is the only one who has right to campaign in the country he owns & tribalistically divided & rules, right?

Uganda is a tribalistically divided & ruled zone that will belong to Museveni & family for good, unless Ugandans bring the tribalistic system, UNITE to end the family business!

Until Ugandans decide to be ONE people, they are alone with Museveni & family for good, while the outside world will watch in silence!

The question is; Why are Ugandans ensuring Museveni's family business through the tribalistic system that lockes them with him & family?

Developed countrues will NEVER say a word against Museveni because tribalists Ugandans are the ones maintaining the tribalistic system, which means Ugandans still want Museveni to ensure tribal division, thus Museveni's continuity!

Which outsider would dare bring trouble to peaceful tribalistically divided & ruled Uganda by getting at Museveni & to impose who on Ugandans?
Report to administrator
1234