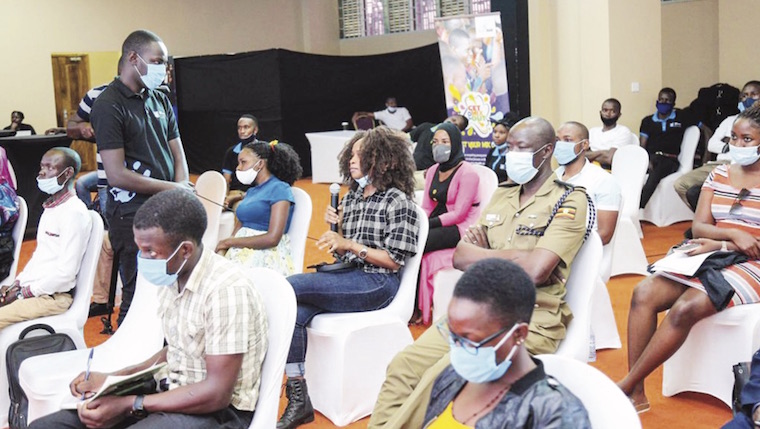 Youths meeting at a workshop recently

On Saturday, October 24th, 2020, I made a presentation to a group of youths at a conference organised by Nnabagereka Development Foundation in partnership with UNDP, BBS Terefayina, and CBS radio. The presentation was in Luganda.

For the sake of wider audience, I will serialise an English translation here with some extensions. First, it is important to clarify that my understanding of peacebuilding acknowledges but stretches beyond mere calling upon people to keep calm, not to fight, to love one another, and to reconcile. It includes using various means to fight for justice, including violence as the last resort.

As the legendary Jamaican reggae icon Peter Tosh sang, there can be no peace without justice. Injustice is one of the root causes of civil strife and violence. Injustice promotes elements such as poverty, death, social disharmony, psychological harm, physical torture and various other forms of suffering that are prohibitive of peaceful living.

Non-violence, as popularised by Mahatma Gandhi and Martin Luther King Junior, would be the ideal way of pushing back against injustice. However, non-violence also has its limits. That is why even those who preach non-violence do not oppose armed security.

This is an admission that, should push come to shove, violence might be necessary. This argument is passionately elaborated in Mr Yoweri Museveni’s Bachelor of Arts thesis (1971) titled ‘Fanon’s theory of violence: Its verification in a Sub-Sahara African territory’. Some people have had to go to war in order to build peace.

When Mandela was asked about their choice of resorting to armed struggle against Apartheid, he said: “There are many people who feel that it is useless and futile to continue talking about peace and non-violence against a government whose only reply is savage attacks on an unarmed and defenceless people.”

My view on peacebuilding and the people who have contributed to it in history is mindful of all the above dynamics. The theme of youth and sustainable peacebuilding is crucial, especially today in Uganda where we have one of the biggest youthful populations in the world that is at the same time one of the least represented in high places of national decision-making.

Due to a number of challenges, the number of youths that despise themselves and end up drowning in self-pity is growing. Many are getting consumed by greed, get-rich-quick scheme and self-interest. Looking at their circumstances, many young people could be asking themselves: ‘poor we, what can we add?

Where is our space for contributing?’ Our ancestors cautioned that a person who will fail to slaughter a goat gives the excuse that it is looking at him. The best way not to commit to do anything is by creating an excuse. There is a difference between reasons and excuses. The purpose of narrating this account of people who have achieved a lot for their societies at a relatively young age is to inspire/challenge young people to believe in themselves and in their capacity to work for a better society, the hurdles notwithstanding.

It is to show them that there are others who were able to do much at a young age in even more difficult circumstances. On the basis of some of the examples I will give and many more, the young generation today should ask itself: ‘What have I done for my country, apart from my personal achievements? What can I do with all my youthful energy?

What will I be remembered for beyond personal property and relations? Are those who have done a lot much different from me?’ I will mainly focus on contributions in politics, drama, and music, starting from the era of struggles for independence. I cite examples beyond the field of politics to show that while politics is very important in shaping everything in a country, there are more ways how young people can make contributions in fighting for justice and peace in view of their own talents.

The examples I use are only demonstrative, not intended to be anywhere close to an exhaustive list. Much of what I will talk about might be familiar stuff, yet we may not have known how young the players were when they started fighting for what is credited to them. History shows that pushing colonialists out of Africa was an uphill task in most colonies. Some resisters were imprisoned, others exiled, some tortured, and many killed. Colonialists did not just say, ‘please have your country back’.

Agitation for independence took the form of complex negotiations, boycotts, protests and war. One of the clear signs that they never wanted to leave is how they cunningly maintained exploitative relations with their former colonies. Many of the people who were involved in these struggles, both leaders and their followers, were young.

At the time of his execution by the British in 1957, Dedan Kimathi, one of the military leaders of the Mau Mau uprising in Kenya, was only 37. Julius Nyerere became president of Tanzania in 1963 at 41. He had started his activism while in his thirties. In Zambia, Kenneth Kaunda ascended to the presidency when he was only 40. Robert Mugabe joined anti-colonial activism in 1960 at 36. He was imprisoned for over 13 years, attaining many of his degrees by correspondence while in prison.

In Congo, Patrice Lumumba, the first post-independence prime minister of the country and more or less the president then, rose to the position at 35. He was brutally murdered a few months after.

Many of these people were quite educated for their times and could have gotten good jobs in the colonial governments if they so wished. That they chose to take a harder path in line with their convictions against colonial injustices speaks volumes to young people today. To be continued next week.

Please don't take offence. You advised me to find out the definition of peacefulbuilding, so why can't you answer my question? Again where can I find violence as an option in the peacebuilding process?
Report to administrator
+1 #32 Spire J. S. 2020-11-04 01:37
Remase, I refer you to the article because that’s where I briefly elaborate my own understanding of peace building. You seem to be asking for a book definition.

The notion of peace building is variously understood in peace scholarship. That is why one needs a ‘working definition’ in approaching it so as to avoid being confused with the many other possible interpretations.

I provided mine and gave reasons for it. I suppose you’ve heard of the adage that ‘if you want peace, prepare for war’. It is rooted in one of the conceptions of peace building that do not exclude the possibility of war for peace.

Is it news that some peace missions have involved fighting? In scholarship, one is not always bound by one definition where they have reason for going beyond it.

I do not understand the relevance of the question on destructive conflicts that you insist on in view of the article. Peace is not only built in response to war since peace does not mean mere absence of war
Report to administrator
1234