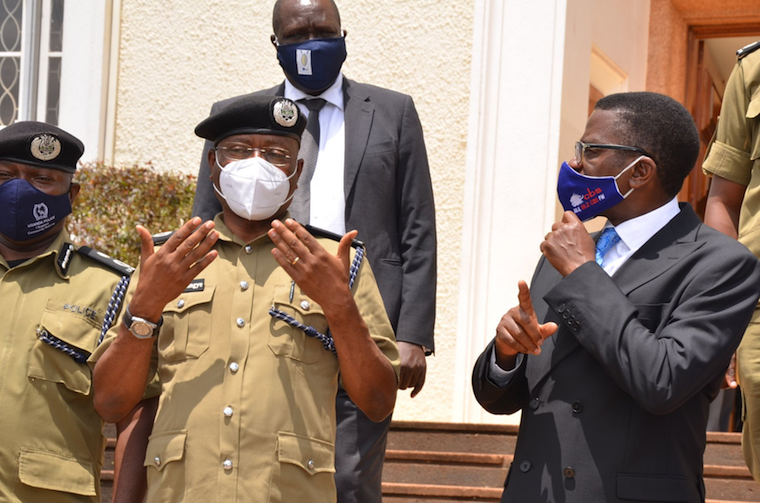 Recently, Uganda Police Force (UPF) top officials have been on a charm offensive with the Buganda kingdom and the Catholic Church to atone for the sins of their officers who fired tear gas at Mbogo clan members attending a thanksgiving ceremony.

The clan members had gathered at their ancestral site at Mugulu – Ziggoti town council to attend prayers for their leader, Gajuule Kayiira Kasibante. The mass which was being led by retired Masaka Diocesan Bishop John Baptist Kaggwa was disrupted by the tear gas.

Earlier, the police spokesman Fred Enanga had explained that police and the army had fired tear gas because the people had not observed social distancing which is one of the standard operating procedures for preventing the spread of Covid-19.

The act of police leaders reaching out to those who were wronged by their officers is humbling and novel in the way UPF relates to citizens. But, is not adequate.

It is not clear why DPC Mwine-Mukono, who wronged the religious leaders and clan members, did not personally apologise to them! Did the police leadership decide to shoulder the burden on behalf of its errant officers?

It is also unfortunate that police decided to transfer Mwine to another station in Hoima district. A transfer may not serve as a disciplinary measure. No wonder the leaders of Hoima have indicated that they would not have Mwine whose conduct is questionable and under investigations as their police commander.

The police ought to have shown that the act of Mwine and his other colleagues was deplorable and they deserve to be tried in the Professional Standards Unit. Mwine has a pending court case.

The Mityana municipality member of parliament, Francis Zaake, has taken him to court to personally answer charges of assault and torturing him. Police ought to discipline its officers in order to prove that they meant well when they sought the forgiveness of the church and the kingdom.

Some officers who carry out their duties with impunity ought to know that they are not above the law.

Where Bobi Wine, the terrorist UPF and their cousins, UPDF, CMI, ISO, ESO, you name it, will always use tear gas on innocent wanainchi.

The chap is a real pain in the ass for this regime. The leopard's ass needs deworming, and often than usual.
Report to administrator
0 #2 Lakwena 2020-10-29 12:00
In other words, in any Public Relation (False Relation), just like their boss, Mr. M7; the Police does not mean what it says and/or says what it means.
Report to administrator
0 #3 Apollo 2020-10-29 21:32
Buganda has an old bitter score to settle with Gen. Museveni over his betrayal of an unwritten agreement that enabled him achieve success in the 1981-1986 war.

Gen. Museveni picked a very important lesson during that war: Once Buganda has united over a cause, however mundane, there is no force that has stopped it in the last 1000 years of its existence.

Gen. Museveni has used his power to institutionalize, constitutionalize and vilify Buganda in order to frustrate its attempts at uniting against him. This to date may rank as his greatest achievement.

On the other hand, opportunities for a confrontation appear every now and again, and the Mbogo clan gathering was one. Gen. Museveni the strategist was aware of what was at stake and demanded that the Police top leadership immediately makes a public show of remorse.
Report to administrator
0 #4 Lakwena 2020-10-30 10:30
Quoting Apollo:

Buganda has an old bitter score to settle with Gen. Museveni over his betrayal of an unwritten agreement that enabled him achieve success in the 1981-1986 war. ...

Gen. Museveni has used his power to institutionalize, constitutionalize and vilify Buganda in order to frustrate its attempts at uniting against him. This to date may rank as his greatest achievement.

But Apollo, the true nature/attribute of "success" is that it does not cause harm. Success benefits all and deprives none.

In other words, Mr. M7's so call "success" is actually a failure. A failure that places him and all the people who supported him in executing his authorship and mastery of violence on the wrong side of history.
Report to administrator
0 #5 Lakwena 2020-10-30 10:46
It is unfortunate that to date, many Baganda do not know why Mr. M7 started his war in the Heart of Buganda (Luweero).

Most wars are deliberately designed and executed in order to capture premium territory/land. E.g., Hitler invaded Poland in order to get more land for the Germans.

In the battlefield and peripheral, sometime the whole family is wiped out and the land will lose ownership.

The purpose Hitler's Genocide was to dispossess the Jews of their properties and what they had built.

In other words, during Mr. M7's carnage, how many families/neighborhood in the Luweero Triangle might had been wiped out and nobody to make claim for their land?
Report to administrator
0 #6 Lakwena 2020-10-30 11:00
Why was there a Genocide in Rwanda in 1994? It was because the Rwandese, the Kagame of this world who were in the Diaspora had nowhere to return to.

In other words, suddenly how many families got wiped out and the homes and land remain vacant, with no one to make claim after the bloodbath.

That history includes the vilification demonization of the vanquished.
Report to administrator
0 #7 kirya 2020-11-03 07:04
m7 and his fellows will not have a place to run to because they messed up the country !!

When the tables turn the eyes of Ugandans will be everywhere!! The anablers will not be spared.
Report to administrator