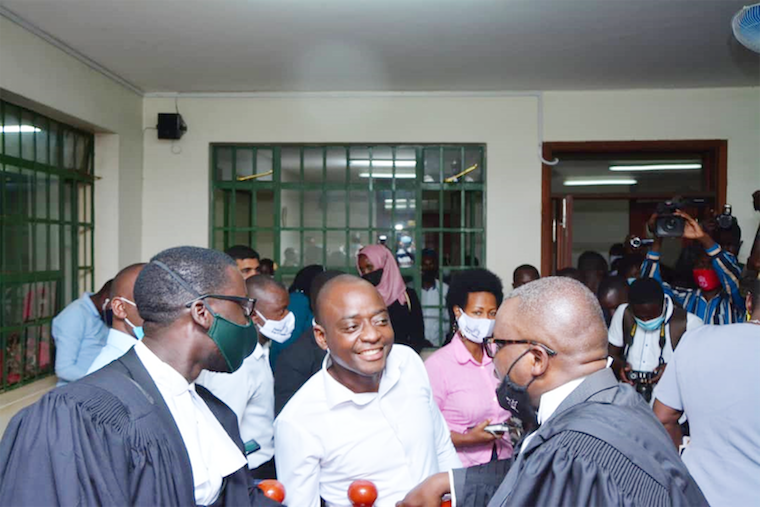 Hamis Kiggundu with his lawyers in court recently

There is the Italian Job. But we have seen many of these movies where thieves hitherto working together get double-crossed by some of their members. It is often a trust issue or greed. And at this stage, this often action-packed movie only gets more interesting. The most violent of this gang or the smartest of them all takes the day.

Any educated analysis of the Hamis Kiggundu and Diamond Trust Bank affair has to step outside of the legalese of this squabble to get to the bottom of what is at hand. We do not have a legal nor financing question, but rather a political, capitalist disagreement.

Two former co-conspirators are going at each other in a deal gone bad.   Indeed, when the curtain finally comes down, neither DTB nor Hamis Kiggundu are innocent.

Didn’t we say that under liberal economic regimes markets reign supreme – in the spirit of willing buyer willing seller. That is, banks should transact with their clients without interference from the state! Well, sadly, as it stands now, Bank of Uganda/ministry of Finance are under pressure to weigh in on the court decision.

Not sure what BoU is being asked to do here; service the loan on behalf of Hamis Kiggundu or overturn the ruling – allegedly for the health of the banking sector?

In a blatant feat of blackmail, banks operating in Uganda – under their cartel, Uganda Bankers Association (UBA) – have halted all transactions on government projects. The movie can only get more interesting – more violent.

But let’s start from the beginning before the very eloquent UBA executive director, Wilbrod Humphrey Owor accuses me of cheap moralising, and exhibiting “significant gaps in my financial literacy.”

Besides being told that Kiggundu is a businessman involved in real estate, and the service sector, I have struggled to appreciate his wealth in concrete terms – so as to be found creditworthy of such humongous loans. As a student of political economy, I am acutely aware that wealth is created through working the land, and employing labour.

Most of our renowned rich men – here and abroad – exploit the land [agriculture, mining] or use hands of men and machines to produce wealth [manufacturing, construction, travel industry, etc.]. These items produce a chain that creates more wealth along the road.

Anyone involved in this chain qualifies the label, rich, and businessman. Actual rich people do concrete visible things. Surely, a man fighting for ownership of a market square isn’t rich!  Maybe media houses have not been generous enough to help us appreciate the genius of Kiggundu.

Besides a small building opposite the Makerere University main gate [built in a road reserve as Mayor Lukwago has often told us] – housing a supermarket and cinema hall, and the downtown arcade, Owino Market, I am left with very little while looking at Kiggundu as a businessman worthy of million dollar loans.

How did Kiggundu make his first million? Did I miss any clues in that little book selling in front of supermarkets? Neither am I convinced that Kiggundu is transacting business in the name of his rich parents.

My sense is Hamis Kiggundu is as broke as all of us. The difference is that he has connections to men investing and transacting in politics.  A thoroughly investigative story in The Observer in 2016 by Sulaiman Kakaire, “what Bailout seekers have in common,” has some clues.

Kakaire cites Ham Enterprises as one of the companies that had borrowed money without any investment entered in the Registry for years before applying for bailout in 2016.

Noting that this would be sheer coincidence, the story also suggests that the monies Ham Enterprises borrowed were partly spent in financing the NRM 2016 election. At least Shs 200m is confirmed as having been donated by Kiggundu to the Museveni campaign. His profits? Maybe.

Readers recall that front-page picture of a dandy Hamis Kiggundu showing some hazy artistic impressions [likely of a planned facelift of Nakivubo Stadium] to a half-interested Museveni. That picture could be all of Kiggundu’s capital. Indeed, in 2017, he ostensibly facilitated the overzealous then minister for Kampala, Betty Kamya to take ownership of the market and the stadium.

As the incomplete COSASE investigation in the dealings of central bank showed last year, BoU is itself a den of political and foreign interests. As the investigation wore on, BoU could not explain the grounds upon which it closed seven home-grown banks, Teffe, Uganda Commercial Bank, Uganda Cooperative Bank, Greenland Bank, National Bank, and more recently Crane Bank.

The central bank was faulted for missing “inventory reports, and minutes on the closed banks.” It was also faulted for “lapses in security that could have led to the theft of vital documents.”

This report exposed to us the messy environment in which banks happily operate. Among other things, these banks are playing politics, pursuing own capitalists interests in conspiracy with the state.

Uganda Bankers Association’s Owor didn’t write any Op-eds on this one. Is it not surprising, therefore, that DTB would give out a humongous loan to a businessman with no credible business profile.

Thusly, any legal-financial discussion, however deeply technical, is the musical end credits to this terrible remake of the Italian Job. Many people have to be credited.

The situation is so disturbing, yet we seem to forget it's change of governance needed FIRST, if those in posts are to behave differently, through real humane principles & laws under real governance!

The entire world is so confused, so Ugandans MUST really wake up & UNITE to bring change, before they finally help Museveni destroy them & thier country for good!

Yet, Ugandans are doing everything they shouldn't;

- prepare to legalise Museveni through yet another
fake election!

What would bringing down the tribalistic system & UNITY to end Museveni's diabolical rule cost, other than FREEDOM to form the kind of governance Ugandans want?

What will Ugandans gain by keeping Museveni in power +35 years?
Report to administrator
+1 #12 Remase 2020-10-19 09:11
Akot, it's not easy to open each and every eye of our fellow Ugandans to see who really M7 is, a hard core criminal, whose only interest, is to make Uganda a family property. Let me say this, M7 was helped by Buganda to capture power.

M7 has maintained his grip on power because Mengo/Kabaka Mutebi are in bed with him. Look, each year Mengo celebrates for M7'S continuation of looting our nation!

Let's be honest what's there to celebrate? Mbu Omutanda jali ateredde! Oh really? Are these people blind to M7's land grabbing in Buganda? I certain they are not but selfish. Mayiga is protected by the army. And one would think that Omutanda's Lubiri in Banda is an army barracks!
Report to administrator
-1 #13 James Mukwaya 2020-10-19 23:55
@Remase

You forget that M7 was trained and groomed into leadership by a Langi President.

without this training, he would be a no body. Leave Baganda/Mengo out in your tribal/political tirades
Report to administrator
0 #14 Marvin ya Kuku 2020-10-20 00:13
Quoting tadeo:

i guess since prostitution is illegal I should sue all the prostitues I have slept with to give me my money with interest..

Ugandans are in a world apart, behaving as if Museveni is there for ever! When Museveni dies, will his family member replacing him also be a lame duck needing tribal leaders in posts?

The non nrms fighting to be mps are making things easier for Museveni already assured of 40 years in power!

No normal people would go for any kind of election organised, controlled by a monster in power for 35 years, but would UNITE & come out to block & leave him no other options, but to stand down!

But Ugandans are busy legalising the monster to ensure he rules in peace, legally, officially & constitutionally!

Having no tribal land in Uganda is a blessing for Museveni, the only one free to campaig on any tribal land!
Report to administrator
+1 #16 Remase 2020-10-20 14:44
Mukwaya, it's not the Langi president who taught Mayiga how to urge us, the nation, to accept M7's rigged elections.

Do you mean to tell me that Mayiga is the only Ugandan who doesn't know that M7 rigs elections?

Or better still, that M7 is the worst of all? Mengo/Mayiga bagwa mu bintu. Bali mukintu era they don't want or need any change. Afrigo sings, "Bela'wo to'ja wo awo." That M7 is the best we should maintain the status quo!
Report to administrator
0 #17 Arnold Muwa 2020-10-20 19:04
Quoting Marvin ya Kuku:

i guess since prostitution is illegal I should sue all the prostitues I have slept with to give me my money with interest..

This quote amused me

Mukwaya is blinded by tribal allegiency & doesn't see the danger Museveni poses to ALL tribes!

By now, even Buganda should know it was used by Museveni to come to power, he still uses it to ensure his lifetime rule!

Every tribe MUST wake up as ALL are concerned & in danger & things will only get worse as Ugandans fight one another while Museveni will rule in peace beyond 40 years!

Without bringing down the tribalistic system & UNITY, Ugandans MUST form independent tribal states & this before they stupidly legalise Museveni through yet another fake election!
Report to administrator
12