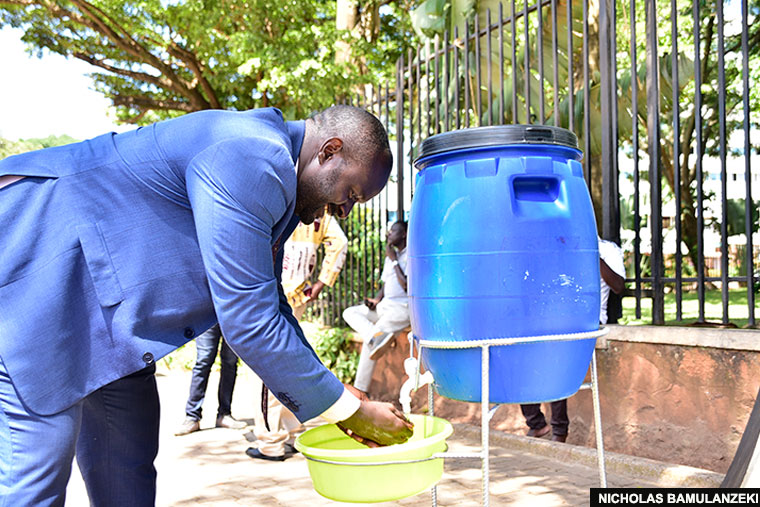 The ministry of Health recently carried out another round of Covid-19 tests on selected members and staff of parliament as one of the several measures put in place to prevent the spread of the coronavirus among the categories of people and in the Parliament Building.

Several measures instituted by the parliamentary commission in March 2020, upon the onset of the pandemic in the country, remain in place and may generally be the reason for stemming the spread of the outbreak within the precincts. This, despite the continuation of House plenary and committee sittings, as several government and private institutions cut back or totally suspended some or all of their operations during the same period.

The measures, including mandatory hand washing, sanitizing, wearing of masks, working on alternate days or shifts to avoid overcrowding and maintaining a social distance remain in place. These, together with the regular tests, are supposed to give an example to other institutions as well as individuals to emulate.

House plenary sittings, which ordinarily attract over 200 members, were moved from the chamber, first to the Conference Hall and then to a tent on the top (ground) level of parliament’s vehicle parking lot.

In addition to this, the plenary is now limited to a few members, with lists of scheduled legislators from NRM, and opposition parties, FDC, DP, UPC, Justice Forum and independents issued beforehand. This is still intended to avoid crowding and observe social distancing within the chamber. A maximum of 100 persons in all (including staff and technical persons) is permitted to attend a sitting at any one time.

The Parliament Building is home to 450 members and an almost equal number of staff. On a good day before March, the building would host an average of 5,000 visitors. These numbers as provided by the police and sergeant at arms went significantly down, to less than one hundred, due to an almost total ban on visitors in March (only a few, however, can still be allowed in).

The speaker has played her role, wearing a face mask while chairing sessions and officiating at various events were she is invited including the recent Rotary Virtual Cancer Run.

In photographs, one can clearly see her attempts as well as those of the organisers to maintain safe distance. The deputy speaker has also been seen at various events and during campaigns for NRM CEC positions properly donning a face mask.

Meetings in parliament have tremendously gone down and the few which take place adhere to strict SOPs. But there is now a cause to worry. Recent incidents in the political field are likely to threaten the gains or efforts in the Parliament Building to prevent an outbreak or spread of the virus there.

Political parties have commenced activities, including nomination of candidates in preparation for the upcoming general elections. Parties have held or are holding meetings of their various administrative structures. The Electoral Commission will soon be conducting the nomination exercise for candidates for presidential, parliamentary and local government aspirants.

With the exception of a few, almost all current legislators are involved in preparations and will be standing for seats in the general elections scheduled for February 2020. All these, despite guidelines by the electoral body and approved by parliament, are attracting huge crowds in total disregard of standard operating procedures.

Videos circulating on social media show legislators or other political office aspirants in crowded meetings where participants are neither donning the required preventive masks, nor social distancing, washing hands or sanitising. These not only cause risk to the population but also to everyone in the Parliament Building.

When this blatant disregard of SOPs continues, all measures instituted by the parliamentary commission may come to naught, as legislators return to the building where measures remain in place.

At this stage, legislators out in the field seeking votes must observe social distancing, wash hands or sanitise and appropriately wear masks, as these will give meaning and move along with similar measures in parliament. It is from such examples that we can also ask other institutions around the country to learn from and adopt the examples set by the August House.

But for now, it’s like one step forward, one step back!

The author is the principal information officer, Parliament of Uganda