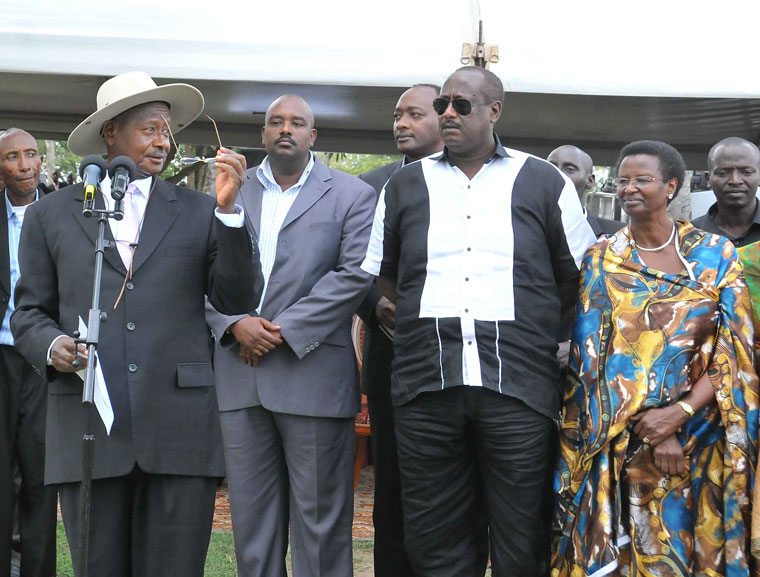 President Yoweri Museveni with his siblings

It must be a painful fact that it will take the collective work of Col Kizza Besigye, Bobi Wine, Asuman Basalirwa and other activists for NRM insiders to depose Museveni.

Yes, People Power, and all Defiance campaign activists can only inspire NRM insiders to see Museveni as a liability and end his reign.  Dear reader, this hurts – and is surely difficult to imagine for these activists – that their only contribution can be forcing Museveni’s co-conspirators to take over from him.

But once this happens, the activists would have done their job.  Again, it will be for their painstaking activism – not any electoral nonsense. Generals including Muhoozi, Salim Saleh, Wilson Mbadi, Charles Angina, Elly Tumwiine, merchants such as Moses Karangwa, Sudhir Ruparelia, Mohammad Alibhai (the man with 700 titles of land in Kampala), the Nyekundire group – have to be forced to see urgent need to cut ties with Museveni.

They will not hold onto power for as long as Museveni did, but a transition has to start with them. Ironically, it is their recognizable worst – their closeness and likeness to Museveni – that makes them suitable replacements. Then, it might take another 10 years, five or less to cross to someone straight from the opposition. Let me explain this undoubtedly unpopular position of mine:

If there are any lessons we can take from the Egyptian uprising that ended in the overthrow of Hosni Mubarak, it is that change under ‘electoral autocracies’ is not only internal, but is also forced and comes by way of street protests and increased activism. It is difficult to move from a fully established old autocrat to someone fresh from the opposition.

The reason is this: aged autocrats are often a conglomeration of selfish interests – local and international – that coalesce in them. The autocrat is the face of these interests.

See, it is not true that Museveni (replace him with Mugabe, Mubarak, Biya, Kagame, Keita, Barre or Ben Ali) has clung to power for his singular interest to govern, and individual genius. There is a great deal of his individuality, of course.

But mostly, Museveni has stayed on this long because both foreign and local interests see him as a credible guarantor of their infinite access to resources here and in the neighbourhoods: land, natural resources such as oil, timber and gold government tenders, among others, sustain Museveni in power.

He is the face all the hungry hyenas feasting on Uganda’s half-life body. And Museveni has so deftly made himself available for use. Please note, however, that although their – Museveni and those around him – interests are mutual, the most powerful shareholders in this affair are the local and international thieves.

These thieves do not exactly have guns in their hands, but they actually own all guns in the country. They also have money, a lot of it. Their declaration of support for Museveni is not because they really love the man, but they see him as the problematically self-interested ally who also guarantees their interests. [And Museveni knows well that all those chaps singing his praise do so for own self-interest].

Take for example, it is not possible for the United States to support Bobi Wine or Kizza Besigye if they are not sure about their positions on keeping Ugandan troops in Somalia, Central African Republic or South Sudan. Because here, the United States itself has selfish interests.

They would rather support Salim Saleh – who will sustain status quo in the short term – as they buy time to readjust themselves, and work to conscript the new fresher candidate from the opposition. This takes some time.

Morsi messed up this calculation after the fall of Hosni Mubarak, but it did not take long for these foreign interests to support a coup that took him out of office – and returned a Mubarak-ist!  For they were not sure about where he stood on many issues including the Nile and Israel.

At home, there are fellows under Nyekundire, renowned for, among other things, importing and trading without paying taxes, and getting all the lucrative government tenders.

There are also local predators with their fangs deep in Bank of Uganda, NSSF, big deals in the oil industry, electricity and telecommunications.  These cannot look on as Museveni collapses. They will hold their ground using their money and ammunitions to sustain the status quo. And the compromise is having a new face in either Saleh, Kataaha, Muhoozi or other. But the principle is one: the new face has to be one among them.

But let’s get this straight: these changes are not negotiated, but are rather forced through revolutionary uprising – not any election nonsense. And this will be the contribution of the present heroes of the opposition.

PrinceM, why should you have plan B if you are on a sure deal?

Why should you go into the elections when defeat is certain? We aren't going into elections for the first time. That's why you said that you know that M7 rigs elections. You know because he has done it before.

Not once but always! Why should we keep doing the same thing over and over?

It's clear that it's for selfish reasons. Kyagulanyi and company are just in it for their own interests.

As Kato Lubwama said, "elect me so that I can also eat."

It's difficult to educated the rural population on the myth of Museveni being invincible.

He has corrupted and brainwashed Ugandans, with the help of his many brutal militias.

Unfortunately, our so-called intellectual elitists are only busy trying to destroy one another, instead of educating those who do not have the privilege of higher education about this corrupt regime.

They only waste their times lecturing us how to behave and morality by playing the social media police. Which is a complete waste of time.

Power always originates from the bottom up; from the semi-educated in the villages (local people) to those with book- education.

Every voice should always be heard and should matter in a free and fair society. It's not about, how you tell the truth, but the content of the truth, which should matter. Many people don't get that.

Ugandans are so perfect in moralising/getting at one, yet intentionally ignore the fact that it's them keeping Museveni in power through the tribalistic system that developed world now knows, reason they are quiet!

Not even tribal leaders see they too, are silenced prisoners, but used by Museveni to ensure Ugandans are POWERLESS!

Not even Dr Besigye nor mp Bobi Wine see it's second independence needed & without bringing down the tribalistic system & UNITY, there is no future after Museveni in a peaceful organised Uganda!
Report to administrator
0 #54 Akot 2020-09-27 14:22
PrinceM, understood, but,

Museveni knew right from start how to hold Ugandans by the balls;

- Replaced the then Parliamentary Election that
brought to presidency the candidate with majority
MPs.

Would Museveni be in complete control & rig at will, if it was the then Parliamentary Election through which Ugandans brought a candidate to presidency?

Only bringing down the tribalistic system & UNITY is needed, if Ugandans want Museveni out, then chance to put in place the kind of governance they want!

Bobi Wine isn't allowed to walk on streets, has no permission from Museveni to sing to Ugandans, so how is he going to campaign & win?

Does Museveni look, talk, act as if he's going to leave State House to another through election he organises/controls?
Report to administrator
+1 #55 Remase 2020-09-27 23:38
Akot, my love, l'm choking on the 35 years. I can't take it any longer. But Ugandans like wooden K and PrinceM are asking M7 feed us more.
Report to administrator
-1 #56 PrinceM 2020-09-28 00:50
Akot I prefer to ignore your posts because they are so monotonous and many times illogical. You keep mentioning the tribalistic system.

In the current presidential race where is the tribalistic system? You keep calling for unity and yet you are an advocate of boycott. That doesn’t make sense. In the 2016 election even though the opposition failed to unite it was a two-horse race between Museveni who got 61% and Besigye who got 36 %.

Unfortunately, 5 million Ugandans did not vote. Besigye needed 2.5 million of these to win the election. Your argument about parliamentary elections does not make sense. NRM commands over 80% of the MPs so a parliamentary system is even worse for the opposition
Report to administrator
+1 #57 Remase 2020-09-28 06:40
PrinceM, where have you been? Sorry to ask the obvious question, I know you are hell bent on going to the bogus polls for selfish reasons.

You clearly know that we have focused on overcoming M7'S rigging but failed miserably. Electoral reforms, protecting votes, going to court, you name it.

You clearly know that for 35 years M7 has done nothing but build a water and air tight system of rigging. EC, executive, parliament, judiciary, army, police, prison, you name it.

You clearly know that togyikwata ko was meant to overcome M7'S rigging, what happened? You tell me? Term limits were also meant and focus to overcome M7'S rigging. They all failed. People power is the only solution. Let's make a stand and kick M7'S out, now. Elections will never overcome M7'S rigging. Never have never will. Period.
Report to administrator
+1 #58 Remase 2020-09-28 10:32
PrinceM, you are M7'S apologists and beneficially and the current tribalistic and nepotism system. How could you ask such a question?

No wonder you are hell bent on going to the bogus polls which you clearly know that they are already rigged. You can't be blind on purpose for nothing. Greed is what drives each and every M'S apologist. Enough is enough.

Fellow Ugandans, we need to unite and kick M7'S ass out. If Lukungana could rig elections in day light and even use the gun in the process, how about M7?
Report to administrator
0 #59 Akot 2020-10-01 17:39
Quoting Remase:

PrinceM, you are M7'S apologists and beneficially and the current tribalistic and nepotism system.

No wonder you are hell bent on going to the bogus polls which you clearly know that they are already rigged. You can't be blind on purpose for nothing. Greed is what drives each and every M'S apologist. Enough is enough.

Fellow Ugandans, we need to unite and kick M7'S ass out. If Lukungana could rig elections in day light and even use the gun in the process, how about M7?

Soon 35 years of Museveni & the world going silent will turn, after next fake election, to Ugandans being ignored for good by the outside world!

Lebanese are latest to show they are one people even without leadership & France is already by their side & given conditions to those useless leaders to aggree on forming a government or they won't get the already waiting money!
Report to administrator
123456