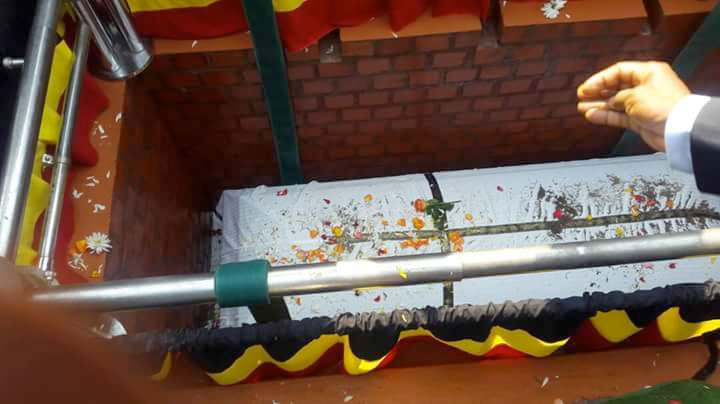 On May 15, Evelyn Namulondo succumbed to her gunshot wounds.  A food vendor in Jinja Central Market, Namulondo had been “shot by a police officer on patrol vehicle for defying an all-night curfew,” as she rod on a bike back home.

On her deathbed before she passed, Namulondo almost apologetically recounted her pain: “We begged the boda boda man to stop but he refused, which I think angered the policemen to shoot at us. I fell after sustaining injuries. The motorist sped off with the other passenger and all I recall is that the police officers dumped me here [hospital].”

Even in this excruciating pain, Namulondo saw the victims as guilty. She believed that perhaps if they had stopped, maybe they would have explained their plight – eking out an existence – and maybe the officers would have understood.

Surely, this meek character is not one to deliberately defy Museveni’s cruel directives. Like many before and after her, Namulondo died a brutal death.

But despite dying from a Covid-19 lockdown, she is not counted as a Covid-19 death. Why? Why are African governments committed to this technicality – only direct Covid-19 deaths – as they count their dead of the pandemic?

Let me nuance this a bit more: in civil wars – and fighting Covid-19 has been touted as a war – the causes of death are never limited to guns and bombs.  But all causes of deaths that were set in motion by the civil war.

To this end, while counting the dead, all deaths related to this violence are included in the tally. Deaths from starvation after war-caused challenges with access to food; deaths from failure to access basic healthcare because of intense fighting, or even deaths from exhaustion while escaping violence are all counted as deaths of that specific civil war.

Diseases that were triggered by broken sanitation – broken by war – such as cholera are counted as deaths of the war.  So, it goes down that “this war cost this number of lives,” both from direct fighting and conflict-triggered causes.

The idea is that while making sense of the carnage, counting all these deaths guides interventions not simply towards ending the conflict, but also guides recovery interventions after conflict.

Knowing the full extent of the damage requires that all conflict-related deaths are factored into the equation.  In truth, war is played at these many fronts including access to food, water, and basic medical care.  In fact, oftentimes, warring factions have often sought to fight through spaces of food, water, and healthcare.

If the above is an agreeable theoretical position, why are governments across the world, especially our poverty-stricken banana republics, refusing to count lockdown deaths as Covid-19 deaths?  This question is specific to countries that declared lockdown and also took it upon themselves to enforce it.

Figures from legitimate organisations including obstetrics and gynaecologists indicate that over 3,000 expectant mothers have lost their lives due to Covid-19 lockdown.

For reasons especially the failure to find means of transport to hospital since motorbikes and matatus were outlawed, many women have lost their lives in pain on roadsides.

Reports confirmed that six deaths occurred at the hands of the dreaded Local Defence Units (LDUs) and military police as they enforced the lockdown – as Evelyn Namulondo’s case demonstrated.

Many Ugandans receiving antiretroviral therapy for HIV/Aids risk deaths or have already lost their lives for failure to replenish their stocks.

There is more: The Uganda police reported that between March and April, 3,280 cases of domestic violence were registered around the country – much more than they have ever registered in a single year. In some of these cases, spouses and children have been hacked to death or brutally assaulted.

My question is this: why are media houses not having extended broadcasts on the Covid-19 lockdown-induced deaths? Why don’t we have 30 minutes put aside to simply put count on the carnage to life due to Covid-19 lockdown – defined broadly?

I have a series of responses that need to be understood as one whole: (a) the lockdown is terribly lacking in local content, and context. It was simply copied and pasted – as we have done to many things before.

(b) the lockdown deaths explicitly embarrass the claimed ambitions of the lockdown. You cannot offer to save people from anticipated calamity by putting them through immediate calamity. You can only do that by downplaying the immediate danger since making it visible horribly dwarfs the logic behind everything.

(c) this lockdown reeks of bad governance, and the yearning to project crude power by pseudo-autocrats.  By their definition, autocrats will find their way however grievous, inconveniencing and dangerous it could be to the rest of their compatriots. It should not be surprising, therefore that near-democratic Third World countries such as Malawi, Tanzania, Ethiopia and Burundi never locked down.

You raised a very good point about media houses not bringing these issues to the fore front. What about the so called opposition politician doing about this?

I do wonder if these morons that run Uganda really read these kind of issues that are raised here. Shamefull indeed for these men and women to make daily claims that they have contained covid 19
Report to administrator
+1 #2 Kalibbala 2020-07-01 23:24
#Yusuf..Spot on as usual!! My Questionnaire goes as follows: ! Why are LDU (Interahamwe) a Force Deployed to Shoot to Kill Wield Assault Rifles against Civilians!?..Do we have a Silent War against Wanainci going on in Uganda??

Where are the Courts of Justice?? apart of Course from One Justice Byabakama bent on Rigging Elections!!

You saw that Footage of so-called Covid 19 Patients held in Masaka Hospital without any Symptoms of the Virus and fed on Dry Beans!! Are these Signs of a FAILED State!?

NO Case to Answer the ALMIGHTY is Enjoying Life in State House!!For Him Uganda is Somalia!!!He live in his Own Paradise..
Report to administrator