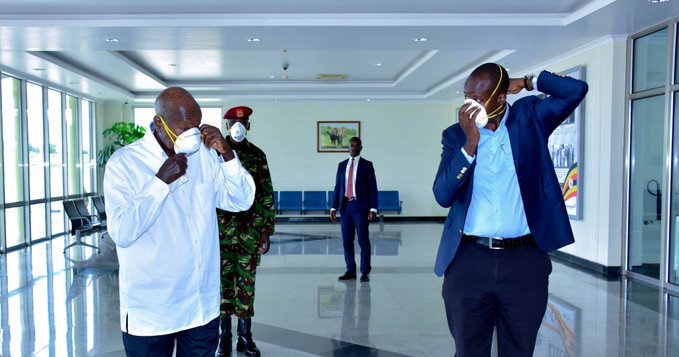 President Yoweri and his guards wearing their masks

American billionare Warren Buffett says ‘trust is like the air we breathe – when it’s present, not body really notices; when it’s absent, everybody notices’.

It is more of a truism to say that trust is the cornerstone of any private or public relationship. Where it is, complex things get simplified; where it is not, simple things become complicated.

Once it is dented, relations are bound to get bumpy, no matter how good the faith that may inform our actions. The Baganda say that a person who has ever been bitten by a snake might run in sight of a rope, even if he actually needed a rope.

Our government does not have such a good record on matters involving money; perhaps the same applies to most of our society today. Integrity has decayed in our watch over the years. The result is that whenever money comes into the picture in a public matter, many of us become suspicious and cynical.

We see potential thieves everywhere. This is not helped by the fact that even the institutions we expect to check on these vices are not spared by the spell of money either. Many will only raise dust before they are also ‘sorted’. This is where Covid-19 found us, in a thieving culture!

If the locusts were a starter, then Covid-19 was seen by some of our greedy officials as the main course. There are some well-meaning people in government that work selflessly for the public good. But their efforts are easily outshined by those of the heartless gluttons that strategically cast their nets around every national disaster.

In the first responses of Uganda towards the Covid-19 pandemic, there was indication that a big section of Ugandans had put much of the past aside and given government the benefit of doubt.

Indeed, some people in the ministry of Health were working so hard within their normal budgets. They made a couple of mistakes, but many were easily forgiven because of the several grey areas around the new disease. Something needed to be done, even though knowledge was still scanty.

Most of the first initiatives were applauded by the public even if they had flaws here and there. The applause was partly because the public was too scared of the disease threat to antagonise government, but also in belief that many of the measures were in good faith.

This was an opportunity to rebuild public trust in government, and we needed it more than ever before. All government measures to prevent the disease require public trust as a conditio sine qua non.

But, as sure as stench follows rot, when supplementary budgets and donations started coming in, our usual hyenas grabbed the steering wheel. While much of the money was necessary, it was not hard to notice that many things had been inflated.

But even if that were not considered and we blindly assumed that it was all in good faith and meant for work, merely hearing about the huge budgets was enough to awaken the suspicions and cynicism of the public. Perhaps if government was not known for corruption, there would be no noise about the money.

Alas, even those that had hesitantly given government the benefit of doubt in the hope that the threat of a killer disease would solicit new behaviour, were soon hit by the familiar ugly news from the Office of the Prime Minister! Food for the vulnerable was just but another looting opportunity! What ate our humanity!

Before the papers announcing this scandal bleached, parliament was warming up to its own bite – scheming for money even before drafting any clear idea on what to lie for it! When people are locked up at their homes in untold hardship and they start hearing such stories, what do we expect them to think?

The lockdown precaution is indeed justified, and the disease is real. We might be covered by some mystical luck so far not to have registered serious cases and death in Uganda, but it would be too quick to dismiss the threat.

Our bigger problem now is corruption and public perceptions of it. Unfortunately, many people have started doubting everything with a feeling that it could all be a grand plan to steal in the shadow of Covid-19.

Positive case trends are being questioned, recovery reports are laughed at, accountability for donations is doubted, and the necessity of the lockdown is also under public query.

It is commonplace now to hear people say ‘Let them go on with their stealing but allow us to move.”

Some have started abandoning their earlier alertness in washing hands, sanitising, and keeping safe distance. All this is occasioned by lack of trust, and, primarily, by the acts that diminish public trust.

In such an environment, sensitisation becomes very difficult because the public’s ear is lost. Recently, I drew a cartoon to demonstrate that the doubts among the public are dangerous to the people themselves and that coronavirus is real.

There was so much public feedback insisting that the whole Covid-19 thing is about money, and that they are tired of suffering while others ‘eat’!

This is a very dangerous social perception, and all efforts must be put on rehabilitating public trust as the most important measure for any other initiative to work. Government communication and accountability must be as meticulous as possible.

Actions that can very easily be misinterpreted in these times should be honestly and clearly explained or avoided to deter worse consequences.

For instance, even if parliament needed that money, it was a wrong time to ask for it given what we know that house to be capable of. There must also be deliberate efforts to transparently answer people’s questions and appreciate where they come from. Otherwise, we risk all our successes and sacrifices.

2- In case of a serious outbreak,hot spots could be locked down but so many preparations to avoid the multi-faced ripple effects. Kenya adopted that 'cautious' approach.

Tanzania, Burundi,Malawi have not implemented lock down.
3- The supplementary budget passed ,concentrated money on defense and state-house , this means COVID is not an urgent issue

In a country that has 1 death (a kenyan who died in Gulu), Museveni is making himself the only idiot ruler in the world, especially after being in hinding for a while to avoid contact with people for fear of contracting covid-19.!

But then again, the power to maintain Museveni in power or UNITY to show him way out belongs to Ugandans, right?

What are Ugandans prepared for, besides Museveni's continuity?
Report to administrator
+4 #3 Kalibbala 2020-04-29 15:16
It All started With NRA a Force around one Individual who is God from Butare...Invaded Uganda leaving a trace of Blood behind them..so far 2.500.000.People have lost their Lives..Those Dying during this Lock down are more than Covid 19 Victims...Safe Houses are Full of Decaying Ugandans..!!!

Zaake was Brutally Tortured for Distributing Food..!! NO Case To Answer..!!Moral in our Country Died with Idi Amin...They Own All Shopping Malls in Kampala but Sewage is Stinking since 1900..Promised Fly Overs..still a DREAM never to Come True...So long as they Drive tinted Cars and Four Wheeler.

3. What's their rationale for getting into Parliament? Trust at this time is a ghost we should allow to rest in peace, at least in our representative government. Fear is the only reason why many still hope...
Report to administrator
+1 #6 Wooden K. 2020-04-30 18:01
Oh Uganda , here we go again !

Now , let me begin by saying that I commend H.E. Super Glue for hearing my scream and deciding to lockdown .

I also notice that he talks calmer and almost sounds reasonable these days. I hope its not one his many tricks.

TRUST is yet to come though .
Some of us shall be excused for suspecting that this Corona crisis is being exploited by the well known vampires .
Report to administrator
+1 #7 Wooden K. 2020-04-30 18:21
Only time will tell if our dear Ruler has leart something from this.

At least , I expect him to have discovered that is is possible to run his presidency without having to fly from nation to nation .

I don`t know if he realizes that for the first time in over 40 years , Yoweri Museveni has not been on a jet flying from or back to Uganda .

Unless Ugandans take chance & UNITE around mp Bobi Wine to block & force Museveni out, there is no need for parliamentary election under him as doing so is continuing to officialise, legalise, constitutionalise Museveni, the only winner of any presidential election in the country he completely controls!
Report to administrator
0 #9 Akot 2020-05-01 19:45
Wooden K., thanks

With coronavirus in control, not only Uganda but all shitholes have saved lots of money as their useless rulers, mps, ministers no longer run to developed world for medical treatment!

How can Ugandans, not at armed war with one another, keep their common enemy in power & for how much long, +30 more years?

Would mp Bobi Wine, if given the chance through UNITY, treat Ugandans as Museveni does?

Oh! if only Ugandans could bring down the tribalistic system & UNITE to block & force Museveni out, they would have chance, to go for the kind of governance they want immediately after!
Report to administrator