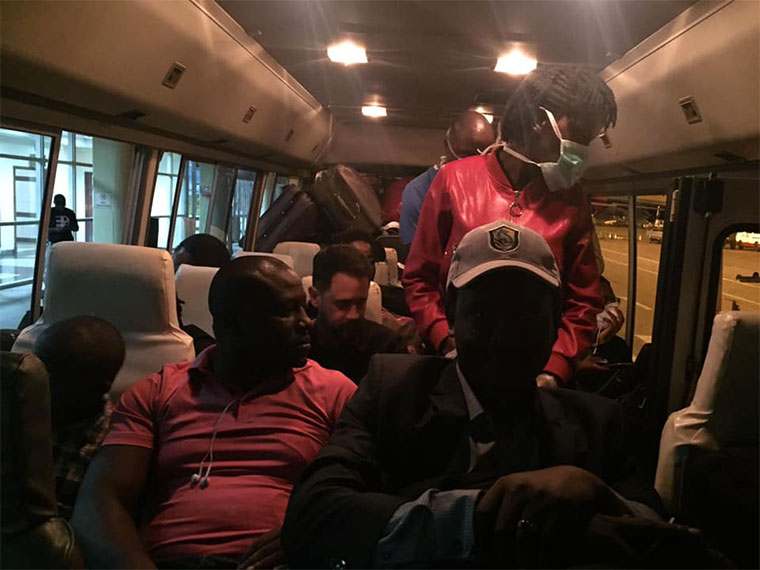 Ugandan returnees bundled into one at Entebbe airport

I have been away from this page for a while now, having gotten engrossed in the thick of this global mess. I have mostly used my privilege of space here to speak about things that are holding our country and continent backwards and things that affect our everyday lives and dignity.

I have spoken about the pervasive incompetence and impunity in our society numerous times. In many of these cases, these things didn’t really affect me directly. But this time I got personally caught up in the hands of our government’s incompetence and at the worst time imaginable.

As my Dutch professor, Caroline Suransky, who was keenly following my ordeal observed, this virus has both exposed and taken advantage of every society’s weakest spots. I said earlier here that sometimes nature is very harsh in giving its lessons. But those who don’t learn suffer repeatedly, just like the landslides and floods that strike Uganda every other year!

Many of Uganda’s problems have always revolved around bad leadership characterised by poor planning, impunity, corruption, brutality, and a high sense of entitlement among our leaders. Our approach has often been reactionary and tending to act like we have all the time.

All these came out to hit us badly in this difficult period. Some of our government officials are working hard to contain the situation, but they can hardly do much under the rotten political culture they have allowed to eat up the country for years. Where they are not beneficiaries in the crisis, they are also desperate before the monsters they’ve been feeding.

My story short, I had to abruptly end my research fellowship at Cambridge to return home as news of flight cancelations and bans kept increasing. I had done my homework, and knew for sure that, coming from one of the Category 1 countries, I was required to self-isolate for 14 days.

Mine had been a very long journey; 24 hours, including a 12-hour layover at Dubai. Reaching Entebbe on 18th March, we were informed that the president had just passed a directive that all passengers from Category 1 countries were to be institutionally quarantined, and it was being implemented immediately.

The reason for this change of strategy was understandable, people were violating self-isolation. But that it did not cater for those that were mid-air when it was passed was unfair! Moreover, the level of official disorder at the airport was not forgivable; for all this was not stuff that couldn’t be predicted in good planning. Nevertheless, it was characteristic.

The health desk was controlled by young ladies and men, seemingly in their 20s. They could not answer most of our simple questions on procedure and safety. They were mostly keen on robotically enforcing the directive, although porously too. My connection flight mostly had returning migrant workers from Dubai with whom we mingled.

But the robotic health desk officers simply singled out those with high temperatures and us from Category 1 countries and let the rest go! One gentleman from Dubai whom we later learnt to have been found with a high temperature had been let to sit among other people put aside for quarantine!

Meanwhile, despite our protest, and in the presence of the police, some relatives of ‘big people’ were being sneaked through. As they say, if you give a fool enough rope, he will hang himself. Here they were, thinking that their usual impunity was still in their favour, yet putting the entire country at risk! I later learnt that some were bribing their way through!

I learnt that the president later privately condemned some of the ministers involved (because it also exposed him to risk) and that the minister for Health and her permanent secretary also castigated it. But because we have normalised such unethical political conduct, we got neither apology nor resignation! It is as though this country swore to stick to its vices - for better, for worse.

We waited for over five hours at the airport in untold confusion as they planned on where to take us. Look at this! The pandemic had been on for over three months. There were all signs even to the slowest of minds that the virus would ultimately get everywhere. We were lucky to be among the last places to be hit and therefore have so many lessons from affected areas.

Yet still, true to our slumber, greed and incompetence, we didn’t even have one ideal quarantine center that was ready! What had we been doing all along in preparation! We were among the first groups to be ‘quarantined’ by government, even before Uganda registered the first Covid-19 case. But there was hardly any semblance of commitment to following basic quarantine measures.

We were packed in a van and taken to Central Inn at Entebbe. How it was selected, I don’t know. The first group to get there was charged $100.

Ours was told $60, only bed and breakfast. Though we had only learned of the policy on arrival and some among us were returning students, we were expected to have cash! Many of us slept in the lobby of the hotel; either way, it was already 3 am by now!

On the third day, the rate was reduced to $55 for full board! How was it possible to drop from $100 without meals to $55 full board if there was no opportunistic overcharging initially!

There was hardly any health officer to attend to us at the center until the evening of the third day when someone came to take temperatures for those who wanted to check! And this was only after making noise.

We had literally been detained there to cough foreign currency at high risk of infection. The hotel workers had hardly been trained on how to conduct themselves at a quarantine center. They were equally at risk, yet free to move out!

To be continued next week…

I was here screaming and asking why President Yoweri Museveni was so quiet.

Okey you blame our problems on poor planning, impunity, corruption. What you leave out is that we, (the ruled) forget too quickly.

We do not ask right questions.

What we hear is how Museveni has adressed the nation 5 times , banning this and that ; but ,when is he going to be blamed for keeping our entry points open for so long when all other nations were doing it?

Now we know that the evidence we have so far is that those who travelled via or from Dubai are the ones that come with the virus.

Museveni is a virus that travelled & settled in Uganda & MUST be got rid of, if our people want to be owners of their land!

Corona provides chance for Ugandans to ask the overdue hard questions in its aftermath and possibly redirect our country.

I hear praises for the ministry of health and I wonder! Do Ugandans even know how a functional ministry works?

We are all culpable and as guilty if we let Museveni continue to destroy our country.

A people who want a better future for their kids do eveything in theie power to bring change of governance!

After 34 years, how can Ugandans go along with Museveni & the disgusting isolating tribalistic system that locks them with Museveni for good, while the outside world will just watch in silence?

Ah! Ugandans have become so perfect in ensuring Museveni rules for life as if he's eternal & they won't have to look at each other in the face ever!
Report to administrator
0 #13 Akot 2020-04-03 18:01
Quoting Kalibbala:

Karibuni Doc. NRA came to Loot and Survive on Ugandans Anyhow! We supplied the Manpower to Die in Luweero and Now We are the Consumers and Taxpayers...sustaining a Gluttonous, eartless Lot of Cattle Keepers.

The Almighty will Continue with his Luxurious Life. Many might die of Hunger. No Case to Answer. He left 2.000.000 Dead in the Jungles of Luwero and Congo. Killers Do not Feel the Dying Until Gabriel knocks on their Door.

Yet, all Ugandans have to do is bring down the tribalistic system, UNITE & block Museveni to leave him no choice but to stand down!

Then our people will have to either;

Why is the divisive tribalistic system still standing, ensuring Ugandans are powerless slaves in the zone formed by their tribal lands?
Report to administrator
0 #14 Akot 2020-04-03 19:05
Quoting Umukosi:

What has really befallen this beautiful country?

If Ugandans don't learn from this crisis then, they
should be put in chains and toil like beasts,
because they wouldn't deserve ANY BETTER THAN
M7's JUNTA and thieves.

It's time tribal leaders stand down & Ugandans UNITE, to finally get the kind of governance they want!

What Ugandans are letting Museveni do to them, their children/grand kids makes no sense & is as if they have no human feelings!

Museveni has turned Ugandans into slaves, criminals fighting one another to keep the demon in power at all cost!

15 tribes, but not 1 has leadership to FREE its people from enslavement!

Ah! Ugandans are slaves of a migrant they gave shelter to?

Not even outsider Acholi have the leadership to save its people from Museveni & give them chance to live FREELY on their land?
Report to administrator
0 #15 Akot 2020-04-04 18:46
Dr Jimmy Spire Ssentongo,

Are youstill in isolation to ensure you are not inffected & won't be a danger to Ugandans who come close to you?

Oh! I wish every Ugandans, especially those in villages could watch World News & see how USA/Europe are in lock down, not knowing what the situation will be with the covid-19!

Ugandans, USA/Europe are calling for UNITY 24 hours a day & know it's only way they will fight the common enemy - covid-19!

Museveni is more dangerous to Ugandans than covid-19, yet they maintain the tribalistic system & ensure his lifetime rule, even knowing no developed well run country will say a word against Museveni as it's our people, the tribalists, alright with the inhuman system of rule!
Report to administrator
+1 #16 kirya 2020-04-05 02:50
lWe cannot learn because we have cow keepers as leaders.

They are looters and just care about lining their pockets! It is time to pick up armies to fight back
Report to administrator
12