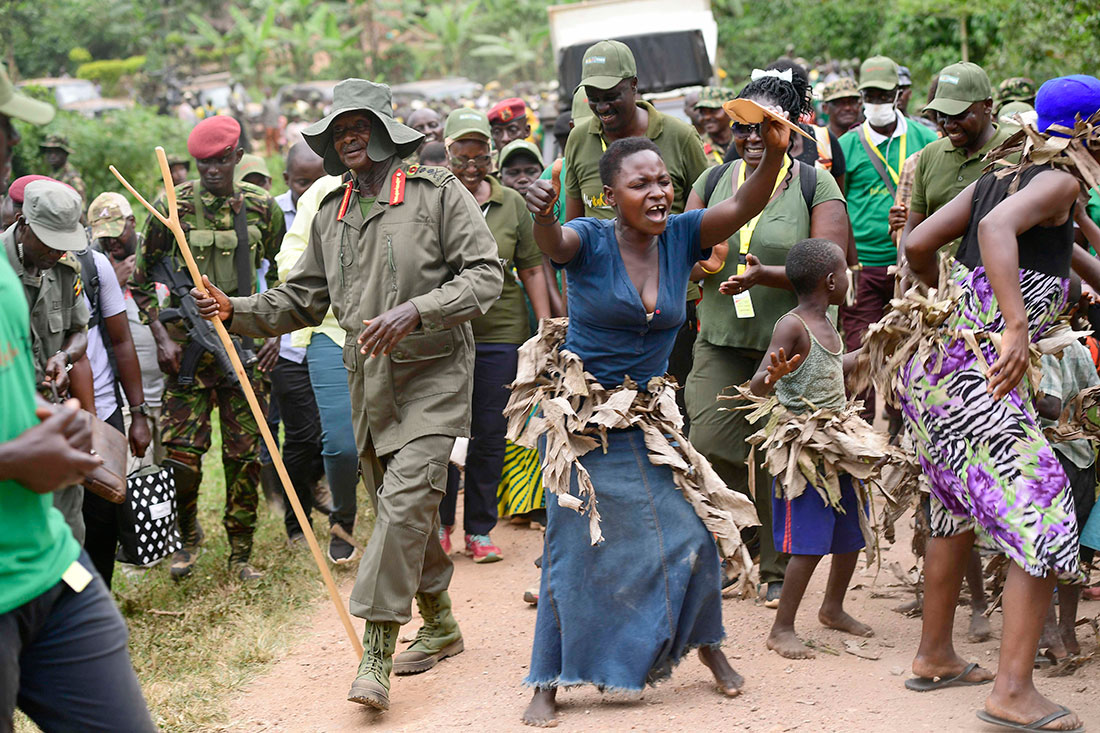 President Museveni during the trek

President Yoweri Museveni embarked on a six-day, 195km-long trek from Galamba in Wakiso district to Birembo in Kakumiro district.

Dubbed the Afrika Kwetu trek, the march was in commemoration of the heroic gun battles that Museveni’s outfit engaged in with the Uganda National Liberation Army (UNLA); the amassment of arms and troops; the coup that led to the end of Obote’s rule; and the eventual capture of Kampala in January of 1986.

The trek has, according to the president’s handlers, covered seven districts in memory of the fighters who took part in the war that brought Museveni and the NRA to State House. This is not the first time that the president has taken part in this trek. There was a similar trek in 1999, and another one earlier on.

It is a laudable feat, one in which younger generations are reminded of the sacrifices our forefathers made to bring about peace, stability, democracy, the rule of law, an end to abject poverty and equality, among others. They also went to the bush to liberate Uganda from dictatorship, corruption, rigged elections, impunity and to stop leaders clinging to power, forever.

It is, however, dishearting that close to 37 years after the ‘original’ Galamba - Birembo march, the area is wallowing in abject poverty, while the president is at ease handing out brown envelopes to women and men of his age, or older, on their knees, with hands stretched out.

These are the same people who bore the brunt of the UNLA in the name of protecting the NRA. Certainly, these are people who were present when the marauding UNLA was aimlessly shelling the area in attempts to eliminate Museveni and his fighters.

Obscene amounts of taxpayers’ money have been spent on this presidential trek, not forgetting the infamous “brown envelopes.” The criteria used for the recipients of these envelopes, is not clear, the amount in the envelopes is an enigma, and how the monies will be accounted for is a joke!

These are disturbing issues that need to be addressed because they determine how best we fight corruption and also respond to some of the questions that were raised in the now rarely mentioned 10-Point-Programme, part of which the Galamba-Birembo trek is commemorating.

While the president is at liberty to give out money to whoever he deems fit, there exists a criterion through which these decisions are arrived at; after all, it is taxpayers’ money he is distributing.

I have been told of one elderly lady who along the trek was given an envelope containing Shs 1 million. This money became the center of concern within the household as the younger members plotted to steal it from her or even do worse. That we can even plot against our elders is disturbing enough, but living in so much poverty that Shs 1 million can destabilize a household to this point is worrying and painful.

It seems to appear that the biggest number of beneficiaries of the brown envelopes were the elderly. But are these the most vulnerable in society? Are they the neediest?

Is a handout of Shs 1 million what they need at this material time? What is this handout going to change in their lives? Is it enough to buy the medicinal and nutritional supplies for a year for just them? What of their dependants who pass off as their present caretakers? Not to mention marking them out as targets in a sea of squalor and despair.

The author is the executive director of the Anti-Corruption Coalition Uganda.

12
+2 #11 ejakait engoraton 2020-01-16 18:47
"In other words Sula, as the"enemy within" the UNLF as Minister of Defense; Mr. M7 and his NRA outfit, were the terrorists in Uganda, who while donning the UNLA uniform, which they had smuggled/stole from the Quarter Guards, terrorized Ugandans and blamed it on Obote (UNLA)."

This is already a known fact, even the sexing up claiming there were 27 guns is a lie, a lot had been spirited and buried, problem the stupid so called liberators had "hidden" them so well they did not remember where they hid, some are still just turning up.

As for using UNLA uniforms, one man met his death because he was able to identify one of the so called UNLA people among the liberators and made the made the mistake of telling it to the bandit leader. He was killed so he would not divulge the details to the others
Report to administrator
-2 #12 Robert Atuhairwe 2020-01-18 16:22
M7 completely continuously consistently assiduously challenges us, the Bazzukulu. Hate him or love him, you can't beat him!
Report to administrator
+1 #13 Zaitun 2020-01-18 17:18
Uganda has gone to dogs, that is all we should say.

Those who believe hard like diamond that Museveni and company went to the bush in the name of the country should look around and see the actual beneficiaries of that infamous war, if they do not belong to the same clan!

Ugandans who thought they were wise to join this group of bandits have either died poor, or are cursing and regreting their acts secretely or are now feeling the pain of being traitors.

It is not wise to betray your only country and then give it foreigners who will be too happy to demean you thereafter.

We have only one alternative left- come together and see them out of State House for good.

This man only intends to buy off people whose relatives were chopped by his troops. He has no shame of the poverty planted in the country, the wide spread corruption, nepotism and tribalism.

There is nothing he can boast of. As a butcher, so he and his froiends will always remain.
Report to administrator
-1 #14 Davis 2020-01-19 14:31
Cissy, you are being very shallow. You are a very big part of the problem in Uganda. You write insincere opinions that have no impact on the situation. You are just earning your NGO salary pretending to be relevant.

You only react to whatever M7 does. You do not have any ideas of your own.

You have nothing to offer except foreign agendas that are nothing to do with our real problems. Please, shut up and go enjoy your 30 pieces of silver, your brown envelope from America.
Report to administrator
-1 #15 Davis 2020-01-20 00:34
It is only a distressed society that can have such a position as 'executive director of anti corruption coalition'.

What has that 'coalition' ever achieved? Nothing. It appears on television and in workshops. Useless workshops. Total rubbish. No impact.

It should be renamed 'the workshop coalition'. It serves to legitimize what it purports to oppose.
Report to administrator
12