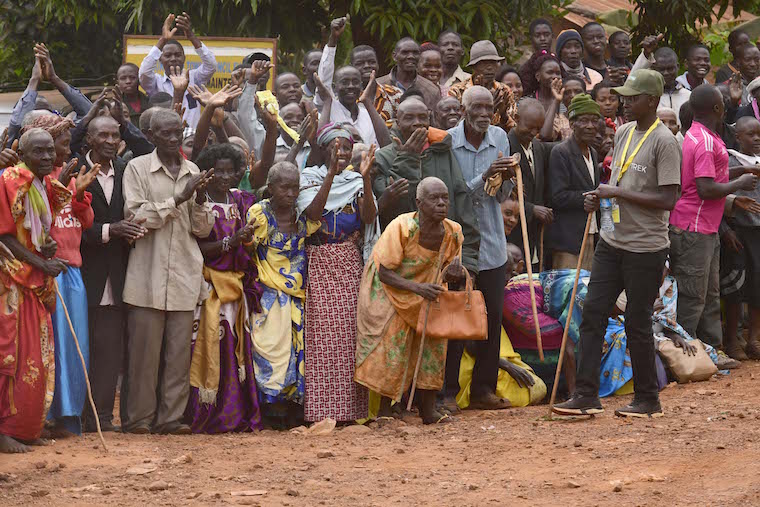 Residents cheering President Museveni during the trek in Kiboga

Since Uganda became a multiparty dispensation, the struggle of parties has seemingly grown.

The sole purpose of transiting from single party politics to multiparty politics was to allow the thriving of healthy democratic competition. By and large, one can say that it is evident that Uganda is a multiparty dispensation if they choose to go by the data. We have more than 29 registered political parties in Uganda, many of which I have never heard of.

If one chooses to go by the data that Uganda has more than 29 political parties, they would quickly pass it for being the most democratic country.

However, given all these political parties, Uganda still runs as a single political dispensation. The NRM has consolidated itself into power for the last 33 years and the multi-party dispensation has seemingly died off.

Ofcourse there are opposition parties that have stood the test of time to challenge the status quo but whether they have been allowed the same opportunity to carry out their activities is another story.

The political parties have breached their own party rubric, suffocated mentorship, witch-hunted others and blackmailed each other to the extent of public disgust. I have noticed a trend by the ruling party to deny citizens services simply because they did not elect an NRM cadre in their area.

The president has continually said on various occasions, and recently during the Great Trek in Nakaseke district, that the voters made a mistake by sending him a useless young man (a honourable member of parliament) and largely blaming citizens for voting opposition leaders and leaders who cannot access him as the sole reason why they are not receiving services. This is unfair and a breach of the social contract.

The citizens elected the government in power, and they finance it with the heavy taxes. Government must, therefore, provide adequate and effective services to all regardless of the political leaning.

Nothing new from Dr Besigye

Recently, the Forum for Democratic Change (FDC) celebrated 15 years of existence of its political activism.

Dr Kizza Besigye’s speech as one of the founders of FDC left many Ugandans in political jeopardy. When he was addressing the congregation at Mandela National stadium, he declared that he would not quit the political scene unless he finishes his political war.

Besigye is a four-time presidential aspirant and the FDC flag bearer seems not to be gratified with his contribution in Uganda’s opposition politics.

For all the 24 years he has been opposing President Museveni, Besigye has failed to get the presidential seat. He has initiated a lot of slogans, demonstrations, and endlessly criticized the NRM government. But all that has flopped. As someone who believes in democracy and fairness, I thought he would have mentored people in FDC who can take over his role or campaigns.

FDC members have always criticized President Museveni for not giving up on his transformation campaigns, saying that he has stayed for long, yet even their own does not want to give a chance to other members to exercise their rights to compete.

It’s unfair for a political party to stay that long when it has only one person using the party card to challenge President Museveni. For Besigye to say that he cannot leave now puts our political development in limbo because he would have been exemplary by stepping down or supporting another candidate like the way his longtime friend Gen Mugisha Muntu did in 2015.

I am very sure that most of the divisions in FDC happen because they do exactly what they criticize in the NRM government.

Civilized people world over have to agree and accept their co-existence mechanism in order to live together in peace and harmony.

That’s why the civilized people of Uganda commissioned the Odoki commission to go around the country to collect the views of Ugandans on how they should be governed in order to avoid a political and constitutional crisis.

To achieve this, a delegates’ conference was promulgated to come up with a final co-existence document called the Constitution, describing how Ugandans desire to be governed through regular free and fair elections.

Unfortunately, what we continue to see is the exact opposite of that spirit. The already compromised 1995 Constitution, which many refused to sign, has continuously been dismembered to satisfy the desire of one man determined to rule Uganda at all cost and maybe also build a dynasty.

This state of affairs has resulted in a haphazard and firefighting approach to dealing with Ugandans’ challenges and problems. This would have been avoidable if our constitution was designed in good spirit and respected by everybody.

Pain of elections in Uganda

Uganda will hold a general election in February 2021. This election requires urgent reforms in our laws before it happens.

An election year in Uganda is usually full of tragedies. The military regime in power has made elections synonymous with brutality, violence, intimidation, torture, hate propaganda and fearmongering such that the average Ugandans sincerely dread the fatigue of these elections.

Mr Museveni does not actually depend on elections and nor does he need one to stay in power. He only uses violent and meaningless elections as a ritual to renew, validate and legitimize his dictatorship.

The potential showdown in a violent election makes many Ugandans disinterested in the politics and leadership of Uganda. Further, utterances from the military, the main constituency of the ruling government, have already pre-determined the 2021 election outcomes.

Ugandans can vie and win elections at every level except the presidency. This position is ring-fenced for Mr Museveni. Somehow, The USA, UK, and EU are satisfied that Uganda is a democracy. This double standard has lowered the passing grade for Uganda so low such that it has eroded the value of human rights and fundamental freedoms as a quid pro quo for their interests in the region.

In the meantime, Museveni’s opponents are not having it easy. They have faced the full brutality of the militarized police. Many are now garrisoned, their businesses disabled, and sources of income placed under strict regime sanctions.

The most respectable thing to do is for opposition to boycott any violent and irregular elections. The first major step is for the opposition to demand comprehensive reforms in the electoral laws.

These reforms should specify the role of the police, the army, and paramilitary groups during these elections. Most importantly, the Electoral Commissioners should comprise representatives from all parties elected to parliament.

When in Uganda's history even when m7 run for position of MP and lost in 1981 was the military and police so involved in campaigns stopping the opposition from free movement.

Tribal leaders MUST stand down & UNITY will block & force Museveni out!

Why don't Ugandans believe they can live without Musevnei & 'what'?, when the demon will be no more as he too, is human?

34 years, Museveni accepts no opposition, yet Ugandans even talk of next election when Mp Bobi Wine needs permission from migrant Museveni to say 'hello' to them, Dr Nyanzi is locked in prison for mocking the demon!

Ugandans will even go for independent tribal states immediately their UNITY throws Museveni out!
Report to administrator
0 #3 Akot 2020-01-14 20:35
MR,

Museveni has reduced Ugandans to NOTHING, look at those poor, badly dressed, but potrayed as 'happy people cheering' Museveni who dosn't even use tax money to give them basic services!

Ugandans should see how French tax payers who ensure social/public services are standing up to Macron demanding more pay to ensure their living & retirement!

What do Ugandans expect from Museveni who has already won next fake election?
Report to administrator