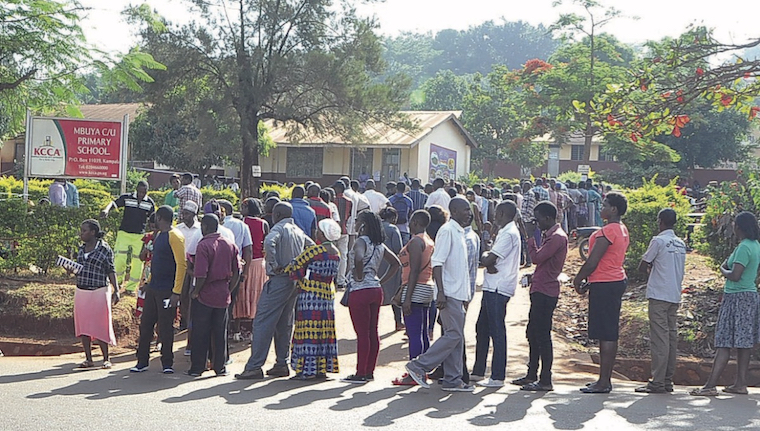 People queuing up for elections

Aspectre haunts every opposition politician seeking to participate in the forthcoming presidential, parliamentary and local government council elections. It is the spectre of automatic disenfranchisement simply by being in prison at a crucial moment of the Electoral Commission’s (EC) 2021 roadmap.

In the run-up to the general elections of 2006, a lot of legal firepower was burnt to afford Dr Kizza Besigye access to the ballot as a voter and candidate for the highest office in the country. Ruhinda MP Dononzio Kahonda and Arua municipality MP Kassiano Wadri won their respective elections by a landslide, and by happenstance, as inmates.

Kyadondo East MP Robert Kyagulanyi, Mityana municipality MP Francis Zaake, Jinja East MP Paul Mwiru, Ntungamo municipality MP Gerald Karuhanga and their numerous co-accused, who are presently battling charges of treason and other public order offences in Gulu High court and in several magistrates’ courts across the country, are not likely to be as lucky as their aforementioned colleagues and comrades.

Since the promulgation of the 1995 Constitution, prisoners in Uganda have been subject to a blanket ban on voting in the presidential, parliamentary and local government elections. This ban, however, is not sanctioned by any law. It is rather effectuated through prejudice and a long tradition of treating all prisoners as outcasts and good-for-nothing second-class citizens.

At Legal Brains Trust, we believe that 25 years of disenfranchisement of prisoners through prejudice is far too long and plainly unjustifiable in a free and democratic society. It violates the basic tenets of our Constitution which accords every citizen of 18 years or above the right to vote.

Parliament has not legislated any restrictions on the prisoner’s right to vote. To the contrary, existing laws compel the EC to empower and encourage the active participation of all citizens in their own governance, and to ensure that all the people of Uganda have access to leadership positions at all levels, subject to the Constitution.

It is for these reasons that Legal Brains Trust has presented a complaint to the EC – which is slated to complete the updating of the voters register today (December 11, 2019) – urging it to cease and desist from the unconstitutional, unlawful and undemocratic practice of disenfranchising eligible prisoners merely through prejudice.

Article 20 of the 1995 Constitution provides that –

(1) Fundamental rights and freedoms of the individual are inherent and not granted by the State.

(2) The rights and freedoms of the individual and groups enshrined in this Chapter shall be respected, upheld and promoted by all organs and agencies of Government and by all persons.

Whereas the right to vote as guaranteed under Articles 38(1) and 59(1) is not absolute, the decided cases from numerous apex national courts and regional human rights tribunals concur that a general, automatic and indiscriminate restriction on the right to vote for prisoners is unacceptable and demonstrably unjustifiable in a free and democratic society.

In 2014 the UN Human Rights Committee, in its concluding observations, reiterated its concern about state-level felon disenfranchisement laws of the United States of America and their disproportionate impact on minorities.

In post-apartheid South Africa, the Constitutional court has twice struck down attempts by the government to deny the vote to convicted criminals in prison.

Clearly, the Ugandan State’s prejudice against prisoners is unjustified and unjustifiable under Article 21(4)(c) and 43 of the Constitution.

A common myth is that all prisoners are lawless and on punishment. “Why should they be allowed to make decisions for the free, law-abiding citizens?”

In the first place, not all prisoners have been tried, convicted and sentenced to serve a custodial punishment for being lawless. Some inmates are in prison on remand awaiting the commencement or completion of their trial.

Meanwhile, the convicts have been sent to prison purposely to undergo rehabilitation and reform in anticipation of reintegration into society as better decision-makers.

No evidence has been advanced or exists to support the proposition that disenfranchisement deters crime. On the other hand, all of the available evidence shows that activities like participating and voting in national elections promote social inclusion, civic engagement and can reduce marginalisation, disadvantage and poverty, all of which are significant causal factors and risk indicators of criminal activity.

Facilitating prisoners to register and vote is therefore likely to promote rehabilitation, integration and participation.

But from a broader human rights perspective, the right to vote is important not only for nationhood and democracy, but also for protecting and promoting the basic dignity of every citizen. Everybody surely counts, and their vote in national elections matters.

The author is chief executive of Legal Brains Trust, a human rights watchdog

The ball is now in the court of E.C and all concerned bodies to ensure this grave Error is corrected.
Report to administrator