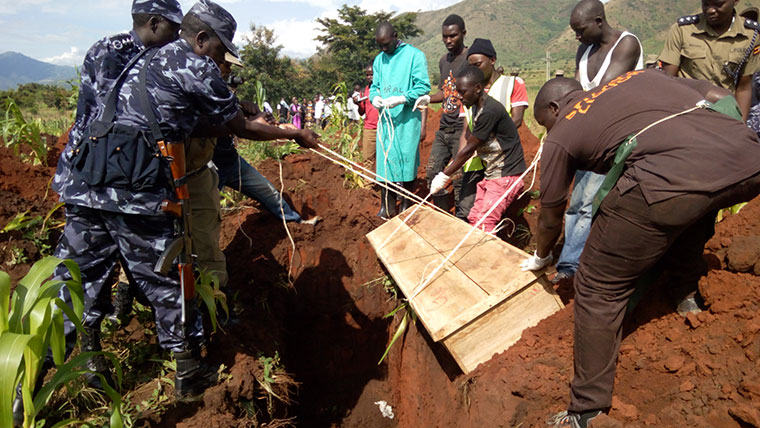 Somalia’s Siad Barre murdered politically active compatriots like it were sport to the extent of carpet bombing an entire town – Hargeisa – in 1988.

In principle, all life-governments from Hosni Mubarak, Mobutu Sese Sseko, Hastings Kamuzu Banda to Muammar Gaddafi murder their opposition to reproduce themselves.

Worth noting here is that whenever the world sees one well-known politician/activist killed, about 50 little-known others have been executed before them. The pursuit of no-change, the ambition to not leave, naturally inspires the ghosts of murder among men and women with power. No life presidents/regimes can survive without murdering opponents.

Let me explain this more theoretically (and quickly get Museveni’s surrogates off the edge): once a man declares life presidency or commits to the pursuit of life presidency through the technocracies of democracy [as has proved common across Africa], they have to murder their opponents as a matter of principle!

Newton’s laws of motion are frighteningly accurate in political science: actions and reactions are equal and opposite.  Reactively, no-change regimes are simply fought as a matter of principle.  For the one who acts fastest takes out the other.

Opponents may be exiled, or locked up for life. But the best option is killing them en masse. Indeed, when a life-presidency stops killing, or fails to kill one talismanic individual, it collapses.

For being in charge of the tools of violence, and controlling the channels of propaganda, life presidents are privileged in their excesses. They kill and explain to no one, and also can bar anyone from attempting to explain or investigate a murder. Or they kill subtly and more technically: as an accident, work of criminal gangs, or a medical mishap.

Let’s deepen this further: most humans prefer being led. The arrogance to lead is limited to a few proud individuals. So, a flock of sheep will follow any other that offers to lead the way without any qualms – even when they are being led into a ditch.

Hence the so-called “herd effect!”  But for every once in a while,  someone is born, or a couple of people are born or emerge from a series of historical-political process with the pride, arrogance and ambition to lead their compatriots under any organised unit. These characters tend to emerge in a newer time with fresh ideas, and newer directions.

Even before advances in technology and science, it is a well-known fact that ideas may not necessarily die, but tend to become obsolete. New ones under newer circumstances are born, and the old hands – for being old – have trouble repackaging themselves.

Against this regime of new phenomena, the new crop of dreamers emerge requiring that the old hands exit the stage. But once the ambition to lead the new world is fully formed, it hits these young dreamers that the sitting government has no intentions of leaving.

This presents them with a difficult reality, to which, incidentally, they are always unready to acquiesce to.  They would have waited for their time to experiment with leading their compatriots. But with a life-presidency already declared, they inevitably find legal and illegal means of taking the challenge. They either die now, or will die trying to upset the old order.

In reaction, a no-change regime also awakens its arsenal of murder weapons: bullets, bombs, criminal gangs, viruses, poison, accidents and several others to deal with these young daredevils.

The no-change regime thus goes on a killing spree. They may murder them in broad daylight as old autocrats did, or more technically and quietly like our new autocrats are doing presently. It is a simple progression of events and all those challenging no-change regimes have to beware of this dynamic.

Content that this is the nature of the matrix, the rest of the country ought to meticulously count the cost. You do not have to have concrete evidence [of say, dead bodies strewn across the streets] to understand that a no-change government would be murdering its opponents. Killing is simply a part of its life.

Or is actually its life.  As an African and Africanist reader, a place where many life-regimes abide, I forever mourn the cost of these regimes.

+1 #1 Lakwena 2019-11-27 09:15
Thanks Yusuf for sounding the clarion loud and clear that: there are organized murderers in our State House, who are ready to murder anybody who crosses their path to absolute power.

In other words, No-change government like the one we have, is beyond reasonable doubt EVIL. E.g., by declaring that he is the MASTER OF VIOLENCE, Mr. M7 has not denied that he is EVIL.

Since independence, the no-change regimes are like rival gangsters fighting over the same territory, in order to establish gang rule.
Report to administrator
0 #2 kabayekka 2019-11-27 17:39
Tell this to the house of representatives of the people of Uganda, that is Parliament or people power house.

Perhaps then they would try to change their method of work.
Report to administrator
+1 #3 Kikomeko 2019-11-28 19:16
Spot on Yusuf..You know Rouge Forces that emerge out of Nowhere claiming to be liberators are Always Deadly..Boko Haram Kills Nigerians of all Beliefs..ISIS Killed even thier Hosts..the Syrians..NRA in Uganda Killed 2.000.000 Ugandans to Cling to Power..Once Hitler said that "If the Germans do not Follow my Ideology, I will Go down with the Whole Country" and he did..Eric Fromm Wrote a book "Anatomy of Human Destuction"..in it you find the likes of M7 and his Killer Brother Rufu(Death) Salim Saleh ready to do what they Know best..Killing..Ugandans either you Stand Up and defend Yourselves or Wait for the Pangas..
Report to administrator
0 #4 Akot 2019-11-30 13:50
Lakwena, thanks.

Museveni is in power & will remain so unless tribal leaders stand down/forced to then UNITY of Ugandans that will;

Whether Ugandans like it or not, they MUST BRING DOWN THE TRIBALISTIC SYSTEM & this comes FIRST! Then & only then there will be a next step without Museveni, as to what kind of govedrnance they want!

Why do Ugandans prefer Museveni, ensure his continuity through the tribalistic system without which, the demon has no land to stand & fight back from?

Why are Ugandans not aware no outsider will say a word against Museveni on how he treats them as long as the tribalistic system stands?

For Ugandans, just bringing down the tribalistic system & their UNITY, is all that is needed to bring an end to Museveni's evil rule!

It's so anguishing, Museveni controls every institution, owns tax money, yet instead of throwing him out, Ugandans help him just go on!

Ugandans are not even aware they have locked themselves with Museveni in the tribalistic system that allows no outsider to blame Museveni!

It's so senseless, Ugandans still believe tribal lands belong to them, when it's not so, especially those with gold, oil, rich agricultural land...!

When will Ugandans wake up & join today world fighting for respect, dignity, just living freely in peace as humans in their countries?

It's second INDEPENDENCE Ugandans need & this is over due!
Report to administrator
0 #6 Akot 2019-11-30 14:19
[Ben Kiwanuka died under inexplicable circumstances under Idi Amin.]

We are a people who never use our past to remind us of what we have to do so as not to get in the same situation over & over!

We have locked ourselves with demon Museveni, in a country formed by our tribal lands, yet the demon has non in it! And all we know is ensuring he alone, rules, destroys us, owns our land riches for life!

Would Museveni, in power since 1986 & assured of continuity, still be on if he was from a tribal land in the zone?

In what state will Museveni leave Ugandans when he finally dies of old age at +90 & how will Ugandans restart, look at one another?
Report to administrator
+2 #7 sula 2019-12-01 10:17
It becomes worse when the so called leaders are even 'foreigners' in the countries they are governing. In short an occupational force like NRA is even more brutal.
Not only Opponets but civilians too.

It becomes worse when the so called leaders are even 'foreigners' in the countries they are governing. In short an occupational force like NRA is even more brutal.

Not only Opponets but civilians too.

What is so disturbing is that it's Ugandans keeping the occupational force (NRA), through the tribalistic system that disempowers Ugandans & lock them with the war mongers!

Ugandans should by now know that as long as they maintain the tribalistic system, thry will get no help from outside!

Ugandans hold the key to their FREEDOM face to the foreign occupation - bringing down the tribalistic system & UNITY or they are alone with the monsters for good!
Report to administrator