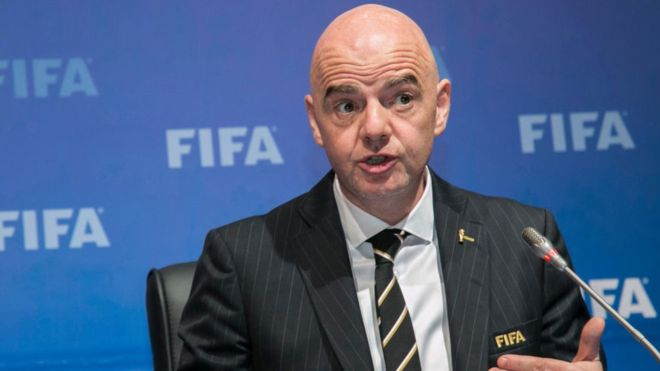 The disgraced Federation of Uganda Football Associations (Fufa) president Moses Magogo is set to triumphantly walk back into office on December 10, 2019 after serving a two months’ FIFA suspension over fraud.

Magogo was found guilty of fraudulently reselling the local quota of FIFA’s 2014 World Cup tickets. He was officially suspended from football activities for two months and fined $10,000.

The minister of Education, Janet Kataaha Museveni has asked the Inspector General of Government (IGG) to investigate the matter and take appropriate action. Now the pro-Magogo forces eager to see him back in office have embarked on a blackmail pursuit.

They claim, if the state intervened and stopped Magogo from resuming his office, the former would have breached the FIFA statute of non-intervention of a third party into the affairs of the football association.

They claim the intervention is likely to result into Uganda being banned by FIFA. Under the non-intervention” or “non-interference” policy, national associations that make up FIFA are required to operate without any “third-party” interference, including government.

A FIFA ban or suspension means Uganda missing out on the world football governing body’s revenue and its sponsored footballing activities, among others. Many are premising their argument on article 19 of FIFA statute.

But article 19(1) states that each member association shall manage its affairs independently and without undue influence from third parties.

Unfortunately, the statute does not define what is “undue.”

But according to some authorities, undue influence involves one person or entity taking advantage of a position of power over another person.

Surely, the minister’s intervention, which is aimed at ridding Fufa of a person who has failed the fit and proper test, cannot be characterized as undue influence! FIFA cannot use statutes to blackmail Uganda.

The improper motive embedded in this statute cannot oust the authority of our domestic laws in fighting corruption. Corruption is a crime and Magogo cannot benefit from a crime to steer the affairs of Fufa.

The autonomy of the soccer federation was entrenched in the FIFA statutes for proper motives such as protecting them from government influences and control for good reasons such as avoiding corruption.

It was later abused by the FIFA regime headed by Sepp Blatter when it turned the law into a shield to protect the cronies and supporters from prosecution or removal from office.

Unfortunately, because for a long time FIFA’s non-interference rule has not been challenged in any court, the crooks have taken it as a rule etched in stone. Zimbabwean sociologist Manase Kudzai Chiweshe summed up the real intent of this policy:

After the 2015 corruption in which some of its leaders were implicated in the corruption scandal, FIFA needs to redeem its image by revising its policy.

And Magogo’s case could be one test ground for FIFA’s zero tolerance for corruption. Fufa received public funds, and Magogo has proved his fingers can no longer be trusted to touch that money.