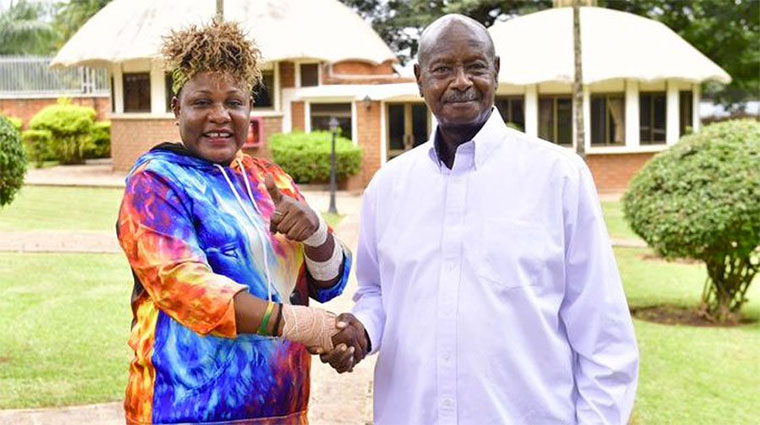 Our president has a prerogative to render financial help from his well-nourished State House budget on donations; however, it is concerning that the boundaries of this prerogative might be going beyond the limits of the cosmos.

And it doesn’t really matter whether it is the people chasing the presidency for handshakes or vice versa. The effect is the same since the devil is always in the detail. Without inquiring into the legal structure or absence thereof, criteria and good intentions of the handshakes, I want to think that the giving and receiving of these cash handouts will only deliver unintended negative consequences to the country.

Uganda is already burdened by a very high age dependency ratio which at 96% is ranked seventh in the world by the World Bank as of 2018. The high age dependency means that the Ugandan working class has to live through a life of struggle where they scrounge to barely meet their needs with most ending up with no saving for their old age.

It also means that Ugandan industry and businesses have to suffer low labour productivity because of the negative conditioning of mindsets which continue to feed on the chronic dependency syndrome in the country.

So, when the president comes to town with his money bags, people in positions of responsibility in the private sector have nowhere to hide because the cash handouts are sending a wrong signal to our youthful and unemployed population to believe that it is permissible to expect, receive and survive on cash handouts in the real world.

In my view, presidential handshakes and the other variety of handshakes that I have mentioned above can only serve to exacerbate our economic challenges. Some people may come up in defence of the presidential handshakes and claim that they can benefit recipients engaged in gainful economic activity. This may be possible but it should not be taken for granted that success is automatically assured with an injection of this kind of free money.

You don’t need to be a genius to have encountered the irony of people who tend to act irrationally when they are gifted with free money, even when it is for business. In reality, they may not care well enough for the money in the business and lose it to consumptive behaviour since they did not labour to get it and are not obliged to pay back.

That is why no country has ever developed with free money or aid. Religious leaders receive donations from believers and regular offertory from the faithfuls, not for free but for a service they offer.  Their service is specific and measurable on a spiritual scale and it does not frolic anywhere near the negative consequences of cash handouts.

Moreover many institutionalized religions work up the money they receive by investing it in productive economic ventures to regenerate it. This should make the case for more well-structured investment in the key areas of the economy and less cash handouts.

Presidential handshakes just undermine the impetus of the people to work hard and fend for themselves especially when the handshakes are packaged to look like a business promotion. These cash handouts are not a human right whose protection is guaranteed by the Constitution.

Therefore, the president or any other persons who find themselves in this fox hole have no legal obligation to continue with this frenzy except for the venerable causes which should benefit under a framework governed by proper policy.

Whereas presidential handshakes do not kill people, they actually teach them nothing about how to live in the real world where every legitimate penny earned requires sweat and untiring effort.

Ultimately, the recipients of the cash handouts suffer the most because when the cash runs out as it often does, they have to return to a hard life with worse coping abilities. So, people are advised not to chase the president looking for cash handouts because this may rob them of a productive and creative life.

Presidential handshakes should not make a serious feature in any presidential repertoire. They, therefore, do not merit further discussion lest we glorify them instead. What requires further discussion and glorification is the need for the presidency to find other constitutional means of endearing itself to the political support base in ways that do not hurt us in the long run.

H.E. Super Glue refused to be photographed with "Miss Uganda" ( again) untill she took off that "indian hair" She did

In fact , it is now a well known fact that no woman can work with Museveni uless they have a hair cut that looks like that of his wife and his daughters.

There is proof that this is the case.

Damned be Bobi Wine Power , Musanvu is now pressured to hang out with a porn-mouthed bitch with horse-hair on top of a shaven brick . The new catch looks like those multi-coloured parots from the Amazon, which explains her endless bellowing

Churches, funerals, kankwanzis, the list goes on; I have even seen an airport worker kneel in front of a tourist, for what, eh?

Unless we go back to basics, take our hoes and go back to our 'shamba' we will remain beggars forever.
Report to administrator
0 #4 Lakwena 2019-11-26 18:55
In other words, for the purpose of austerity; can Mr. M7 recruit Mr. Fred Muwema as one of his many advisers?

Otherwise, thanks Counsel Fred Muwema for the well thought out and written caution. But I am afraid many of the presidential handshake beneficiaries will resent you trying to rock the boat or derail the freebies and gravy train.

Similarly Mr. M7 may detest your wise counsel and caution.

In other words, you are trying to embarrass him, for being a spendthrift and reckless president.
Report to administrator
0 #5 Lakwena 2019-11-26 19:09
By the look of things Mr. M7 is now like a deadly contagious disease. Whoever gets into contact with him begins to look, think, lie and behave like him.

E.g., because of lying, Mr. Ofwono Opondo now looks like Mr. M7. Before his dropped like a hot potato former VP Gilbert Bukenya was stupefied aping Mr. M7 mannerism, among others, stammering like a he goat on heat.
Report to administrator
0 #6 Akot 2019-11-26 19:37
rubangakene, agreed, but,

Why be beggers in a country that is yours, fromed by your tribal lands in which Museveni has non?

How many Ugandans are getting back their stolen money?
Report to administrator
0 #8 Mubiru 2019-11-26 20:14
The recipients the writer blames are not guilty to use a simple legal term.

When you start fire and goes out of control, the arsonist (read Museveni) is the one responsible and not the bush (read recipients) which is ablaze. And above all where does Museveni get all this money ?

If it was his he could never afford to give it away like confetti. Other Presidents can't do that because unlike in Uganda where the public is spineless due to intimidation and blackmail etc the public in those countries demand answers for wasting their money and failure to do so could result in their removal.

In Uganda even asking the almighty President a simple question, it is easily misinterpreted as "treason" with horrible consequence. The writer must be aware that the so called educated class- police, lawyers and the judicial fraternity receive the same handouts but call them "facilitatations"not from Museveni but the down trodden poor of Uganda who desperately need their services.
Report to administrator
0 #9 Lysol 2019-11-26 22:12
They say if you don't feed your dog it will always chase or follow you around until you feed it.

Museveni got himself into a trap by always dishing out taxpayer's money to win love and votes. Now he cannot get out of it.

No one will be loyalty to him without being bribed. Museveni came from the bush very poor hre had no cash even a farm, So Ugandans have the rights to get what it's rightfully theirs. Always get the money and run. Nobody owes M7 nothing!
Report to administrator
+1 #10 Wainaichi 2019-11-27 00:30
It's a pity the author of this article failed to disclose how much money foreigners give to Ugandans for their services be it political, intelligence, subversion,propaganda etc.

I bet the amounts are in millions if not billions dollars over the years.

And you object if good and people's president Miseveni hands out dozens of thousands shollings.

Do we have any good in Uganda from foreign cash outs.? Yeah,we have lots of problems whereby the government has bee sabotaged.You want another rock? Yes Ssebo!
Report to administrator