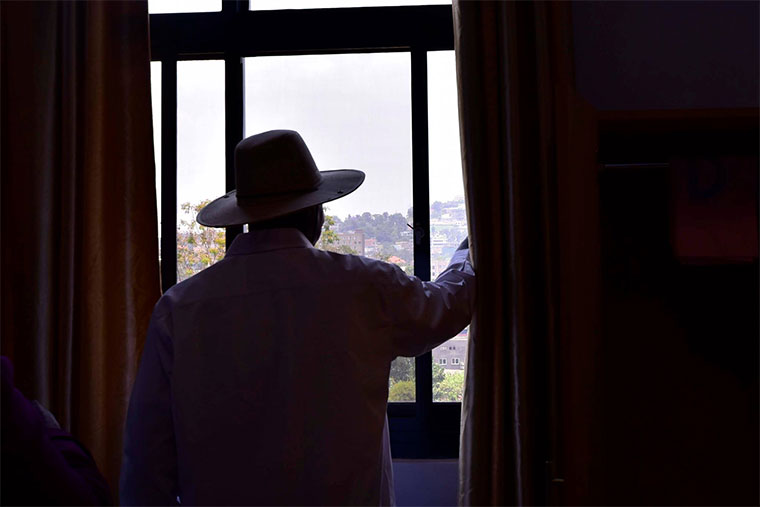 President Museveni looking through the window at State House

Last week I wrote about a couple of things we shall have to do in picking up our rags from wherever Mr Museveni’s rule will have left us in what now appears to be a curve of diminishing returns. Certainly, for anyone keen, that point is not very far from now.

My fear is that because of all that is happening in Uganda today, and our presidentialist system, we have put a lot of attention on Museveni’s exit so much so that we haven’t had time to reflect on Uganda after him.

We might suddenly get shocked when he is gone and say to ourselves: ‘he is gone, is that it?’ And his worst undoing is that, in doing all he boasts to have achieved, he doesn’t seem to be bothered about sustainability after him – let alone not being bothered about the corrosion of political integrity down to the smallest administrative unit.

Nevertheless, the idea here is that, when that time comes when he is just but a topic in history, we should not get lost in excitement only to find ourselves treading down the same road that is paved by putting too much trust in the goodwill of a ‘liberator’.

Uganda has had enough lessons in history on not putting trust in individuals, and it is up to us what we learn. If we ignore them, it will be a cycle of joy and tears.

Whoever it is you have in mind; be it Gen Muntu, Hon Mao, Dr Besigye, or Hon Kyagulanyi, from our experience, there is absolutely no guarantee that they will hold onto what they are or promise now if they are not controlled by checks beyond their power to bend. Bitten by a snake before, it makes perfect existential sense to be scared of a rope, until you are sure it’s just a rope.

In a way, Museveni is a victim of the high hopes people had in him, just as the hopes in whoever comes in might be after this long wait.

Museveni has had all the benefit of time to prove what he promised; but at a certain point, and naturally so, the more time he has added, the more he has dented his legacy. In reverse of Jesus’ statement, it is like Museveni had said to himself that ‘I can build this temple and break it down’.

But, on a good note, we have also learnt that most new presidents (pre)tend to be pro-masses and are more eager to be popular in their first few years in office. Even Amin was, before he became terribly paranoid. The entry period is the time we should use to tighten up systems, such that if power is to later get to the new president’s head, the country doesn’t just helplessly cry betrayal.

Reading the preamble and the provisions of the 1995 Constitution (before amendments), one notices that it was informed by Uganda’s history. Attempts were made to fill some of the loopholes that had put Uganda in its past challenges.

One of the vivid measures was to ensure that no president would overstay in office as to make the country desperate again. That if the advantages of incumbency made it difficult to remove a sitting president, at least the country knew that term limits or age limit will catch up with him/her.

But while putting all these in place, so much was tragically assumed about the goodwill of Mr Museveni at the time. Perhaps, it is because we had never imagined the possibility of a choir parliament that would become the president’s tail. A lot was assumed about the quality of members of parliament Uganda would have, partly basing on the high calibre of the Constituent Assembly.

Now that we know that any ‘liberator’ can gradually end up in the belly of power as a stranger to their old self and that parliament can be diluted like a poor man’s alcohol, one of our fundamental tasks will be to fix these gaping holes.

The challenge with not sorting these elements of government first is that they will cripple everything else. Separation of powers, which is a crucial aspect for accountability in governance, will be impossible – thus extending breakdown to social service systems.

But, given that all the above changes will depend on the quality of the parliament in place, how shall we improve that House?

Considering that we may not be able to reasonably tidy up parliament in the immediate, the first post-Museveni parliament will (should) work under concerted public pressure for the above changes. Promisingly, no post-Museveni president is likely to have as much historical privilege and capacity to camouflage as mystical. Public fear is likely to be less, and civic agitation higher.

Nevertheless, in the nearest possible, we shall have to sanitise parliament by raising the bar again and trimming down its numerical obesity. This might take some time because, even though education levels matter a lot, the problem is not mostly about that.

Many terrible disappointments in that House hold a first degree and above. Degrees do not necessarily breed integrity, which is a big part of our problem.

Neither can we blame it on the voters for electing lukewarm MPs. With a few exceptions, the monetarisation of our politics, championed by NRM, and the loss of trust in parliament has led many voters to say that ‘any person we vote is as good as the other’.

So, we give another a turn to eat, or the highest bidder takes the vote. How shall we rehabilitate all this mess if the same actors are in the house to cushion themselves?

(To be continued next week).

Live your life happily reading children's books. They are many. And I know you would really love them.

Slowly you will grow to understand higher things and learn how to reason. If you have children, let them teach you slowly.

I don't usually comment here, all the years I have checked here and found something from you, it is a stupid childish attack on writers and not their ideas. You make this lovely space stink
Report to administrator
+4 #12 joe 2019-11-24 08:31
Museveni and the past leaders mentioned have never had a legacy. Look their backgrounds!

When electing leaders we need to do thorough background check including education history, criminal records name it.

And any leader found guilty of having committed any of the offences is liable to 20 years imprisonment. I agree with all ideas and parliament should be reduced to regions, govt needs employees on grassroots most
Report to administrator
-1 #13 Lysol 2019-11-25 01:54
To one Moses
Hope you were not that Moses who used to post his bogus articles here. It seems the Americans kicked you out because of that.

To get a visa now they read your social media for the last 5 years. May be not. Sometimes it's fun to play with little minds like yours and many other here, Spire likes or may be enjoys when I criticize him, I bring many traffic/readers to his column that why he keeps quit.

One another note if he responds, we will shut him up like that one Moses. The wishy-washy The Monitor is hiring Go look for a job there. Do you now what Ad Hominem, FOOL?
Report to administrator
-1 #14 Lysol 2019-11-25 02:02
To Deng
Enjoy reading your children books to your kids at bed time, There is a thin line between love and hate.

What ones hates is someone's food. It all depends on the defination, like many things in life. South Sudan needs many English teachers, why not go and teach?
Report to administrator
-2 #15 Deng 2019-11-26 02:03
Lysol, you are not creating any sensible traffic here.

You are just wasting space with your childish rants which show a low self-esteem and primitive hatred without ideas.

Go and watch Tom and Jerry. This is a place for serious ideas, not your petty buffoonery. Grow up, Stone Age lumpen
Report to administrator
+3 #16 sula 2019-11-26 14:39
1- Those who were old enough will remember that when Musevni /NRA started their bush war they were classified as bandits by the then govt of M. Obote.,that is of the category of Boka Haram or Al shabab of today.

2- 33 years in power ,what they have done to this country proves they were bandits and remained bandits to the present day.

3- Re -building the country after such bandits have devoured and torn it to pieces wont be an easy task.
Report to administrator
-1 #17 Lysol 2019-11-26 21:42
To Deng
if you're not full of hatred the people of the S.S would not be fighting each others right now Go back and preach peace there; dark skin.

Uganda will take care of it's own business including the corrupt regime.
Report to administrator
-1 #18 Lysol 2019-11-26 21:48
To that Lose and a quitter Moses
You cannot handle the social media.

Next time don't try to attack me again. It seems you don't understand the social media.

Nothing has to make sense all the time. It's very easy to screw the minds of some of you people and I sometime enjoy it. Having fun. Don't give a damn if Spire quits like you did.
Report to administrator
0 #19 kirya 2019-11-28 00:51
Send m7 to the ghetto of south central and the wife confine her to prison for the rest of her useless life.
Make m7 sing people power over and over.
Report to administrator
12