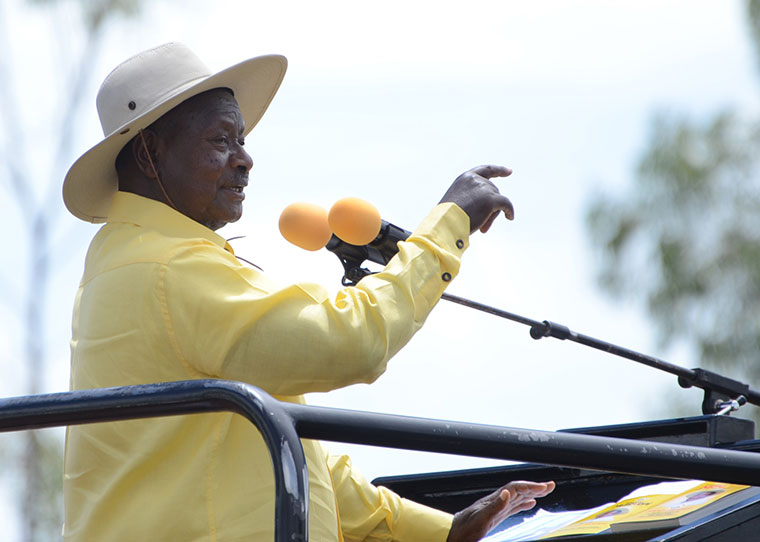 A colleague of mine has a small piece of writing pinned on a board beside his chair; it reads: PICK UP YOUR PIECES AND MOVE ON.

I have never asked what made him pick on that particular one. But recently, while I reflected on what is happening in Uganda today, it came back – especially on the question of where we shall have to start from to rebuild the country from the pieces that will be left when Mr Museveni leaves power.

Currently, there are many Ugandans resigned to their dread and almost convinced against nature and history that Museveni is here to stay forever. And this is understandable in our circumstances where many state institutions appear to be acting for his perpetuity; where dissent and freedom of association are increasingly criminalised.

There is no sign that things can get any better under him, even if he so wished now. First of all, as a leader gets older and biologically weaker, there are often people around him that take advantage by usurping every little power that he cedes.

This is why ‘Mafia’ talk is big now, especially within the system itself. I believe there are things done on the president’s behalf and he also gets shocked to learn about them; yet he cannot garner his powers of old to micromanage government.

He created a system that runs around him; so, what happens when he no longer has the energy to superintend everything?

Power brokers set it. But there will most likely be internal rivalries, as there will be many competing sub-power centers positioning themselves for power crumbs and the main center. In Robert Mugabe’s Zimbabwe, we saw the emergence of his wife Grace.

As Malawi’s Kamuzu Banda grew senile, his ‘hostess’ Cecilia Kadzamira ruled in the background. For Fidel Castro, it was his brother Raul Castro.

Under such an environment, you don’t expect much in terms of social service; for there will be so much internal mutual sabotage and frustration – and the president focuses more on watching his back. Meanwhile, trust in government continues to decline, such that even if government initiates something on good purpose, it is met with cynicism. Where a relationship has soured, a partner may bring flowers home, only to be beaten for doing that.

Well, ultimately, whereas we may not know when or how, it’s no prophecy that Museveni’s rule will end. Even if all Ugandans were thwarted into silence, nature will speak – and it doesn’t mince words. But because nature may send no warning before it pulls the curtains, it is a terrible thing for a country to rely on.

Anything can happen in the anxiety that ensues, especially by the rivalling camps when no center holds anymore. In the hope that Uganda shall not be terribly damaged in transition, the spasms of which government has suffocated, we should not miss the lessons on how we got here. Let us count these decades as a long lecture on what works and what doesn’t, and then go back to the drawing board in the next era.

It is not easy to summarise the core of all that has gone wrong in our leadership, and what its effects on society are. But certainly, there has been a tragic breakdown in accountability and consequently a gradual decline in political ethos even among the electorate.

The politics of eating, patronage, tribalism and cronyism has eaten into our society to levels that may take ages to fix after Museveni.

The response to ghetto pressure by throwing around money and car keys is a more recent example. One of the first things we shall need to fix are the powers vested in the presidency. We have had enough lessons that we put too much in the hands of the president; and by the time we realised the dangers, he had already held all too tightly as to release any. C

harles Caleb Holton cautioned as far back as the 19th century that “no man is wise enough, nor good enough to be entrusted with unlimited power”. The philosopher Edmund Burke adds that “the greater the power, the more dangerous the abuse”.

It is for this reason that we could only scream like helpless children all the times when the Constitution was changed to serve him. It is not simply because NRM had the majority in parliament, many voted the way they did under pressure. It took extraordinary virtue for some to resist.

This is also the reason why we watch the president give out cars, money and other political incentives in an arbitrary manner devoid of systematic planning, yet we cannot put him to task to account. We can shout ourselves hoarse, but election reforms that do not favour him will rot in their cabinets.

In an obvious conflict of interest, the president’s hand is clearly in the judiciary, the Electoral Commission, the police, parliament, and all over. This complicates the relationship between him and the officers in those organs, ultimately crippling accountability.

Consider the president’s appointing power too; both the power to appoint, and who he can appoint. It has been argued by some people that it is okay for the president to directly appoint his relatives/ family members as long as they qualify for a job.

The idea is that they are citizens too. This is correct, but it oversimplifies the matter. If for instance I was working under the president’s son, wife, or in-law in a public office, it creates an awkward setting that disables me from demanding for accountability from them.

It also becomes difficult for the president to publicly (say in Cabinet) call them to order when they are at fault. Yet if he appears only to be blaming others, that still creates unease and intrigue. It easily breeds incompetency and impunity.

To be continued next week.

What a pitty; Ugandans are the last to know they alone can set themselves FREE from these bandits & only by bringing down the tribalistic system first & above all then UNITY, thus leaving Museveni LANDLESS, WITHOUT ARMY/POLICE/PARLIAMENT in his control!

When will Ugandans join today world to make their stand for change, in UNITY?
Report to administrator
0 #24 Akot 2019-11-15 15:07
Quoting Decimon Wandera:

We should shift the debate from The personality of the president and focus on the kind of Uganda we want to have.

We should be talking about the healthcare, education, democracy, transport, technology, agriculture, investment and trade, and land systems we want.

Singing a song louder does not change its meaning. We all contend that politics has gone bad, democracy has staled in this country but above all, there is a huge leadership deficit across all institutions our families inclusive.

we should be prioritizing unity of all Ugandans.

Without UNITY, Museveni is going no where as he is maintainede through the divisive tribalistic system that disempowers Ugandans completely!

Ugandans MUST throw Museveni out in UNITY, then go for the kind of governance they want!
Report to administrator
0 #25 Akot 2019-11-15 15:13
Decimon Wandera, thanks.

All comes to UNITY for common purpose, just as you put it!

Ugandans MUST understand they MUST bring down the tribalistic system & this will protect them as Museveni won't use them against one another!

Ugandans MUST know that as long as they are alright with the tribalistic system, they are protecting Museveni & no outsider will ever say a word against him nor how he treats them!

All what you say can be put in palce the moment UNITY throws Museveni out!

When will Ugandans understand they alone, have the power to make their stand face to Museveni & make the country formed by their tribal lands, what they want?
Report to administrator
+6 #27 Lysol 2019-11-15 21:51
1. Dismantle the many tribal militias
2. Form a transitional government
3. Write a new constitution.

4. Arrest the corrupt officials, including M7 himself
5. Rewrite many investment contracts, especially
with the Chinese.

6. Reinvestigate all the many wars crimes especially
with one Kony. and other human right abuses.
7. Freeze all the assets of the corrupt regime both
inside and abroad.

8 Review the land and oil contracts and other
natural resources
9. Remove our forces from the so-called
peacekeeping missions and dissolve the UPDF
and the current brutal police force

Ugandans MUST work towards "bringing down the tribalistic system" first & above all, if they want Museveni OUT & a future in the kind of Uganda they want!

The tribalistic system MUST be brought down before Museveni dies sooner or later!

By now, Ugandans surely know that unles they ACT in UNITY, Museveni is there for life, then WHAT when he will be no more?

Will Ugandans go for independent tribal states, then?

Even when Museveni will be no more, USA/Europe will continue in SILENCE, waiting for Ugandans to put in place a governance they will either REGOGNISE or NOT!

The moment Amin was thrown out & the National Executive Consultative Council was put in place immediately & USA/Europe regocnised it as a body Ugandans accepted to lead them to the next step, right?
Report to administrator
123