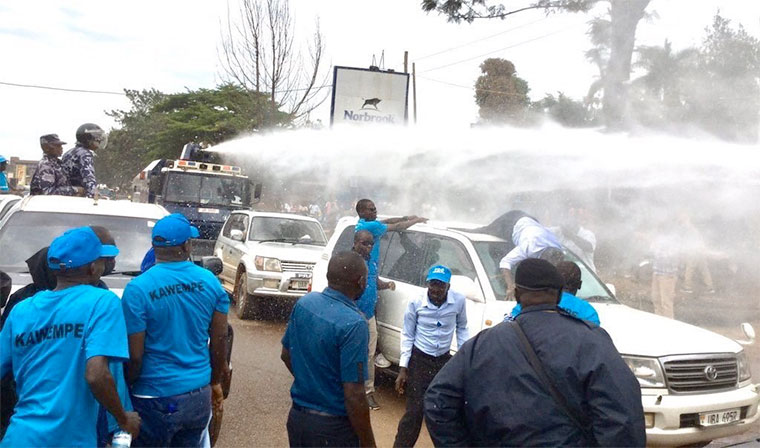 The rains of November 4 2019 should have turned into a flood, but the seven witches on Kampala’s seven hills held their ground. I was out to play in the rains, as I waited for the floods.  I wanted the river banks broken so as the fish would come floating.  But they didn’t come.  Maybe another day.

Watching the news in the evening, the stories I picked by the fireside were ringing loud in my ears.  Stories about witches and rains. [By the way, mine is an actual fireside pitch, not some fictitious rhetoricism. Often after a group shower of about three lads with a single basin – which was a lot of fun – we dried our little frames by the fireside.

Squatting, the water dripping off our bodies flowed over our bellies finishing at the sharp end of our shrivelled penises. Dripping into the ashes under our feet, it looked like one had urinated in the ash. If my mother was not telling stories, knitting her kyaki mats, she was hard at work mingling maize flour].  But I digress.  It appears I am in the mood for stories today – and I will let them fly.

Rain-witches happen to be the most fearsome of witches among traditional communities. But tradition has a defiant saying that those rains that surprise the rain-witch, cannot be stopped. I recall my mother telling us about the complicated art of bewitching rain, and how some men and women were really accomplished at it. But the surprise rains, my mother continued, were often unstoppable.

They disguised their intentions. The clouds would look white and calm, and the rains sometimes fell amidst a bright sunny afternoon.  What started as a drizzle, soon turned into an unstoppable downpour.

While the seeds in the ground prepared to sprout, emerging from a long spell of darkness, the residence of the witches could be swept away. If the storm became strong enough, thunder would strike the witch, killing them in the process. If not dead, the embarrassment prompted them to emigrate to another village.

November 4: It has been raining on end, but it did not rain that day.  Kampala instead witnessed three ironically simultaneous but clearly unorganised, unconnected and uncoordinated processions.

As is natural, they ended in running battles with the police, and as is natural still, police ended victorious, suppressing all of them.

(a) In one corner, Makerere University students continued their activism against tuition increment. Although this was a mild extension of the earlier two weeks of protests, it was still headline news.

(b) In another corner, journalists, for being brutalised while reporting the Makerere protests (and others before), had a procession to meet the Inspector General of Police to express their discontent. Again, they were stopped by police, arrested and beaten up before being allowed to meet the amiable but misplaced officer, Afande Asan Kasingye.

(c) In the other corner, FDC’s Kizza Besigye and co. had their procession from Namboole stadium to their headquarters in Najjanankumbi stopped, water-gassed, teargassed and arrested.  These showers should have turned into a flood.

Despite being successfully contained, these campaigns make three things visible: Firstly, there is mass discontent across Uganda, and the country is surely seated on a nasty ticking clock. To use the imagery of the rains, heavy nimbus clouds have already formed and the shrieks and shouts from the gods of heaven are getting louder by the day.

But the rain-witch still has his magic portions in the right concoctions. This discontent was also recently visible over rent increment in Kampala’s malls, but also when traders under KACITA protested Chinese/Indian vendor-investors scattered across Kampala like mongrels. Bobi Wine cannot sing. I could not imagine all these rainmakers having their rain rituals on the same day.

Secondly, these stories confirmed again that protests were a valid language of politico-social negotiation in our time – in addition to guns and money. See, the journalists successfully delivered their message, although to a lower office (but Afande Okoth Ochola is also simply toothless under the circumstances).

Journalists were also able to make a proud statement of their resilience – although as usual, the owners of capital were in hiding. On their part, Makerere University students have had their fees eased, and also met the speaker of parliament. Another surely useless feat, but its symbolic significance was achieved.

Thirdly, that the future lies in un-organised, uncoordinated protests. The absence of coordination is November 4’s strength. To return to the imagery of the rains, these protests-processions were like the unsophisticated drizzle which ought to have turned into a flood, which washed away the hut of the rain-witch.  But I will add quickly, that the rain-witch remains a potent one, and his medicine-men and women surely work. But the centre is getting shaky every passing day.

It will be a big mistake for Museveni to assassinate Besigye. Unless he is stupid and desperate.
Report to administrator
0 #2 Lysol 2019-11-11 00:54
I posted my comment here a few days ago , but for some reason the Observer has not posted here.

It seems the Observer is trying to deny me the civil rights of expression. I will have to go the legal way,(against the Observer) since this is a public forum.
Report to administrator