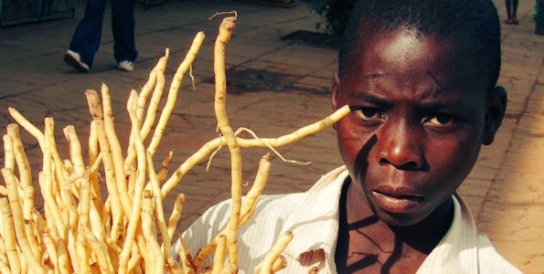 An elderly friend of mine recently lamented about the surge in the sale of male-sex boosters.

“They are everywhere,” he started mournfully. “Local radio stations and other vernacular-speaking media are overflowing with adverts for aphrodisiacs.  The classified sections of newspapers are full of adverts for herbs and powders that enhance sexual activity. Kampala streets are flooding with men hawking mulondo, and kukumanga.”

And it seems they have good business. Have Kampalans become so fragile that they need external enhancement for their sexual activity?  If so, what a country of sexually weak men! Doesn’t this weakness translate into political weakness? We collectively laughed out at the thought of this idea.

This conversation had started after, in a distance of just about one kilometre down one dusty suburb of Kampala, we had met three hawkers laden with roots chanting their liberating powers.

In the process, we historicised aphrodisiacs in ways that revealed a close connection between the condition of the economy and sexual activity – hitting men hardest. The long and short was that a broke man needs sexual enhancers to last the night.

This friend of mine [I will call David Ddumba] – probably in his early sixties – looking back in obvious sweet nostalgia, noted that while sexual enhancers have been around for a long time, they had been reserved for much older folks.

“Young men were self-powered; they ran hard and lasted the mile,” he cheekily remarked. Diets and exercise routines were not convincing explanations, Ddumba argued.

“Back in the days, we dieted and exercised just the same way, but our coffee-cotton-and-maize-powered wallets kept us sexually strong and satisfying. The present sexual malfunctions are a function of the economy”.

As the conversation heat up, Ddumba offered to deepen and de-generalise his treatise on the connection between the economy and male sexual prowess.

“You see, poverty is felt more in the urban area where people subsist either on petty trade, offering manual labour or theft.  Urbanites tend to feel the pinch of poverty more directly and presently, many Kampalans go without cash for extended periods. On the other hand, in the countryside, where subsistence is more agrarian, the term poverty applies to a limited extent. Going without cash for a country-dweller does not [or never used to] disturb one’s mental calmness suitable for sustainable lovemaking.”

Ddumba continued that, however, even villagers are starting to experience a reduction in sexual prowess for rural poverty is on the rise.  Villagers used to extract some income from the sale of their surplus produce but the poverty of their urban-buyers is starting to affect them too.

The chains of trade which hitherto sustained their livelihoods are fast disappearing. When urban buyers come, they bargain for price reduction with the ferocity of a witch.

It is a trite but true observation that there exists a connection between the economy and the sexual prowess of men.  [I am not sure about the same in women – for generally, there are fewer women heads of families. On the other hand, in many cases of female breadwinners, the men are simply absent, rendering the sex-equation incomplete].

Commenting on this condition, Bobi Wine’s song, Mr Money has a chorus, which captures this state of affairs more succinctly: “If you have no money, life comes to a standstill/ You never feel yourself/ Even in your homestead, you are half a man/ If you don’t have money, you are shunned by even your friends…”

These lines speak to a male breadwinner struggling to assert himself on an empty wallet. The song generally speaks to the violence that money – and the lack of it – wreaks onto hitherto cherished positions. I have listened to a street-remake of the chorus, and the meaning is even more vivid here: “If you have no money, you cannot even get an erection.” This fact does not need more evidence to prove it – as the surge in the sale of aphrodisiacs so clearly demonstrates.

We would be right to conclude that as Kampala undergoes a mass erectile decline – which is a function of a terrible economy – a vibrant economy of mondia whitei, pomegranate and other aphrodisiacs is thriving. Sadly, however, this new mulondo-kukumanga economy is akin to one of coffin-makers and grave-diggers: it thrives on pain.

I get your point ; but I do think that in Ugand`s case , the opposite is true.

The argument that lack of money weakens a man`s appetite for sex directly conflicts with a finding that sex is a stress reducer - that sex is a stress management technique; which explains why poor societies angage in sex activity more than developed/rich ones.
Report to administrator
-1 #2 WADADA roger 2019-10-02 20:32
The writer of this article is looking for solutions to his personal problem in bed. If Mulondo and kukumanga have failed, try jesus.
Report to administrator
0 #3 Willy 2019-10-02 20:57
About 20 years ago, the president of one West African country died in action because of taking an overdose of Viagra.

If mulondo and kukumanga were available to him, he would still be alive.
Report to administrator
0 #4 Opolot 2019-10-03 12:24
If you think financial well being improves sexual performance, try the rich.

You might be shocked. The stress and lifestyle diseases that often come with wealth could affect sexual performance worse than poverty stress would.
Report to administrator
0 #5 Ark 2019-10-05 17:36
Peace of the Mind drives good sex. The rich with loans in the neck (Bakuba kamu kagigagga then they fall aside).

The broke are worried of insults from the wife, the cries of the kid.its hard for them to even erect at times .
Report to administrator