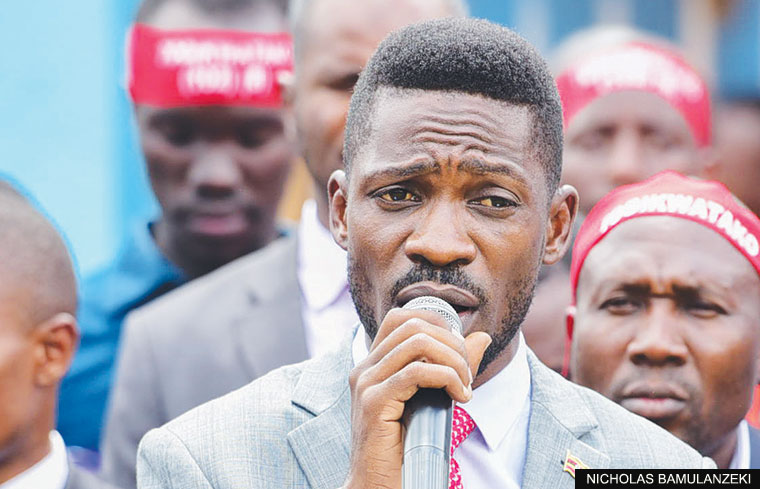 If there is any lesson that we can learn from President Donald Trump’s rise to the helm of American leadership, it  is that once people are fed up with a certain style of governance, they are likely to put a hold on their usual moral sensibilities and support anybody who promises to bring about the desired change.

He would later become kingmaker in the campaigns of Bugiri, Jinja and Arua by-elections that saw Asuman Basalirwa, Paul Mwiru and Kassiano Wadri win convincingly to become members of parliament.

Consequently, he was officially baptized into the typical African opposition politics by a string of trumped-up charges, including the illegal possession of a gun; faced several forms of physical harassment; was detained; banned from holding public concerts, and so on, so forth.

Following the “official” initiation into opposition politics, he has favourably planted himself in the hearts and psyche of many Ugandans. With or without his name on the 2021 presidential ballot papers, he will undoubtedly be a pivotal player in the entire general elections.

In an effort to justify their privileges, several government officials and propagandists who masquerade as political analysts, have severally reacted by referring to Bobi Wine as “empty-headed” and a ganja man from the ghetto who cannot be trusted. This is simplistic and hollow.

First, the ghetto can loosely be referred to as a part of a city in which members of a minority group live, typically as a result of social, legal or economic pressure. Ghettos are often known for being more impoverished than other areas. Given the absurd conditions that are associated with living in ghettos, it is unlikely that anyone with a better and alternative choice will deliberately choose to reside in the ghetto.

The silence about social, political and economic policies that foster alienation have left many people with no choice but to resort to living in wretched places such as ghettos. If we are going to discredit anybody’s leadership credentials by pointing to the places that raised them, we must begin by acknowledging our share of responsibility for not only creating ghettos, but also encouraging the circumstances that are constantly pushing city dwellers to the ghettos.

Secondly, referring to Bobi Wine as a former drug addict is a punch below the feet. For many, drug use starts with mere experimentation. This can stem from curiosity about what it’s like to be “high” or peer pressure. Others stumble upon drugs as an escape from the uncomfortable feelings of sadness or anxiety. Whatever the motivation or cause of substance dependence, the battle against substance use is one of the most difficult ones to beat.

There are several people who have lost their marriages, families, careers, jobs and good health due to drug-related causes. While their regaining of such crucial strands of life hinges on their ability to beat substance abuse, they have still failed.

Therefore, by continuously referring to Bobi Wine as a ganja man from the ghetto, the conversation automatically changes from one of blame, to one of praise by indirectly shining a light on his extraordinary abilities and luck to succeed at winning one of the most difficult battles and create a life for him that is enviable by many.

So, whoever refers to Bobi Wine’s history of drug use as a core tool to poke holes into his abilities to lead is unconsciously suggesting to the young people to find out exactly what Bobi Wine was smoking so they can smoke it too.

Bobi Wine thinks he can be president and he has made his presidential ambitions loud and clear several times. He, therefore, ought to be subjected to deeper scrutiny and very rigorous engagements that transcend the mere rhetoric of his intentions, promises and abilities to dislodge President Yoweri Museveni from power. Such engagements have to include serious questions regarding alternative political and socio-economic policies.

The writer is a social worker.

Museveni's regime imports seedlings from the Netherlands to grow them in our fertile soil and then exports it to the rest of the world.

Many top world leaders like Clinton and Obama smoked ganja at one time in their life. Amin used heroin Obote used alcohol and tobacco Who can really tell what is in that tea-flash Museveni always carries around with him?

You may be you will be surprised what he he is hiding Everyone is addicted to something; from food to alcohol/drugs/sex/money and even power. Even lying.
Report to administrator
+1 #3 Robert Atuhairwe 2019-09-06 19:26
Calling Bobi a ganjaman is a fact of life. Himself he knows it, was proud of it and cannot deny it. That is who he was, is.

It's like saying that Museveni was a rebel. How could he possibly deny that? Does it need defending?

What is important is weighing issues at hand and accepting criticism when it comes up. That is the change we want!
Report to administrator
-1 #4 Jama 2019-09-07 14:55
That's a non event .What's important is what the son of man is doing and what he expects to do in future.ln other word his vision for this country.
Report to administrator
0 #5 Kirya 2019-09-07 20:26
Better than the thief dictator and useless thug in the state house.
Report to administrator
+1 #6 Akot 2019-09-07 20:57
[President Donald Trump’s rise to the helm of American leadership, it is that once people are fed up with a certain style of governance, they are likely to put a hold on their usual moral sensibilities and support anybody who promises to bring about the desired change.]

Ugandans still need Museveni, when they won't, they will bring down the tribalistic system & UNITE; why not take chance with Bobi Wine, if only to ensure Museveni is out, then tribal leaders will go back to their posts & make their lands 'real countries'?

Ugandans can even Reform the Republic if that's what they want, right?

Like Americans, French went in the unknown & brought economist Macron to presidency, to ensure change of politics/policies & adopt to situation on the ground!
Report to administrator
0 #7 Akot 2019-09-07 21:16
Lysol, agreed, yet,

Today, it's the very countries that legalised drugs that are in real trouble with health department emptying state accounts so that durg/tobacco addicts with cancer...are treated!

Increasing tax on tobacco/drugs is not enough, never will be, to meet medical bills of cancer... patients as there is no real politics to awareness of the danger of these leathal substances, while more young are being lured into them!

At this point, the best means to awareness to drug & tobacco danger would be to ask musicians, movie/tv stars...to help the young, as they too have/will have children they want to be healthy!
Report to administrator
0 #8 Akot 2019-09-07 21:24
Robert Atuhairwe, understood, so,

It's time mp Bobi Wine comes out to tell Ugandans how dangerous durgs, tobacco are & start being a real leader, for a better future!

But, mp Bobi Wine can only do the right things if Ugandans give him chance, as they gave & still give Museveni!

Ugandans mut surely know if they don't UNITE & throw Musseveni out, it will be his military soon taking the seat when he dies in +30 years!

How old will Museveni's son be then?

R. Mugabe would have died in post, if he wasn't thrown out, right?
Report to administrator