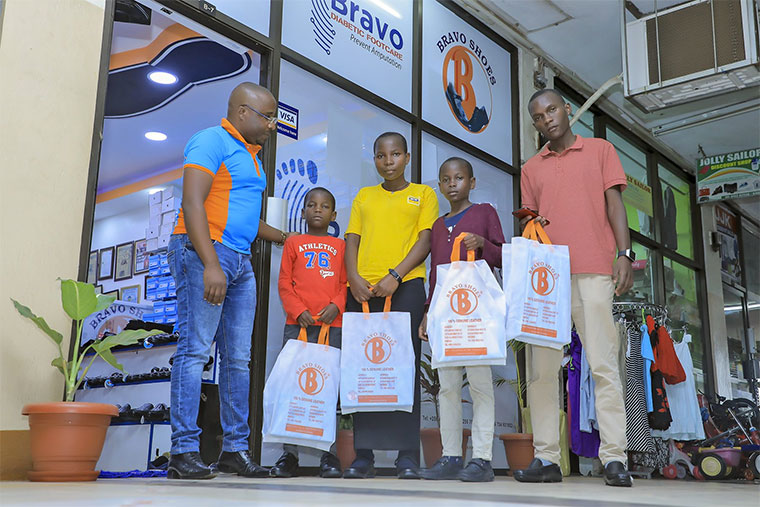 Due to social media, Makerere University fresher Henry Kiyimba Suubi has, or for now seems to, have arrived.

Popularly known by one name, Suubi is probably now known by the entire student population, and persons in the surrounding areas, especially those who own smartphones. He must also be well-known at his former secondary school, and in the village from where he originates.

He must be better known than hundreds of other freshers and students in his hall of residence, (UH); and those in other halls, his classmates and continuing students, and also members of the Students Guild.

All this thanks to the social media post (tweet) of him carrying a metallic suitcase and plastic/polythene bag as he walked to check into University Hall (UH) on his first day at Makerere University a few weeks back.

In less than a month of having reported to the university after having been offered BSc Education (Economics) on government sponsorship, Suubi has met the university vice chancellor, Prof.  Barnabas Nawangwe, applied for a change of course to Mechanical Engineering, attracted a sponsor in Joada Consult, bought a smartphone, connected himself onto social media and started tweeting. He has conducted media interviews, had journalists visit his home to capture and report his life story, and that of the entire family.

Everything has been relayed to us on television and in the newspapers. He is the darling of the media, both social and mainstream; the former having given a story to the latter, at least until we get something or something new, a scandal, conflict or worse. Before he joined university, Suubi and his family struggled to make it in life and at school, and basing on media stories, the family including siblings in particular continue to struggle.

Suubi, on the other hand, continues to reap from the metallic case and plastic bag he carried into UH. I am, however, scared for him. Everyone: social and mainstream media, which rarely sustain/maintain friends, the Makerere University community, corporate and private companies, girls, bars and his peers are all watching him keenly with their own interests.

Universities in general and Makerere University, in particular, are open, liberal and interesting places, which oftentimes turn out tough on unsuspecting and vulnerable young, naïve fresh entrants. The university opens up doors and opportunities, gives you all the freedom and independence, which when not checked and used controllably, can end one’s life journey even before it truly takes off.

The freedoms given to students can make or break those that are unprepared or unguided. There, one determines when to sleep, wake up, whether or not to study, pass or fail, sit an exam, retake a course, take leave, travel in and out of the country, conceive, abort, get married and many other important choices.

Suubi has joined the crème de la crème, where the freedoms are too much to ignore and will join others in enjoying them: studying, skipping classes, sitting for tests and exams, breaking hearts, and virginity (if this hasn’t happened already), abuse and protests against government, have his heartbroken, taste (and take) alcohol of different types and content, inhale drugs, and stay out late as everyone watches’ for mistakes.

Telecoms and beverage companies will have him promoting their campaigns and products. He could choose to stand for GRC, Guild or seek a constituency. He will want to put his story into a book.

When we joined Makerere University in the mid 1990s, we found ‘continuing’ students, who at the end of our three years had not completed their courses, even when they had joined several years ahead of us. They had started courses and for different reasons (I suspect entertainment and/or alcohol) dropped out but remained at the university. One such student eventually ‘graduated’, but his graduation party abruptly came to an end when his dad’s friend spilled the beans (my university roommate was at the party where the furious dad gave guests five minutes to clear his residence).

The pressure on Suubi to perform, excel and follow their lines will be intense, making it difficult for him to stay focused if not guided. Suubi needs to watch everyone and understand their interests and motives, the way everyone is/will be watching him.

I do not expect or advise him to spend half of his free time in one of the two chapels, but he needs guidance and help on how to manage this attention, publicity and life, to make him a better person, to his family and country. While this particular Suubi may make it through the media glare, will the hundreds joining university do the same?

Your guess is as good as mine.

The author works in the communications department at parliament.