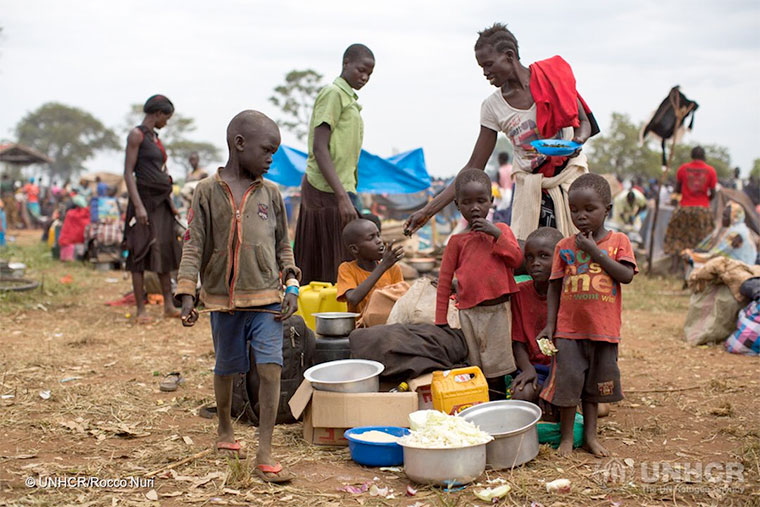 Mayors from 10 cities around the world, through the Mayors Migration Council Leadership Board, met on July 12, 2019 at a high-level United Nations political forum to discuss city-level solutions to global migration challenges.

Kampala, which hosts the world’s third highest refugee population after Turkey and Pakistan, was represented by Kampala City Lord Mayor Erias Lukwago. By 2018, the United Nations High Commissioner for Refugees estimated that Uganda is home to 1,360,000 refugees, a figure that is projected to escalate with the protracted conflicts in the region.

Uganda has been branded ‘a country with an open-door policy for refugees.’ This, coupled with the provision of legally entrenched rights such as freedom of movement, access to employment, education, and medical services, encourages the continued inflow of refugees, majority of whom are women and children who arrive exhausted and hungry.

Much as the spirit of hosting these refugees is commendable, it is clear Uganda is struggling to provide a decent standard of living for these refugees as the burden on host communities and social services is escalating.

Under international law, Uganda, as a host country, is under an obligation to protect, promote and implement all human rights and freedoms of all refugees without discrimination. Key among these is the right to education, which is an indispensable component for the realization of many other rights.

As an empowerment right, education is the primary vehicle by which economically and socially marginalized adult and child-refugees can lift themselves out of poverty and obtain the means to meaningfully participate in their communities.

Uganda’s education system is phased into pre-school, primary school, secondary school and tertiary level. However, the meaningful integration of refugee children and children of refugees especially in urban public schools remains a far-fetched dream specifically due to policy challenges.

According to the National Integrated Early Childhood Development Policy of Uganda, pre-school education must be provided in the child’s mother tongue since it is the foundational stage in human development when an individual’s development is most rapid and profound.

Additionally, Section 32(1) of the Refugees Act 2006 accords refugee children the same treatment as nationals with respect to elementary education. This is problematic, considering the special needs of refugee children especially regarding trauma and linguistic barriers which would require some form of affirmative action to overcome social exclusion.

According to research by the Refugee Law Project for example, English as a language of instruction means that refugee children and children of refugees must repeat classes, and they are often old socially for the level of education to which they find themselves, which forces many to drop out. The country’s education policies and strategies are emblematic of such shortfalls.

These policy challenges coupled with high levels of poverty resulting from the condition of refugees as well as the costs associated with education have forced many would-be productive refugees out of the education system, thereby condemning them to a miserable life of perpetual poverty in areas where they have no relatives to depend on.

In the long run, these refugees become a burden to their host communities as they are forced into criminality and prostitution. In this regard, Uganda as a host, is failing to prepare for the optimal utilization of the refugee resource. Instead, refugees are adding to the infamous statistics of street children and unemployed youths due to lack of the necessary skills.

In order to curb the mentioned challenges, government, UNHCR and other partners ought to prioritize and invest in ensuring meaningful learning for refugee children. In fact, school-going refugees especially in urban centres should be treated as a special needs group of learners and the budgetary allocations should reflect this.

Secondly, there is need to deliberately provide mental and psychological support to refugee children at school to address their traumatic and violent past experiences that would otherwise affect their growth and development.

This will help them to cope and live a normal life in their psychosocial environments which will enhance their academic performance.

Thirdly, the ministry of Education and Sports together with local governments and development partners, should address the language barrier issues especially in public schools and tertiary institutions.

Through inclusive education, the refugee children, children of refugees and youth will be able to acquire the necessary specialized skills to constructively sustain themselves, their communities and contribute to national economic development.

There exists enormous potential for Uganda to benefit from its humanitarian hospitality that has opened doors for those troubled by various calamities to have an opportunity at living a normal progressive life.

With proper planning and management of the immigration system, especially through education, refugees can greatly contribute to the resilient, safe, inclusive and sustainable development of their communities. Until then, they remain an un-tapped resource that needs to be meaningfully utilized.

The author is a lawyer interested in refugee and migration law.

UN should be the first to ensure good governance in all member states but instead, UN encourages migration & ensures poor people leave demon rulers in peace!

UN blames USA & well governed EU countries for not wanting migrants looking for: peace, education, housing, healthcare, but UN says NOTHING on useless rulers migrants are running away from!

Ah! UN assembly is the forum from where dictators, useless rulers express themselves so so FREELY & spit on the entire world!...
Report to administrator
0 #2 Akot 2019-08-07 15:20
...United Nations political forum MUST stop being ignorant, bias, blind & must know it's making the situation worse!

Refugees in Uganda fed by UN/EU eat better than in their coutries!

D. Trump gave the best & only solution to migration (NO), yet UN was the first to condemn him, but demons ruling countries migrants flee, are in peace!

Why are USA & well governed EU countries burdened by migration, still members of UN & finance it?

Why is UN not concerned about bad rule, dictatorship that is destroying even developed countries through migration?

Why is UN not aware migrants resettled in camps, a danger to climate as these areas have become dry filthy deserts with massive destruction of trees for fire wood?
Report to administrator
+3 #3 WADADA roger 2019-08-07 22:57
The open policy on entry and exit of refugees must stop. currently, we dont have any neighboring country under a serious threat save for South Sudan which also has neighbors other than Uganda.

Rwandesw, Congolese etc must go back and find a means of making their countries habitable. Soon we shall have European refugees running to hide in Uganda. Enough is enough, we must stand up against the refugees
Report to administrator