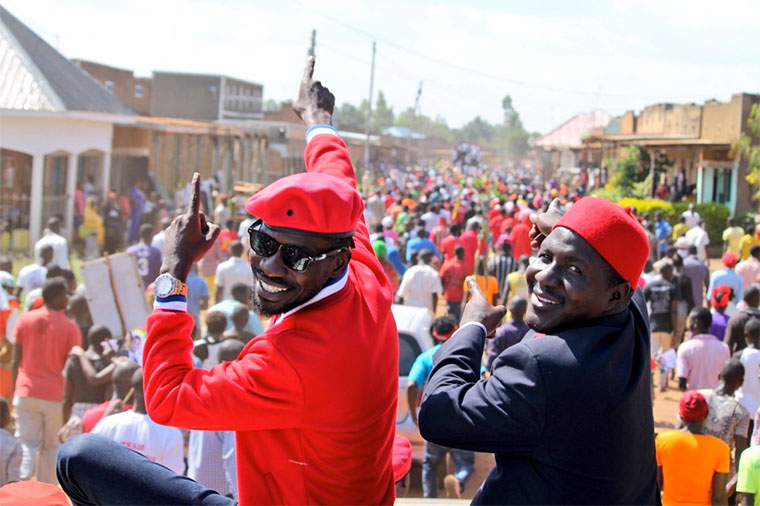 If the success of his hit single, Kyarenga were to teach us anything, is that Bobi Wine gains more political mileage as an entertainer than a mainstream politician: the song was played at weddings and funerals alike; it was played at political rallies and birthday parties.

Composed as a simple love song, the tune somehow managed to mobilise its own public and reached audiences that certainly the singer would never have imagined.

But more importantly, Bobi Wine’s uneducated and power-forsaken fans – by far the majority, and the ones he needs most – felt closely connected to their man as before. They danced to the tune and chanted his name. In the thrill of the song, they also, knowingly or unknowingly, committed their loyalty to his cause, and their readiness to die for him.

In the aftermath of Kyarenga, came Tuliyambala Engule, which equally managed to mobilise a sizeable public. But not as much as Kyarenga. It was a good one coming after Kyarenga. But its overt political contestations, and religiously-inspired sombreness – not really danceable beat – ate into its ruffian appeal.

I do not want to blame the government  ban on Bobi Wine’s music, but the singer himself has become less creative. He has also become too serious for his core fans. Thus, when government banned his concerts and music, he never gave his fans reason enough to defy – by releasing more irresistible dancehall bangers [through the media available to him].

It needs to be emphasised that Bobi Wine’s edge over  Maj Gen Mugisha Muntu or Col Besigye is that he is an artiste. He is surely not more articulate than Nobert Mao, neither could he be more eloquent than his bosom friend, Asuman Basalirwa.

By the way, his edge over all these more experienced hagglers is not simply that he sings his politics, but that he is an entertainer. And lately, Bobi Wine has ceased to entertain.

Sometime last year, I argued that to stand a chance at the presidency, Bobi Wine will have to deftly craft for himself a personable double identity: identify both as a well-cultivated gentleman – capable of sustaining debate at supposedly elite platforms such as the Capital Gang or the Frontline – but also keep his hue as hard-boiled “Rastafarian.”

What has happened, however, is that Bobi Wine has successfully transformed himself into a well-cultivated dandy: You will see him step out in designer suits and ties, and a “Louis Vuitton” suitcase in hand!

His English rolls well on the tongue, too. This is a commendable feat, but it alienates his core constituency. This is dangerous for he needs the “wretched wananchi” more that the dark-suited pretenders he is appealing to.

See, a brawl with Bebe Cool over who is the best artiste in the land is more politically powerful than a speech at the floor of parliament. Musically wrestling with Jose Chameleone is more beneficial than harmoniously appearing at a DP rally: controversy is the name of the game.

Let me reiterate an old argument of mine: under the current nature of our politics, there is only one way Bobi Wine will fundamentally shake up things. That is through popular uprising on the streets of Kampala.

By this, Bobi Wine has to sustain the sweet-talk about standing for the presidency in the forthcoming election – which is absolute baloney, but saves him from jail – but quietly organise for a popular protest.

And quietly he must. Or any opposition players. They have to step outside the media, and avoid any confrontation with regime authorities. The quietness must be deep enough in that it also beats the networks of tapping laid down by the NRM. But for Bobi Wine, his main assignment is keeping his core fans interested.

The point I’m labouring here is this: Bobi Wine has to appreciate that the major contribution he will make to the struggle for change in Uganda is helping set off and sustain a popular protest.

To do this, he has to keep closer to his uneducated and underprivileged folks who, for having too little to lose, are always ready to throw stones and engage authorities in street battles.

This relationship was created, and is sustained through entertainment. Bobi Wine’s crew has to reinvigorate Firebase Entertainment, think and create more danceable disco-dance bangers. The lyrics do not have to make much sense, they simply have to be entertaining.

Ugandans can stop being slaves, migrants, refugees without say in a country they say belongs to them & formed by their tribal lands!

What is paying allegience to tribal belonging & worshiping tribal leaders living so well under chief Museveni, brought to subjects?

Yusuf Serunkuma has understood that without UNITY, Museveni is going no where & he's joining the demon now!

Are tribal leaders not turning blind eyes-deaf ears to sufferings of their own?

1 of Kadhafi's son was prepared to take over after father's death, but UNITY of Libyans didn't give that family chance, right?

UNITY of Ugandans with just 1 common leader will FREE them & they MUST then go streight for Independent Tribal States or Reform the Republic & avoid tribal war, as in Libya!

Without tribal leaders standing down or forced to by Ugandans & UNITY to leave Museveni no land to stand on, he's going no where. This Phd knows it now & is joining Museveni using media, believing Ugandans won't understand what he writes!

Which tribal leader supported Dr Besigye & now B. Wine or said a word when these 2 were terrorised by Museveni's security?

Which tribal leader is concerned about Dr Nyanzi?

But Ugandans can also say NO to Museveni & tribal leaders at the same time by UNITING & blocking the chief tribal leader & force him out & this will leave no chief for tribal leaders!

Ugandans have no choice, but to UNITE or Museveni & family are going no where!
Report to administrator
1234