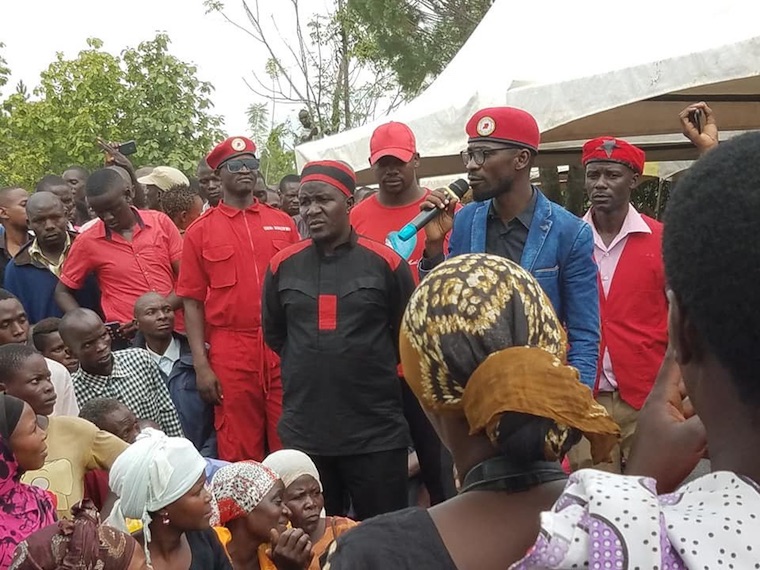 We have seen NRM/government spokesman Ofwono Opondo strap himself in oversize khaki overalls at public functions.

Asked why he has lately taken to overall suits, in typical Opondarian fashion, OO – as is fondly known by peers – answered that he was a farmer, and overalls were the ultimate outfit for the farm.

He wears the same to The Capital Gang show on Capital radio, and bangs the same outfit to media briefings nowadays. And I bet he became a farmer only recently.

In truth, like his other peer in the game, the loquacious analyst, Tamale Mirundi who nowadays adons a yellow beret after Bobi Wine’s red one, OO has been inflicted by the Bobi Wine bug of protest fashion, but disguises in khaki colours as an inflection of the red overall trend.

It is difficult to say exactly when and how the wearing of overalls started. But we do know that as an activist, Bobi Wine has given the red ones a life of their own. Red overalls are now a way of expressing oneself in politics – and have also become a statement of association with the whirlwind that Bobi Wine has become – albeit often opportunistically.

Overalls have become the fashion of the struggle against President Museveni. Being the kingmaker of the present, whatever he touches gets a life and suddenly becomes lucrative: an overalls knitting industry is thriving in downtown Kampala as many political players – especially aspirants and newbies – have found it a relevant outfit for a successful opposition political career, plus the red berets.

But these overalls are not random fashion; they have deeper roots in struggles against economic and political exploitation. Let me narrate this history, and perhaps demonstrate their intellectual bite in our present politics.

Perhaps made more popular by Hollywood where prison inmates tend to be depicted in overalls, the fashion has become associated with denial of freedom – not necessarily for earlier crimes committed.

By popularizing red overalls on the streets of Kampala, Bobi Wine symbolically and effortlessly declares Kampala a massive open jail.  The picture that emerges is that despite being free to go about their errands, Ugandans are like prisoners – who have been systematically denied their freedoms and rights by an arguably exploitative system.

By this, Bobi Wine extends our understanding of prison, taking it outside high security walls and chained bodies, to the open space: prison thus becomes a discursive term signifying both a state of mind and a national condition.

Read through the lens of factory workers, on the other hand, we start from the understanding that labourers across the world – since the birth of capitalism in the 1600 English countryside – are exploited for their labour to the advantage of the owners of capital – the capitalists.

Since labour is measured in terms of time – labour time, that is, “hours of work” – Marx has showed us that capitalists are able to make profits only by remunerating laborers for less hours than what they have actually worked for.

They are paid according to the much they need to survive, not the much they have produced on the factory in a single day.  If a labourer needs to work for four hours to earn their livelihood for two days, the normal job is either eight or ten hours. Despite giving labour for 16 hours, they will be compensated for four, which is enough for their subsistence.

But upon learning of their exploitation, labourers start making demands to raise their pay, and improve their working conditions. However, since the capitalist is obsessed with more profits to invest further afield, factory hands are left with one option, rioting and burning equipment to change the status quo.

This sensibility informs the wearing of red overalls and helmets by the South African political party, tellingly named, Economic Freedom Fighters (EFF). With his red overalls, Bobi Wine, thus, visibly seeks to point to the relationship between the exploitation of the Ugandan wananchi by the fellows collecting taxes, and also in charge of the country’s vast resources.

One might say, the red suits and caps of the Togikwatako campaign have been transformed into overalls. And since colour and style of dress – especially for men – is yet to be regulated, fashion continues to emerge as major mediation in our politics.

Like Besigye’s red shirts during the walk-to-work campaigns, a Bobi Wine-led revolution might be held in red overalls. The Che Guevarian berets would then complete the packaging.

What has ever happened may occur again but just in a different form.Hassan Ddugga's song "Byavadda" talks about it too.

Thanks for enlightening the nation.
Report to administrator
+1 #2 WADADA roger 2019-07-04 23:18
Underneath, the NRM is in a state of panic
Report to administrator
+3 #3 WADADA roger 2019-07-04 23:27
The Government needs to be careful with this man that a Muganda would gladly call Mbwa Gwe- to mean a wise man, this writer can cause a revolution in Uganda, where is the CCTV camera to magnify his irony for many slow thinking Ugandans to understand his well thought out serious jokes.
Report to administrator
0 #4 Lysol 2019-07-06 00:45
With no due respect to Mr Wine, the UPC would sue his movement for adopting the color red, since that has always been the UPC's national color.

The DP has green, the NRM; yellow and of course that FDC with blue. The overall outfit is more of the 80s. Even one Museveni sometimes dons his outdated military (tank) overall with his rusty AK47, whenever he is having a bad day.
Report to administrator
0 #5 Lakwena 2019-07-08 12:37
In other words Yusuf, for lack of originality, there are copycats everywhere.

There are even copycat kidnappers, who go the mile to kidnap themselves.
Report to administrator