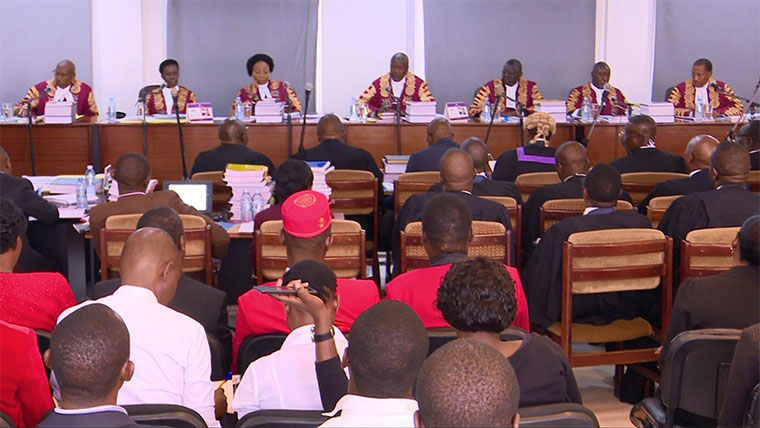 The article carried defamatory innuendos against me to which I am compelled to respond in these same pages. Opinions like those of Sserunkuma, that “It is also absolute idiocy to go to the judiciary in a case against President Museveni -like you just arrived from the Arctic’’ are intended to mislead Ugandans into a docile and dormant state as Museveni and those earning from his government thrive while the majority suffer.

If one is not interested in Museveni’s rule, I would have expected him to encourage people to be proactive. Going to courts, however weak Museveni has made them, is akin to a man in a home whose house has been invaded by robbers with heavy machine guns but only has a stick in his house.

If Sserunkuma would advise that man to give away his family belongings, I would advise him to fight using that stick as well as making a loud alarm because if he does not do so, the robbers may even end up raping his wife and daughters.

Oftentimes, the alarm will be responded to by the entire village which may force the robbers to flee or they may be rounded up. This is what happened in Mbale. Although the Owiny-Dollo-led majority justices fell short of their duty in refusing to set aside the entire Act, they nullified the seven years’ extension by Parliament which Museveni was also warming up for by preparing a referendum to extend presidential years. How would this have happened if we did not petition the Museveni-weakened courts?

It is also not good to lump up the judiciary especially in decisions which are made by more than one justice. Lumping up justices Eldad Mwangusya, Prof Lillian Tibatemwa Ekirikubinza, Paul Mugamba and Kenneth Kakuru (who were categorical that the process of amending our constitution was illegal and set it aside) with Bart Katureebe, Arach-Amoko, Opio-Aweri, Jotham Tumwesigye, Owiny-Dollo, Remmy Kasule, Elizabeth Musoke Cheborion and Barishaki (who pretended as if they were expatriates with no citizenry duties to protect our constitution) is the most unfair thing for serious Ugandans to do.

These gentlemen and the lady-professor are going through a lot because of their standing out to be counted with majority Ugandans who refused the age-limit removal and that needs to be recognized by every person talking about the age limit judgments at both courts, lest we discourage other judges from standing by our side in future.

The judiciary is a hospital of sorts where litigants go to seek attention of their legal condition, where managers are supposed to be competent and independent. What happens when they slide into dependency and incompetence?

Do you blame patients for going there yet one village member like Sserunkuma thought that they are the opposite of what they are supposed to be? I think not. The right people to blame are the majority justices at the Supreme court and the Constitutional court led by two former Museveni ministers in Katureebe and Owiny-Dollo, respectively, and not us who expected them to be responsible citizens.

Sserunkuma’s article is emasculative of our efforts, now at the East African Court of Justice whose expenses are unbearable to a public private interest litigant and for which I launched a fundraising drive.

In fear of its relative independence - because Museveni appoints one judge at each level - the age-limit removal supporters, who once stated that after the Supreme court we would only resort to God have started spreading falsehoods that the East African Court of Justice has no power to annul the Ugandan law removing age limits.

If that court had powers to nullify several sections of Tanzania’s Media Services Act, 2016 on 28th March 2019, how does it lack powers to annul the Ugandan one which has been held to be illegal by four Museveni-appointed judges?

I call upon people who believe that we inherited this country from our ancestors and are hence duty-bound to protect it from excesses of selfish rulers not to be diverted by regime.

The writer is a petitioner against the age-limit removal.

The point is, it's mostly Baganda who have left Uganda for better livelihood overseas and that has a snow ball effect on Buganda.

Also, yes, Omutanda gyali aterede, however is Buganda also comfortable? Look around you, I mean in Buganda. Because M7 is looting the country naked and also giving it to bogus investors, Buganda has become the United Nations.

Banyalwanda, Bayindi, Badinka, Basomali, Bachayina, you name it! Well, what you see is what you get with me. You could give me the world, you can't change the truth, and that is "Omutanda gyali ateredde." That is why M7 has ruined Uganda for 33 years and still counting.
Report to administrator
0 #72 Remase 2019-05-31 17:43
Kent Mawa, "I have not Heard Mengo people saying the things you quote them to have said."

Give me one reason why Mayiga passionately congratulated M7 for rigging the 2016 elections and further urged us to accept them.

Give another why Mayiga, who clearly knows that M7 is a pathological liar, urges, those he refers to as people after power, to have a dialog with Sabalwanyi.

That was after M7 lifted the age limit from the constitution. Why Mutebi keeps visiting Sabalwanyi in Entebe over and over, and then welcome him at his palace.

I mean if these are not best friends, then what are they? You would think that Nabagereka and Janet are twins!

They are always together! All the actions and statements point to one conclusion the triple M7 are sending, "Awangale ai Sabalwanyi M7!" Why? Because, to them, M7 is the best president Uganda has ever had! Mawa, 33 years have been "mawa" to M7 and the triple M and they still want more.
Report to administrator
0 #73 Remase 2019-05-31 18:07
Kent Mawa, "f Akot has forgotten that it was Obote and UPC that not only disliked "tribal leaders" but sent his tribal army to attack and destroy them." Mawa, where do you get the idea that M7 likes tribal leaders?

Is it because that M7 restored the Kingdoms? Think twice. M7 has never liked and never will like tribal leaders. Remember the Kayunga/Bugerere saga?

If M7 requires Nyanja Temanyirwa a visa to travel around his own country, how about you and me? It has just happened recently during "Tojikwata ko." The opposition were refused to go to some places of the country!

Kyagulanyi and Zaake had been denied to seek required treatment abroad! Yes, Obote disliked tribal leaders, so does M7. I bet M7 regrets why he was forced restored the Kingdoms. But they are "Byooya bya nswa without federo!
Report to administrator
0 #74 Remase 2019-05-31 18:44
Wooden K & Kent Maya, this is the statement from the Ethiopian PM, "I don’t believe that it’s proper to stay in power for long periods of time."

Then come out and urge those after power to have a dialog with Sabalwanyi M7? The come out and say that M7 is the best president Uganda has ever had! Then he said that we should just give M7 time to improve on human right abuse, fight corruption, fight unemployment etc. If 33 years aren't enough, what is?

Baganda say, asilise teyejusa, meaning, if you don't have anything good to say, keep quiet. All actions and statements from the triple M7 point in one direction, Awangale ai Sabalwanyi M7!
Report to administrator
0 #75 Wooden K. 2019-06-01 14:05
Remase , listen to Kent Mawa if you do not believe me:

you have this habit of creating your own facts.
It does not work.

After 74 comments , you have provided NO EVIDENCE to back your endless rants.

Your other problem is that your intellectual IQ is very low. You lack the capacity to separate issues or debate issues under their correct context.
But I decided to educate you and I will keep on doing it
So help me God
Report to administrator
«345678