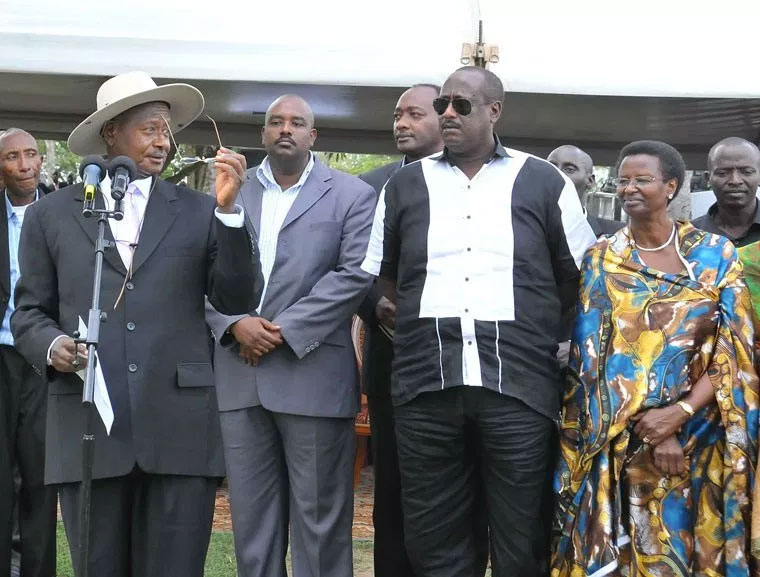 Let me begin this way: I would not only support a coup led by Gen Salim Saleh, but also support his candidacy in the fake election that would be organised thereafter, which the already existent military-NRM machinery would help him steal and take the presidency.

Let me be clear: Dr Kizza Besigye is a good man who has surely braved Museveni’s shameless misfortune and embodied the struggle for change for years. On his part, Bobi Wine has so heroically animated political discourse in Uganda, and pumped new life into opposition politics.

But when, with a prophetic eye, I peer into the future – like Timothy Wangusa would put it – I do not see any of them taking the presidency after Museveni. This does not mean their chances are exhausted. But they cannot take it from the current haggler. In fact, they are even bad for the country if they so successfully clinched the seat from Museveni. Let me explain.

If the revolutions that have happened elsewhere in Africa were to teach us anything, it is that change is often internal. Big thieves hand over to smaller thieves with whom they have been together in the game.

The longing to move from an autocrat to an all-clean democrat is a noble rallying cry for revolt, but stubbornly difficult in practical terms. There is a time in the life of an autocrat when power ceases being a project of an individual, but one with myriad vested interests – more powerful than the man holding the reins. These interests have to be cleverly negotiated.

Again, I am not saying Gen Saleh is the most sophisticated candidate for a new democratic dispensation. Far from that. By the way, for Saleh’s own good, those close to him say he is more moderate than his brother.

Fellow combatants claim he was daring and quite deadly in their bush war, but also say, he has ably matured into civilian life – although he maintains a firm presence in the military. But it is not for these seemingly good attributes of his that I would support his coup. Rather, it is the ills he embodies that render him most suited to take the presidency from his brother.

Look, Saleh is street-smart who has cut cut deals with almost everybody with interests in Uganda: Buganda kingdom, Catholic church, media, Rwandans, Chinese, EU selling refugees, Americans, South Sudan, multinationals such as MTN, banks – and the wolves at Parliament avenue.

He has either twisted or amicably negotiated with them [and please ask me for no evidence – even Gen Saleh doesn’t have it; they tend to make and keep no evidence]. With President Saleh on cards, all selfish interests will see continuity while slowly negotiating newer contacts and approaches. To this end, they (especially banks, foreign powers and multinationals) will not have the impulse to mess the country like they would if it fell into the hands of a ruthless custodian – such as Besigye or Bobi Wine.

If Libya and Egypt were to teach us anything, it is that international interests are keen to mess up the country for their interests. In the era where coups are no longer valid political processes, foreign interests conspired with the military and overthrew a democracy in Egypt.

If we looked in the direction of Libya, the absence of another strong man to oversee the transition partly explains the mess we are witnessing – of course, with foreign vampires marauding everywhere. A strong man has to emerge and superintend over a transition in Sudan. It is Mugabe’s Zimbabwe that offers the smoothest example of ending elective life presidents. Mugabe’s buddies are overseeing the transition to a more democratic dispensation.

The point I am making is this: revolutions take time. It never jumps overnight from filth to snow-white. It took Museveni five years to take the chair from President Obote. There had to be caretaker presidents as the transition happened. There are middle-grounds that have to be negotiated with patience. Presently, there are thousands of interests – local and foreign – watching Uganda so as to repackage their tusks.

And Museveni, high on life-presidency, has done well guaranteeing them. He is buying refugees, the Nyekundires are not paying taxes, Indians are cutting deals – and all these need guarantees of continuity. Even Mr Museveni needs guarantees of safety. Gen Saleh embodies both these interests and securities. Ironically, however, it will be Besigye and Bobi Wine’s intensified activism that will make a Saleh coup possible.

European elecltion results saved UK from being destroyed by monarchs/power hungry/dictators with absolute power in Brussels who control member countries' budgets, frontiers...& won't accept any country to leave it!

Europeans said 'enough is enough, now they can reform EU as the people want!

Ugandans don't want to UNITE to throw Museveni out, but they can form Inedpendent Tribal States to avoid chaos when Museveni will be no more!
Report to administrator
+2 #12 Zaitun 2019-05-28 09:44
"If Libya and Egypt were to teach us anything, it is that international interests are keen to mess up the country for their interests."

You should know that the country has already been messed up by the ruling family and international interests.

With all the shit you have written to convince us of the good values Gen Salim Saleh, I think you have been paid to do so; for Uganda does not deserve any of these family brothers any more. We have to take the bulls by their horns. It is utter nonsense to tell us leave the country to in their hands.

You should know that the country has already been messed up by the ruling family and international interests.

Uganda does not deserve any of these family brothers any more. We have to take the bulls by their horns. It is utter nonsense to tell us leave the country to in their hands.

Do not think that these guys are eternal. There is no eternity for mortals.

Reason Ugandans MUST listen to Akot & UNITE so that they decide what kind of governance they want! The RED to Akot is telling Ugandans they are idiots, stupid, naive, lack brains!

UNITY& NOW to stop Museveni, international interested in our land riches while turning blind eyes to our miseries, due to the ttribalistic system that only we can bring down & Museveni with it!
Report to administrator
0 #14 Akot 2019-05-28 19:25
Ugandans should see how Europeans & their different political parties have, are UNITING to ensure they make their stand, face to power hungry monarchs in Brussels only concerned about; power, money, control of people's freedom to just live!

European election results has made europeans feel at home & this, they have not felt for so so long & they know they should never stop until they get what they want!

Ugandans MUST UNITE & NOW to throw Museveni & the entirde tribalistic system out, before he locks them in war with coming fake election he has already won!

Without Museveni, Ugandans will go for the kind of governance they want, especially as there is no common opposition leader Ugandans want to UNITE around!

After Museveni is thrown out in UNITY, independent tribal states or the Republic MUST be Formed/Reformed immediately!
Report to administrator
+1 #15 ben 2019-05-29 04:29
So sad, journalist turned propagandist. It`s hard to trust African elites and intellectuals.

How can you compare a young innocent man to those corrupt bloody warlords?.

But we are living in a global village and the world citizens are more involved in protecting the new generation than ever before. Wine is the first African leader to benefit from the new tech infosystems.
Report to administrator
0 #16 Robert Atuhairwe 2019-05-29 18:06
Forget the "wanters"! I will upstage them all
Report to administrator
12