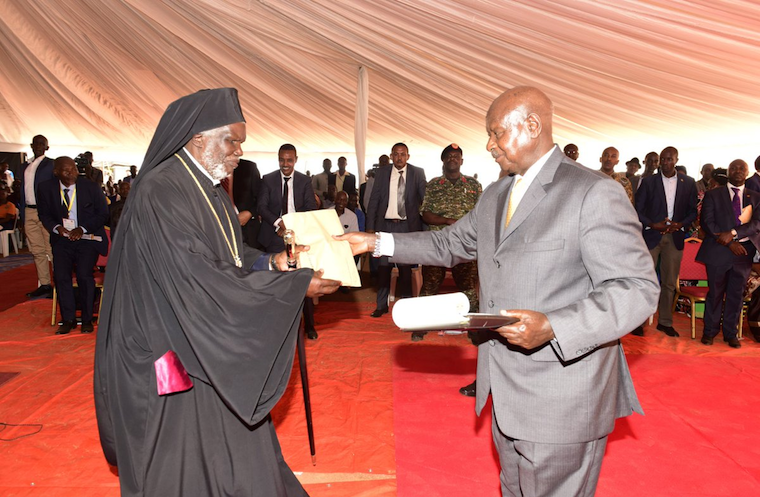 As a diversion and cover up, Gen Yoweri Museveni is attacking MPs, his usual punch bag and scapegoat for many failures.

While presiding over a function to launch a book on his contribution to the Muslims in Uganda two weeks ago, Museveni attacked MPs for increasing their allowances. He also used the same function at Saza ground in Kasangati to attack me and Kyadondo MP Robert Kyagulanyi. We - Kyagulanyi and I - are the reason people in this area are poor.

The civil society, especially a group calling itself Budget Advocacy something, even addressed a press conference to attack MPs. They reasoned and rightly so that the about Shs 63 billion that MPs have budgeted for fuel refund can actually help buy medicine if given to National Medical Stores (NMS).

My opinion on MPs and their allowances is now known. But I can restate it for purposes of this article.  I think Uganda can do better with less than 200 MPs. I also think these MPs (200) should be properly facilitated. We are now 450. I have also presented a motion for a motor vehicle loan scheme which government requested to stay.

Back to the MPs’ allowances. There is a proposal in the budget to calculate MPs’ mileage allowance as per the pump fuel price. At the moment, we are paid, I think, about Shs 3,600 per litre. Because our mileage is calculated in terms of litres required, I think it makes sense to keep adjusting it when fuel prices go up or down.

That is the proposal in the budget. It is to bring the cost to the pump price. Trouble is that because of the huge numbers involved, any adjustment ends up in billions. And parliament is not an easy group to defend. There are many unforgivable mistakes we have individually and collectively made. Our performance remains questionable.

The budget of parliament has, for example, as a result of these adjustments, now gone to Shs 561 billion. This means that the tax-papers are spending Shs 1.5 billion on parliament every day. This is the money that parliament requires to pay about 400 members of staff, 450 MPs, building a new chamber because of numbers, building a new parking because of numbers and buying all sorts of things from vehicles to furniture.

This is a big figure considering that the total budget for the judiciary is Shs 151 billion only. The country in fact needs more judges and magistrates than MPs. Unfortunately, Museveni these days also donates constituencies and districts.

Be that as it may, I think the media and civil society have naively misdirected the debate on the budget. For example, the media has not informed the public that Museveni’s budget for donation has jumped from Shs 80 billion of last year to Shs 200 billion in the next budget. Mulago hospital budget is Shs 71 billion.

This is one of the items to be financed under State House budget. In total, State House budget has grown from Shs 274 billion in 2018 to Shs 407 billion. And by the way, Uganda Heart Institute needs Shs 256 billion to build and equip itself, which is not provided for in the budget. And Museveni has given himself another Shs 68 billion for classified expenditure under State House. Classified expenditure under Defence is now over Shs 600 billion.

What the public must know is that a big portion of this money that is being splashed is borrowed money. If you look at what the ministry of Finance calls resource envelope, our budget will be Shs 40 trillion.

The item that will consume more money is interest payment at over Shs 3 trillion. And nearly half the budget will be financed by borrowed money. We will borrow Shs 6 trillion to pay money we have picked from commercial banks through treasury bills and bonds. We will also borrow more than Shs 7 trillion from external sources such as the World Bank to finance roads and other projects.

It is the reason our debt as a country is now, I think, over $12 billion yet our total GDP is $27 billion. I know stories about MPs are sensational but we need to discuss abuse of public resources in general.

Museveni’s ostentatious expenditure should receive the same amount of publicity as that of MPs. In fact between Museveni and MPs, our money can be redirected to better use. Maybe the country has given up on Museveni. The MPs and parliament are a legitimate target over budget but let us not use them to let the man himself escape.

How can he claim to fight corruption when he goes around dishing tax-payers money like candies. What a big joke with no morality!

Time will come when he will be held accountable. In a real constitutional democracy, he would be impeached and removed from office with disgrace and imprisoned (Lock him and his cronies up). He can't always bribe his ways to remain in power for life.

Those who take his "monies" should always be ashamed and be regarded as criminals too ; for abieting and condonning a criminal
Report to administrator
0 #12 Kirya 2019-05-18 21:22
m7 the best donation for Uganda is for you to retire peaceful without bullets flying!

Many of us live outside Uganda and we are sick and tired of hearing your name!

We are asked why you are a dictator! Sometimes you are compared to Idi Amin! You are the post boy of greed corrupt and useless black man!
Report to administrator
-1 #13 kabayekka 2019-05-19 09:32
This is a good article that brings out to mind for many citizens of Uganda the question of what type of a leader should this country expect when this big spender ends his reign?

Furthermore, "Museveni’s budget for donation has jumped from Shs 80 billion of last year to Shs 200 billion in the next budget. Mulago hospital budget is Shs 71 billion."

Fellow Ugandans, I'm not picking on the triple M or some religious leaders because they are the only beneficially of M7's donations. It's because of their significance and most importantly their followers.

M7 knows it better than us, who need the true and meaningful change, and that is why he keeps donating them money, gifts like cars and gives Mayiga and Mutebi the protection of the army/SFC. If those who don't need "Money" to survive betray us, how about those who are starving?
Report to administrator
+2 #15 Remase 2019-05-19 15:50
M7 has given religious leaders money and Pajeros. M7 has given Kabaka Mutebi gifts of cars and money on his birthdays.

Then in return, Mutebi goes and visits M7 for a photo opportunity to show that M7 is the man. Then Nabagereka invites Janet M7 to be the chief guest on her occasions. All that to shown that there is no need for change!

Then as if that is not enough, Nabagereka makes certain that they are inseparable with Janet. They are like twins! They both attended the wedding of (a signore crook), Jim Muhwezi's son!

Then Mayiga "nakuuta akadingidingi" that we accept the rigged elections! And after M7 lifted the age limit, Mayiga urged those who are after power to have a dialog with M7! Then Mayiga makes his views about M7 very clear and tald us that M7 is the best president Uganda has ever had, and "Awangale ai Sabalwanyi M7!"

NO , it's corruption , taxpayer's money misused to rent support for a failed regime in a failed economy.

Effects of living a distored reality is to think or believe that u can stop a change whose time has come." Great observation.
Report to administrator
0 #17 kabayekka 2019-05-19 17:30
Or in a different perspective even if the current Uganda leader has told the public that he is already rich, that for President M7 to stay put in power for the next 12 years, the amount of expenditure he has managed to make at the above rate since 1986 for 40 years to 2026 will be in the range of 24,000 billion shillings as Presidential donation money.
Report to administrator
0 #18 Remase 2019-05-20 14:46
Akot, "And only by bringing down the tribalistic system will Ugandans understand it's them, together, who have the power to throw the thugs out!"

This is a grate question, "Why is Museveni allowed to loot/destroy the country freely, while using Ugandans to stay on?"

Not only that but M7 use country resources and tax payers' money to pay for cheap support and rig elections! Those who are the beneficiaries don't not want a change. Some come out and criticize M7 so that he can give gifts and/or money because they know that that is what M7 does.

Look at Betty Kamwa! Then the above Bishop, Lwanga! How about Bishop C Lwanga? He once told us that someone called him and threatened to kill him like they killed Bishop Luwumu.

M7 called him and gave him 50m and nothing was said about the threat and/or who made it! Then C Lwanga was the chief guest when M7 was celebrating his 33 yrs rule! Fellow Ugandans, Akot is right. Unity is the answer.
Report to administrator
0 #19 Akot 2019-05-21 14:36
Remase, thanks.

Museveni is the luckiest migrant ever seen; he controls Ugandan tax money, parliament, court & rules through the tribalistic system that locks Ugandans with him but out of today world!

What a pitty, Ugandans go along as if Museveni will live for ever & they won't be faced with their tribalism & the tribalistic system, when he will be no more!

But of course Museveni has already assured his family succession by putting his son in top military position!
Report to administrator
0 #20 Akot 2019-05-25 19:08
Quoting Remase:

"Why is Museveni allowed to loot/destroy the country freely, while using Ugandans to stay on?"

M7 use country resources and tax payers' money to pay for cheap support and rig elections! Those who are the beneficiaries don't want change. Some come out and criticize M7 so that he can give gifts and/or money because they know that that is what M7 does.

Fellow Ugandans, Akot is right. Unity is the answer.

As it's Museveni & him alone allowed to rule, what will those bought off do when he will be no more?

Will Ugandans go for Independent Tribal States then?

See, lack of UNITY at a time when it's so need, has brought UK at the mercy of Brussels! British are fighting for power, while Brussels is ensuring it gets money & doesn't care about how British live!