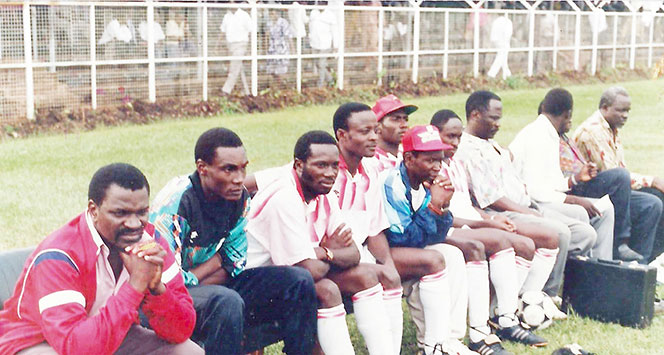 The Express FC bench in the nineties

January 21, 2023 marked 32 years since Express FC moved into Muteesa II Stadium, Wankulukuku as its home ground. At the time, the swampy Wankulukuku had been abandoned and dilapidated.

For starters, by 1990, Express FC was using Nakivubo stadium as its home ground, which it shared with KCC FC, Coffee, Nsambya, Spear Motors, and Uganda Airlines. At the time, SC Villa had moved to Masaka Recreation ground which they had turned into a fortress after winning the 1990 league comfortably.

This sparked the brilliant idea of Express having a home field if they were to win major championships. Remember that Express had last won the league in 1975, so they were looking for their first championship since then.

Express supremo Vincent Bbale Mugera used his Buganda kingdom connections and secured the facility, but that was not the end; the stadium was in a sorry state and needed to be revamped. Express needed to work hard not only to meet the deadline for the start of the 1991 league season, but also to clear the venue for the league.

In December 1990, Express management embarked on fixing the drainage system and the playing surface. A makeshift pavilion was also erected, and restrooms were also put in place. The inner fence was also worked on as per the Fufa rule, and a perimeter fence of iron sheets was also put up.

Fufa, through the National Football League Committee (NFLC), cleared the facility for the 1991 season but asked the club to work on other remaining areas during the season

To mark the grand opening of the stadium on January 14, 1991, the management organized a mini-tournament involving Kenya’s Rivatex and the three top local sides, namely Express, SC Villa, and KCC. The first match was between Express and Rivatex.

The explosive match ended in a one-all draw, with Rivatex scoring through Alfred Odong while Robert Aloro scored Express’ equalizer. The Kenyans also went on to defeat SC Villa and KCC by identical 1-0 scores.

The first league game at Wankulukuku was played on January 21, 1991, with Express hosting Coffee FC. The match, which was officiated by Fifa referee Christopher Yolisigira, also attracted a big crowd, and at the end of the last whistle, Coffee beat Express 2-0.

The visitors’ goals were scored by Richard Mugalu and Mathias Kaweesa. Express, which lost their second league match 1-3 against KCC at Nakivubo, went on to win their next two games against Entebbe Young and Nytil 2-1 and 3-0, respectively.

At Wankulukuku, Express has won and lost numerous games, but some were forced to be abandoned. The most chaotic game at Wankulukuku was the May 10, 1997 league game. This match was between Express FC and arch-rivals SC Villa.

The match ended 1-1. However, police fired into the air to disperse the rioting Express fans that pelted the SC Villa bench and police with stones. Fans were angry with referee Stephen Muleyi’s decision to disallow a would-be Express winning goal.

The match stopped for 30 minutes as police fired into the air to disperse the irate fans. The game resumed but after the final whistle, fresh trouble started, forcing riot police to yet again fire in the air.

Fufa suspended games at the stadium for the rest of the season, and Express matches were forced to relocate to Nakivubo stadium. On May 4, 2000, after Express drew their match against Kakira FC, fans stormed the pitch and manhandled referee Abdallah Kayiwa.

They complained that the referee did not award their side a penalty when Maurice Sunguti was brought down in the box by Richard Mukasa. Fufa moved fast and suspended Wankulukuku stadium. As a result, Express relocated their next fixtures to Barifa stadium in Arua.

Despite all Wankulukuku’s negative publicity over the years, The Red Eagles have achieved a lot there. In 1994, they walloped Arua Young 8-0 and in 1997, they whipped Nateete 7-0.

The club has also won four league titles at Wankulukuku. They won the 1993, 1995, 1996 and the 2020 league titles. Surprisingly, Express, which in 1998 shared Namboole stadium with archrivals SC Villa and KCCA FC, currently shares Wankulukuku with the former.