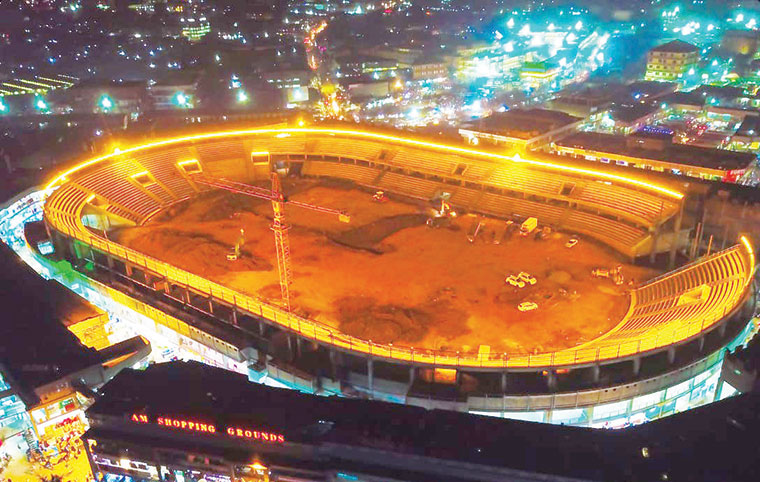 Government’s goal to turn Nakivubo stadium into an ultra-modern sports complex is gaining traction, developer Hamis Kiggundu has said. Last week, the businessman took The Observer on a guided tour of the $49m project which he hopes will be completed before the end of the year.

Ham, as he is popularly known, noted that the exterior facade of the seating arena has been completed while drainage works are also soon to be completed.

“The hardest bit of work is done and what is left is to complete the different utilities going to be hosted at the stadium,” he said.

To deliver on the legacy commitments, Nakivubo will feature a gym, medical facility, restaurants and other amenities. With a capacity of 35,000, Nakivubo will be host to several sports disciplines such as football, volleyball, athletics and boxing, among others. Ham also implored Ugandans to embrace a mentality of belief in such mega projects.

“The Nakivubo redevelopment project is not just a sports project; this is a legacy. If I can, you too can do more to make Uganda a successful country with reason,” he said.

“Oftentimes, multimillion-dollar projects are given to foreigners but with the progress of the redevelopment, I want to create a mindset shift that we can also do it.”

Ham further directed Roko Construction, the contractor, to expedite the project now that the hardest bit is done. In 2017, government decided to bring down the old dilapidated stadium after years of neglect and whereas the redevelopment was projected to last four years, the Covid-19 pandemic slowed it down.

If completed, the redevelopment of Nakivubo stadium could come in handy for Uganda’s bid to co-host the 2027 Africa Cup of Nations (Afcon) finals with neighbouring Tanzania.

Currently, the Nelson Mandela stadium, Namboole, the other major stadium in the country, is also undergoing refurbishment to meet the required standards to host tournaments of Afcon’s magnitude.