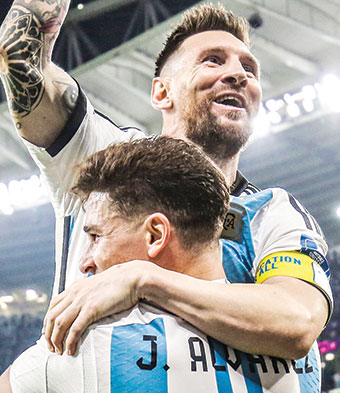 Argentina skipper Lionel Messi celebrates one of his goal

A few months to the tournament, Argentine maestro Lionel Messi announced that the 2022 Fifa World Cup in Qatar would be the last of his illustrious career.

And in the four matches the PSG man has played for La Albiceleste, he has looked like a man doing everything he humanly can to lift the only trophy missing in his trophy cabinet.

It is 12:25 pm at Lusail stadium in Doha. Lusail is the venue where the 2022 Fifa World Cup final will be played. It is a magnificent 80000-seater Arena which will stage the biggest match in world football come December 18. But on this fine Tuesday, November 22, this aesthetic bowl of sporting splendour is hosting Argentina vs Saudi Arabia.

The stadium is packed to the rafters. There is no empty seat. Every inch of Lusail is full. The media tribune seats have also been fully occupied. Time has actually stood still. And the reason is because there is one man who is at Lusail. That man is the little genius. The Flea, as they call him in Spain.

There are no less than 50 individuals on the field of play. But the entire stadium has come to see one man. Eighty thousand people have travelled from Riyadh, Buenos Aires, Tokyo, Sydney, Kampala, London, Accra and Los Angeles to see only Lionel Messi.

Shortly after the match kicks off at 1pm, Messi scores a penalty. The roar and excitement of the Argentine fans nearly brings the roof down. But the Saudis fight back and win the tie 2-1 in the second half to produce one of the all-time World Cup upsets.

Most Saudis are in disbelief for they can’t believe that they have beaten a Messi-led Argentina. Fast forward today and nothing has changed, except that Argentina are winning matches. And central to all their performances has been Messi. Put simply, Argentina can’t win a football match now without Messi being Messi.

He has been at the forefront of his team’s creativity and goals and if Lionel Scaloni’s team is to reach the final, it will be down to one man. That man is called Lionel. But his second name is Messi, not Scaloni. I have been privileged to watch Messi play in more than 20 matches.

I was at Wembley in 2011 when he destroyed Manchester United while featuring for FC Barcelona in the Champions League final at Wembley. I have watched him in nearly every Argentina match at the last four Fifa World Cups. There is no footballer in the modern game who has had to contend with the sort of pressure Messi must live with.

Equally, he is the centre of focus. Fans want to watch every match he plays. Argentina matches are always sold-out. In the media
tribune, it is not easy to get media passes to Argentina games. Their post-match press conferences are always full because the likelihood is that Messi will be man of the match.

The mixed zone passes also run out early because journalists want to interview Messi. When Messi gets the ball in the stadium, Argentine fans instantly go on the edge of their seats. They expect something. They think he can conjure up something special anytime from anywhere on the pitch.

Either he will twist and turn, and embark on one of his mazy dribbles that leave defenders with cringed blood. Teams have all set out to mark him. Age has slowed him down now - France striker Kylian Mbappe is arguably the best footballer in the world today - but his instinct to pick out teammates or rise to the occasion hasn’t diminished.

Argentina has the most raucous fans here, but it helps that they have a megastar to cheer every match they go into. Saudi Arabia, Mexico, Poland and Australia have all tried to stop The Flea but with minimal success.

The Netherlands, who are Argentina’s quarter-final opponents, it ought to be said, are a different kettle of fish. And Argentina at times laboured to break down an Australian team whose individual quality is nowhere close to what Louis Van Gaal’s Orange brigade has.

But what Argentina has is what every team at this World Cup would want – Lionel Messi. Comparisons with Diego Maradona will forever trail him. Maradona won the World Cup while the best Messi could do at this stage was lose to Germany in the 2014 final. This is his last chance without a shade of doubt. At 35, he can’t go on forever. There are tougher tests ahead for him and his country.

Argentina fans know that their hopes rest on the small shoulders of their number 10. But also significantly, the hopes of Argentina’s opponents rest on their ability to shut down Messi.

That is the sort of career Messi has had. When his team wins, it is because of him. When his team loses, it is also because of Messi. No player in recent times has had to live with similar pressure, not even his decade-long rival Cristiano Ronaldo. The 2022 World Cup, so far, has been a Messi affair. He is carrying an average bunch of teammates on his shoulders.