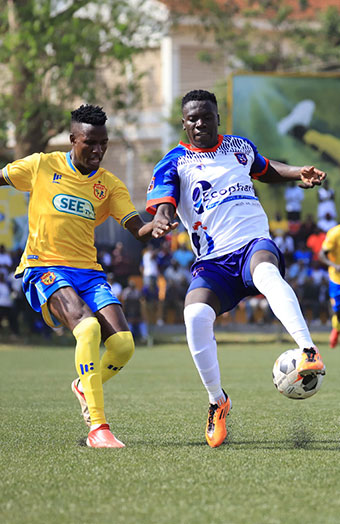 By press-time, the SC Villa management were still pleading their case with Fufa, following their recent sanctioning by the football governing body. After the crowd trouble in Villa’s clash with Wakiso Giants at Wankulukuku stadium, the Jogoos were deducted two points and two goals.

And on top of that, Villa were banned from playing in Wankulukuku for their next five home games, leaving them with the limited options of playing in either Arua or Lira. However, this sanction has many far-reaching consequences on the league than was earlier envisaged.

The Fufa judicial body’s sanctions were intended to inflict pain on Villa, so that they are forced to rein in their errant fans, who threw stones at match officials and support staff of Wakiso Giants; it has worked. The breakout of crowd violence was deemed to be a result of Villa’s negligence on safety and security.

Jackson Magera, the Villa coach, said: “It is a huge blow on us, having to play away from Wankulukuku. Also, to have our points and goals deducted in such a difficult league, is a kick in the teeth on our efforts.”

However, Daniel Bakaki, the senior Villa vice-president, said they have been averaging at least Shs 15 million per game in gate collection at home. So, five games away, that is Shs 75 million lost.

Villa’s next five home games will be without fans. Normally, Villa would spend at least Shs 2 million on a home game. Yet, if they are to play their games in Northern Uganda, just one trip would cost them at least Shs 10 million.

But considering that they have to train on their newly adopted ground, before match-day, the expenses would go up, because of the extra day of accommodation. The sum would go up from Shs 12 to 14 million. That is a total of Shs 60 million to 70 million Villa has to spend.

In light of that, Bakaki said they had filed an appeal on the penalty, and hoped that Fufa could show them some clemency. This is because as a club, they are determined to work with Fufa in reprimanding the stone throwers within 30 days, to avoid further two points and goals being deducted. Bakaki added that as a club, they reject all forms of hooliganism.

Notably, Villa’s punishment will by extension impact on other teams by default. On Friday, November 25, KCCA FC visit Villa in the UPL. While such a match-day, it is said, would cost them at least Shs 1.5 million, covering transport, allowances and meals, a journey up north, will see KCCA’s expenses skyrocket to at least Shs 8 million.

This is largely because they would have to travel early on Thursday, November 24, hire a training ground that evening for their last practice. That would cost them at least Shs 200,000.

Thereafter, they would have to pay for hotel services of about 40 people, including players, coaches and support staff. Put simply, that would come to at least Shs 4 million. Add the meals during the day and allowances, another million and a half shillings would be spent.

Then on match-day, players’ breakfast and lunch, plus allowances would be another extra cost to KCCA, as would inevitably be the case for every team that visits Villa over their next five home games, and the broadcaster, who has to move equipment very far.