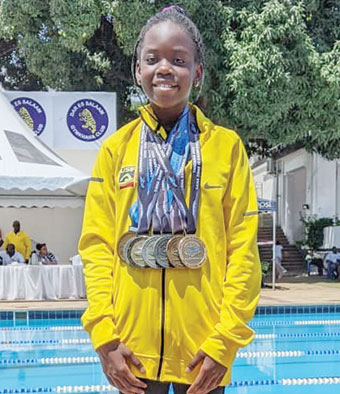 STAR ON THE RISE: Swimmer Zara Marie Mbanga displays her medals at CANA event in Tanzania

A large section of Uganda’s swimming fraternity was left speechless, while the coaches scrambled for the record books, after 11-year-old Zara Mbanga smashed the clock in a jaw-dropping time of 2:55:69 minutes during her 200-metre breaststroke race at the just-concluded CANA Zone III championship in Tanzania.

That swim, done on a warm evening at the Gymkhana Country pool in Dar es Salaam, propelled Mbanga to the youngest-ever record holder of an open swimming event in Uganda.

In Uganda, coaches were left combing the African records to see where Mbanga’s time fares on the continent in her particular age group. The only available information is by CANA, which, on its website, canaswim.com, says the African record for the 200-metre breaststroke event for the women age group of 11-12 years is at 2:59.2 minutes.

However, many records in South Africa short-course events show times faster than Mbanga’s. Only Kirabo Namutebi has in the recent times enjoyed the pleasure of holding an African junior record, in her 50-metre freestyle in the 13-14 age group category.

Nonetheless, there were praises for Mbanga, who turns for Jaguar swim club, after she won the second runner-up trophy at the championship.

“…you have made us so proud. Keep going, never stop and you are what gems are made of,” wrote one fan of Mbanga.

Another wrote: “Olympics here we come.”

Attention will be if the young swimmer has the right system around her, and temperament to handle the pressure that comes with early successes. Uganda has had so much talent in the past, where young swimmers came through the early ranks, only to drop off along the way.

There remains strong competitors out there who have the ability to match Mbanga pound for pound. Young talented swimmers such as Paula Nabukeera, Abigail Mwagale, Peyton Suubi, Hatmah Nabakka and Kirabo Paloma present formidable competition to Mbanga.