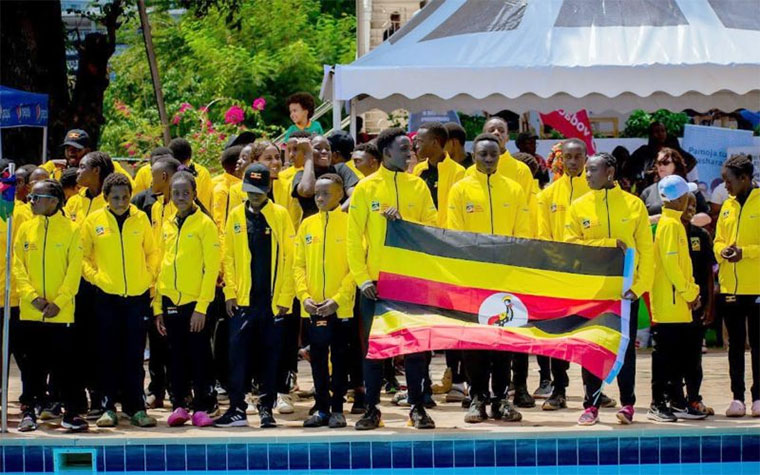 Some of the Ugandan swimmers who emerged third best overall

Tara Kisawuzi officially stamped her authority in the region after she made a clean sweep of all her seven individual races – the first-ever Ugandan to pull off such a feat – at the seventh edition of the CANA Zone III Swimming championship held in Dar es Salaam, Tanzania, last weekend.

Winning gold all throughout, and thereafter the overall winner of the Women age group category 13 – 14 years, Kisawuzi was one of the highlights of the tournament, where Uganda finished third out of 11 countries.

It was a strong showing by Uganda, which not only sent its highest number of swimmers at such a major competition – about 47 – but also one where the country collected its highest medal tally ever at 85 – 28 gold medals, 25 silver medals and 32 bronze medals.

National records collapsed like a pack of cards as swimmers recorded personal bests. Kisawuzi lowered both her 50 metre and 100 metre butterfly times to set new national records. She is already less than a second away from breaking the junior African record in the 50-metre butterfly in a long course pool.

Kisawuzi’s performance adds to the firepower that Uganda enjoys in Kirabo Namutebi, who did not participate at the Tanzanian edition. But if it is about records falling, then the headline went to 11-year-old Zara Mbanga, who smashed the national record in the 200-metre breaststroke by nearly three seconds.

Held by Uganda’s most decorated swimmer of all time, Kirabo Namutebi, at 2:58:04 minutes, the 200-metre breaststroke record fell when Mbanga stopped the clock in 2:55:69 minutes. Uganda also scooped a couple of relay medals across all the age categories, evidence of how the sport has grown.