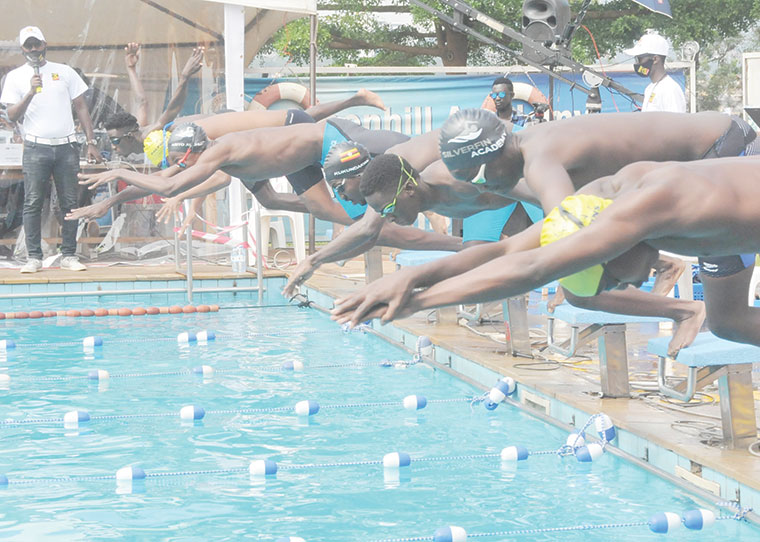 Swimmers dive into the pool during a recent national event at Greenhill Academy in Kampala.

If the results from the Uganda national swimming sprints are anything to go, then Uganda’s chances of retaining the winners’ trophy at the seventh CANA Zone three championships, which started Thursday in Dar es Salaam, Tanzania, look good.

At the national age group sprints, which took place at Muhika Junior School in Kiira over the weekend, Uganda’s main prospect, Kirabo Namutebi, looked in fine shape, and there should be no reason as to why the 17-year-old should not collect a couple of medals.

Tara Kisawuzi, yet again, showed us why she is one of Africa’s most promising swimmers, when she lowered her times in the 50-metre butterfly to 29.73 from 29.80. Now under the tutelage of renowned Coach Muzafu Muwanguzi at Gators swim club, the 14-year-old swimmer, who is less than a second away from breaking the Africa Junior long course record in the 50-metre butterfly, is expected to perform well in Dar es Salaam.

Zara Mbanga of Jaguar swim club will lead the medal hunt for Uganda in the 12-years-and-under age group after she stamped her authority in her favoured breaststroke and backstroke. The 11-year-old recorded new personal bests in the 50-metre races, showing why she is one of the swimmers to look out for in the future.

With Tendo Mukalazi and Adnan Kabuye missing from the team – both are studying out of the country – Steve Magera will be the one to look out for. Magera, 17, looked sharp in his signature 50-metre butterfly.

A couple of Ugandan swimmers studying abroad, such as Paulsen Settumba and Ba Raya Inell, will join the team in Dar es Salaam. The team, which will be captained by Karla Mugisha and Ben Kaganda, is taking more than 40 swimmers to Dar es Salaam, the highest contingent ever.

The numbers point to just how big the sport has grown, despite a two-year lull brought about by Covid-19. The team was selected according to their times at the national championships held in July this year.

Many of the swimmers going to Dar es Salaam will be looking to making better times to stand a good chance of being called up into the team that will participate at the more competitive Zone IV championships, which attract the fierce Southern African teams.

The seventh CANA Zone III Championship, to be held at the Gymkhana country club, is a zonal competition for 13 African countries. The last edition of the competition was held in Uganda in 2021, with the hosts winning the overall competition after it collected the most points. The Ugandan team will be coached by coaches Joseph Kabogoza and Olivier Nalwadda.