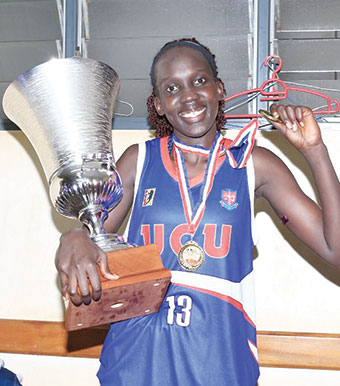 Uganda Christian University’s (UCU) basketball star Rose Akon was crowned as the Forte- Bet Real Stars awards month of October winner last week while she was away in Turkey at the 3 on 3 basketball University World Cup.

Together with her three other teammates: Agatha Kamwada, Hajara Najjuuko and Shakira Nanvubya, UCU were able to make it to the round of 16, an improvement from their previous foray in China, 2021, when they did not make it beyond the group stages.

This was testament to the continued rise of this UCU team, which Akon inspired to National Basketball League (NBL) success recently after they edged the JKL Dolphins 4-3 in seven games. In fact, it was on that backdrop that Akon was voted the Real Stars basketball player of the month, edging out City Oilers’ Francis Azolibe and Namuwongo Blazers’ Dikong Deng.

However, to Akon, although the Real Stars award is a seal of approval for her efforts, it is a whip up the backside, to go even further with her basketball career.

Akon said: “Truthfully, hard-work does not lie. When we were going through the regular season and lost twice to JKL Dolphins, who were unbeaten at the time, few gave us a chance. But we kept working and, eventually, registered the NBL title.”

It is from that NBL title that Akon turned out to be the playoff MVP. And Akon looks back with delight on the amount of work she put into training: “Having to wake up very early at 6am, to do road-work and shooting practice until 9 am, was all worth it. Now I just need to double my efforts, to go bigger.”

Akon, who was born in April 2000 in South Sudan, has lived in Uganda for the last 17 years. It is here that she has developed her basketball skill and, now more than ever, is determined to make this a career. She wants to be a professional basketball player, holding a bachelor’s degree in Accounts from UCU.

Ironically, she recalls that this career path did not start so well while at St Michael Secondary School in Sonde. She used to participate in several sports disciplines from volleyball, netball and even track and field, with a particular bias for sprints.

Yet, she had to be dragged to the court to train. Akon laughs about it today, saying, “I did not like training, because of the physical exertion the body was subjected to. But now I realize that it was for my own good. And for me to even get better, training must be even a lot more. For young athletes aiming for the top, they must know that.”

With Akon’s height, she has got her basketball future looking bright. Playing as a small forward, is perhaps where she will focus her trade. Last year, she was summoned to play for South Sudan, but she did not make it, because of Covid-19.

Representing her country remains a huge prospect. But as she enjoys her seemingly never-ending time in the sun, Akon feels sad, that her time at UCU has come to an end. Leaving home is never easy, she said.