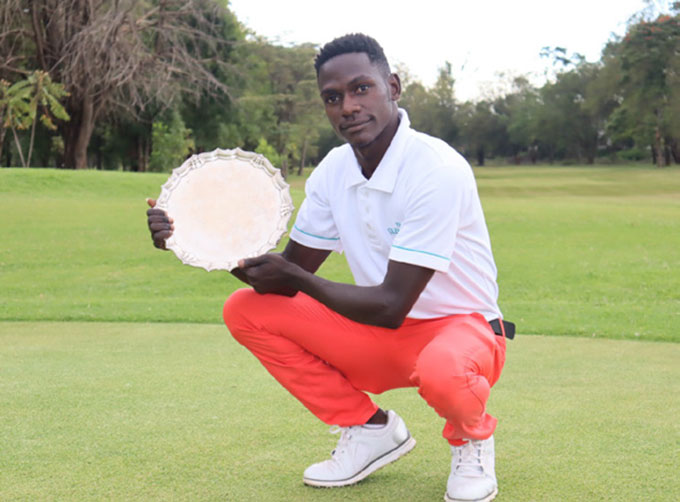 Last weekend, he continued his magnificent season by securing victory in the Manchester Salver Golf tournament in Eldoret. Alunga played one-under in both rounds to hold off a formidable field that included Kenya national team star Adel Balala.

He thus added his name to the list of winners of the Machester Salver shield that was donated to Eldoret Golf Club in 1951 by the Duke of Manchester. Alunga dethroned Simon Karari.

That victory in Eldoret was Alunga’s third this season, following his triumphs in the Malindi Open and the Kericho Tea Leaves Open and the diminutive golfer is impressed with the trajectory of his game.

“I am putting records which will be up there for some good time. And I am still making the records.”

Alunga made the smart decision of opting out of the comfort zone of Ugandan golf to test himself in a more competitive and challenging field offered by Kenyan amateur golf. And it has duly paid dividends.

Alunga’s short game has always been famed as one of the best in the country and he has regularly brought it to the fore in Kenyan competitions.

“He is a nasty little fellow,” remarked Kenyan golfer Carl Wambasi, in full admiration of his talent.

Newly crowned Uganda Golf Open champion Andrew Ssekibega was, however, disqualified. He reportedly didn’t sign on his card after the opening round. Elsewhere Ronald Rugumayo was one of the several Ugandan golfers who travelled to Kenya to play at Limuru Golf Club in the second event of this season’s lucrative Safari Golf Tour.