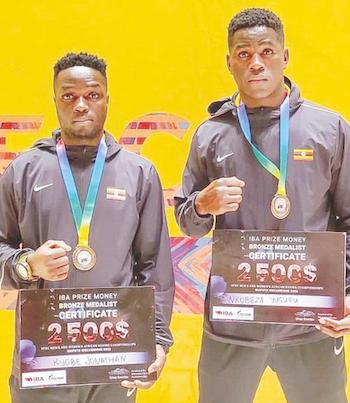 Uganda’s bronze medalists Yusufu Nkozeba and Jonathan Kyobe from the recent Africa boxing championship have something common; they were both inspired by violent situations to embrace boxing as a career.

Growing up in Nakawa and Bwaise slums, Nkobeza and Kyobe, respectively, encountered gang violence either as perpetrators or victims. In such environs, Nkobeza and Kyobe had to steel themselves for survival, and that aspect came to the fore last week as the duo fought for medals in the boxing in Maputo, Mozambique.

However, Nkobeza and Kyobe were disappointed not to have made the final. Following their quarterfinal exit at the Commonwealth Games in Birmingham, UK, their sights were on gold at the Africa event in the capital Maputo.

Yet, in the aftermath, their semifinal finish, which guaranteed them bronze medals, was not bad after all. They are the only Ugandan boxers from the seven that travelled down South, that won medals.

This has given them new perspective, particularly because each of them was given a cash prize of $2,500 (Shs 9.2m) by the tournament organizers.

Nkobeza, 24, who hails from Nakawa boxing club, said: “When I look back on how lazy I have been previously, not training as hard as I should have, the gains from Maputo have now boosted me to work harder. I can never give my coaches trouble again; compelling me to train more, when I personally did not push enough. Boxing can surely be a goldmine.”

Right about this time last year, Nkobeza, who is a middleweight (75kg) was a sparring partner for Olympic bound David Ssemujju.

He did not think he would be on the national team. But circumstances where Ssemujju turned professional after failing to agree terms with the Uganda Boxing Federation over their Boxing Champions League tournament, opened the door for Nkobeza.

Such was the case for Kyobe, another 24-year-old pugilist, from Lukanga boxing club, that hails from Lugoba, Kawempe. Nurtured in Bwaise by the sturdy hands of the late Zebra Ssenyange, Kyobe, who clearly did not go far enough with his studies, is making his fists work for him.

While he still sulks about the way he was defeated in the semifinal by a Mozambican fighter, Kyobe insists that he was robbed, because his opponent was fighting at home.

But he said: “That is history now. We will meet again, possibly, and I will prove to everyone that I defeated that fellow. Right now, my focus is on upping my training for the World Boxing Championships later this year.”

Incidentally, being involved in competitive boxing has enabled Nkobeza and Kyobe to focus their lives. When asked about how they intend to use their recent jackpot, they both said they would buy land from that money, yet the interviews were conducted separately and in different locations.

In light of that, Twaibu Mayanja, the Bombers team manager, said that the duo’s performance has given UBF strong belief that they can achieve a lot more, provided they attain more international exposure.

“Nkobeza and Kyobe have the talent to box, but had they boxed a lot more before, gold at the Africa event would have been guaranteed as far as they are concerned,” Mayanja said.

At the Mountain Kilimanjaro boxing tournament in Tanzania, before the Commonwealth Games, where Uganda joined other nations: Tanzania, Zambia and Burundi, Nkobeza and Kyobe both bagged gold together with their teammate Joshua Tukamuhebwa.

At the Commonwealth Games, Nkobeza and Kyobe were beaten in the preliminaries. Nkobeza admitted that in Birmingham, he learnt that boxing was not about power, but smart play, where every jab one landed scored. On the other hand, even as the two celebrate their recent triumph, Nkobeza could not afford not to reflect on his past while growing up.

He said: “I was involved in some gangs, that just went about fighting and assaulting others. Sometimes, when I fail to win, I think that the tears of those I hurt are still being shed. Those things haunt me even though I have since turned around my life.”

Such was the slum life that both Nkobeza and Kyobe underwent, where it was survival for the fittest. Yet, now, all they are focused on, is becoming Uganda’s next pound-for-pound pugilists. The World Boxing Championships and the 2024 Olympics in France are within touching distance.