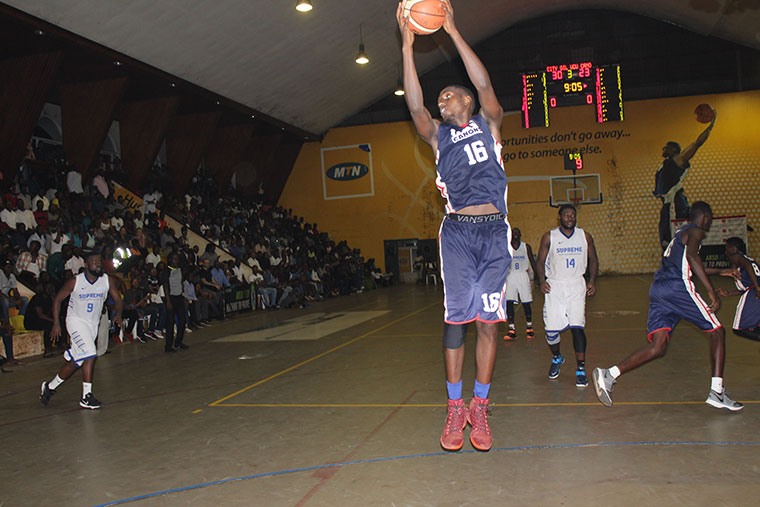 UCU Canons and City Oilers return to the YMCA court in Wandegeya this evening for their semi-final playoff game two in the Tusker Lite National Basketball League.

The Canons, who are 0-1 down, after losing game one 64-72 on Sunday, September 11 at the YMCA are in need of a response, if they are to triumph in this best of five series.

However, if they are to peg the seven-time defending champions, Oilers, back, UCU will need their power forward Fadhili Chuma, to show up this time. Normally, when Chuma has done well, UCU have either been unplayable, and it has usually led to victory for them.

Yet, in game one, when his team needed him so much, he hardly stood up to be counted. Chuma was lukewarm and clearly struggled to make his presence felt. While Chuma will most automatically be the first name on coach Nick Natuhereza’s starting five, as he was on Sunday, which translates to importance, he only scored three points in 18 minutes.

But the fact that Chuma only played those minutes in a 40 minutes game, speaks volumes about how much UCU missed his influence. He would normally average at least 32 minutes since he is a key cog in UCU’s team. Chuma is a player that has surely come of age, having been at UCU since 2016.

And this is largely because of his physicality and presence on both sides of the court. Chuma is so instrumental on the defensive side, because of his ability to box out opponents, to limit their chances of scoring. Yet, in game one, he only recorded two defensive rebounds.

On the offence, where Chuma would normally lead the way for his team either by picking up offensive rebounds and also scoring from them, he had none in that regard. Reports from the UCU camp say that Chuma has been recovering from injury, which is why he is struggling.

But there is hope that tonight, he will be fully healed and ready to rumble. UCU have never knocked out the Oilers in the playoffs: In the 2015 semifinals, they lost 2-3, after leading 2-0 and in the 2019 finals, they lost 3-4. That infamous statistic is one they will need to shade off.

Incidentally, Chuma’s partner at the post, Titus Lual had a good game one with a game-high 19 points, the two teams combined. He registered three offensive rebounds and 12 defensive ones. He was arguably the best player on court between the two sides. Yet, it is believed, the absence of his side-kick Chuma handicapped UCU.

Assistant coach Emmanuel Kiguyi explained that they started slowly as a team, and played with so much caution. There will be adjustments for game two, to ensure that a team, which floundered in game one improves.

UCU’s Sudi Ulanga said that they cannot go 2-0 down. At this level, Ulanga pointed out, “we have to be efficient and strong-willed to slag it out, which we did not in game one.”

In addition, Ulanga accepts that as a senior, it starts with him. In the 20 minutes Ulanga played, he only scored two points, someone who was fondly known for his three point shooting range in the past. In a nutshell, the name Chuma is loosely translated as metal in vernacular. UCU will need mettle against Oilers to keep series alive.