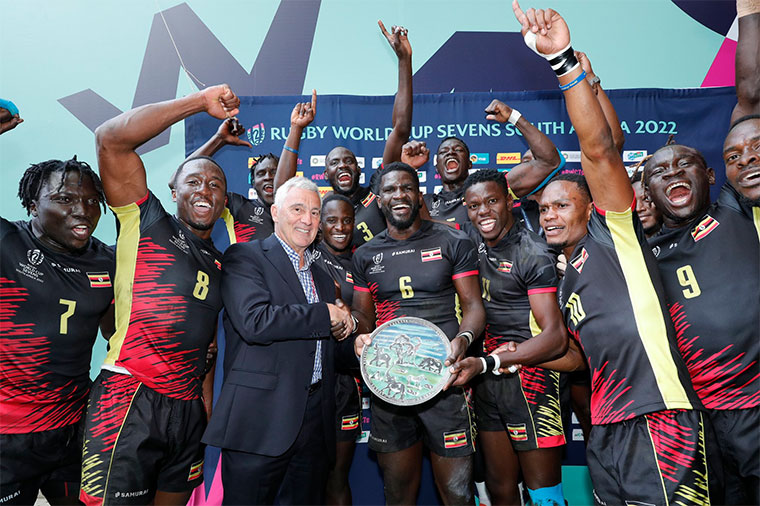 The goal in Cape Town was to finish in a position better than the Rugby 7s managed at the last World Cup in San Francisco, USA. And by winning the Bowl final on Sunday, the team proved that they are going places in world rugby, writes MARK NAMANYA.

The months of July, August and September have been the most intense the Rugby Cranes 7s team have had to endure in memory. First was the Commonwealth Games in Coventry, UK in July that preceded the Challenger Series in Santiago, Chile last month. And when the team flew back to Kampala, focus had to instantly switch to the Rugby World Cup Sevens.

Success does not come cheap and as Uganda overcame Germany 19-12 to win the Bowl final, the victory was just reward for the magnificent effort the team had put in, leading up to Sunday’s showdown. Also worth noting is that the Adrian Kasito and Michael Wokorach-inspired win catapulted Uganda to 17th on the final standings, an improvement of two places from the San Francisco expedition from four years ago.

The celebratory scenes from the pitch all the way to the dressing room showed just how much the victory had taken a heavy weight off their shoulders. Roared by a small but vociferous crowd of Ugandans who made it to Cape Town, the Rugby World Cup Sevens elevated Uganda to new heights.

Four years ago in San Francisco, Uganda finished the tournament in 19th position. Four years later, the Rugby Cranes chopped off two places to end as the 17th best side in the world. There is every reason to suggest that Uganda can finish better at the next edition.

“We have got very good players who will continue helping us develop the 7s version of the sport,” coach Tolbert Onyango noted in the aftermath of the Bowl victory. “The kids who have picked up the sport need to see some sort of pathway on how you can play and develop not just nationally but internationally.

“In the next four years, seeing how government has come in to support the sport, we should see some remarkable improvement along the way.”

For veteran and skipper Wokorach, the Cape Town edition will feature very high among his career highlights.

“It is absolutely my proudest moment; up there with winning the Africa Cup. Beating Germany for the first time ever and beating Hong Kong are very special moments for me as captain and for the team.”

Uganda started off the Rugby World Cup 7s with a loss to the Samoans, which in every likelihood wasn’t unexpected. In fact you can only blame the luck of the draw considering that neighbours Kenya were picked to play Tonga, a relatively easier fixture, in the opener.

Still, it was a much-improved performance compared with the hiding Uganda’s team received to the same opponents in the opening game of the competition four years ago. Once Uganda was eliminated from the main event, the team rallied around one another to do well in the Bowl competition. The dominant victories over South Korea, Hong Kong and bogey-side Germany told of a new-found belief in the Rugby Cranes.

“We have really worked hard in the last four years,” captain Wokoroach stated. “We have also had plenty of tournaments we have played to build up on the experience.”

He added that finishing 17th shows that the team is headed in the right direction and naturally will harbour bigger aspirations if they qualify for the 2026 edition. Wokorach, 32, has been a mainstay in Uganda’s 7s teams at the last major competitions but whether or not he is still in the frame for selection, there is no doubt that the country has developed young, budding talent for the future.

Youngsters like Desire Ayera and Norbert Okeny enhanced their glowing reputations with performances beyond their years and their experience at the highest level will stand the team in good stead.

That Uganda won the Bowl without Philip Wokorach hitting his usually high standards is proof of the development of other pieces in the unit. He was mediocre at best, his timely try against Germany notwithstanding.