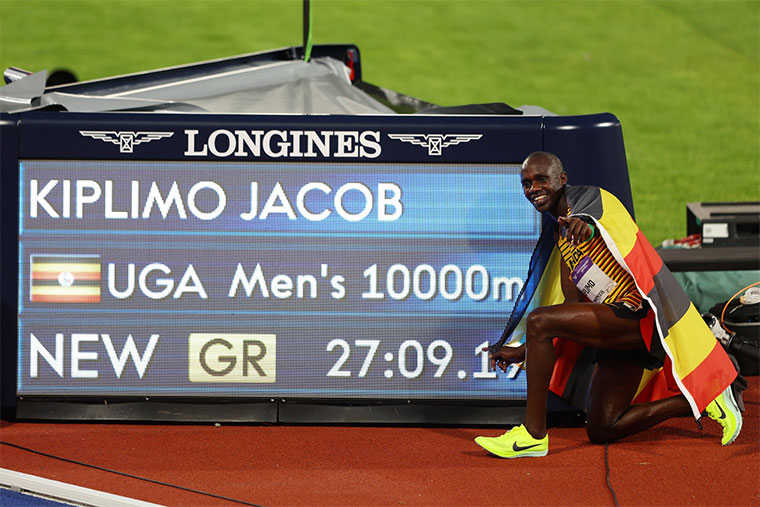 In the absence of Jacob Cheptegei, Kiplimo entered a solo race at the Alexander stadium and beat a 9-man field to command a respectable gold medal - emulating his brother Victor Kiplangat who opened Uganda’s medal tally at the 2022 games when he won gold in the 42-kilometre race.

Kiplimo beat off competition from Kenya’s Daniel Simiu who came second in 27:11.26 followed by another Kenyan Kibiwott Kandi in 27:20.34. Kiplimo started well the race holding onto the first three positions as England’s Sam Atkin led the pack in the first lap. He held on up to the first 2800m before Scotland’s Andrew Butchart overtook him while Kiplimo dropped three positions behind. As the race unfolded Kenya’s trio of Daniel Simiyu, Kiwotti Kandie, and Edward Pingua started leading the pack as Kiplimo looked on from the back.

However, in the last 2000m, Kiplimo outsprinted all of them to lead the pack. Towards the last four laps, the leading pack bridged a huge distance from the last pack before the race competition remained between Ebenyo and Kiplimo in the last 500 meters as Kenya’s Kendi also faded slowly.

The race became even hotter in the last 200 meters when Ebenyo outsprinted Kiplimo but didn’t last long before Kiplimo took over the leading position towards the last 70 meters thus finishing the race comfortably.

Kiplimo who has the eighth fastest time in the world over the 25-lap distance, which stands at 26:33.93, entered the race as the favorite amongst the other competitors. The 21-year-old Olympic bronze medalist had the task of defending Uganda’s huge history in the previous edition of the games where Uganda won a gold medal over the 10,000m distance.

Uganda has now won the last five 10000m titles starting way back in 2006 when Boniface Kiprop triumphed in Melbourne followed by Moses Kipsiro in Delhi (2010) and in Glasgow (2014) before Joshua Cheptegei won it in Gold Coast in 2018. Kiplimo will return to the track on August 6 to compete in the 5000m distance.

He was supposed to partner with his compatriot Joshua Cheptegei who pulled out of the games due to injury. Before Kiplimo's race, middle distance runner Halima Nakaayi progressed to the finals of the 800m after finishing second. She crossed the finishing line in 1:59.35 behind Kenya’s Mary Moraa who won the heat in 1:59.22. The final will take place on Saturday.

In the same development, sprinter Jacent Nyamahunge also progressed to the semifinals of the 100m when she finished third in heat six. She clocked 11.53 behind Jamaica’s Ntalliah Whyte who won the heat with 11.31 seconds.

The national netball team, She Cranes suffered their second loss in the group stages. Coach Fred Mugerwa’s side fell to third-ranked England 57-35. The loss threatens She Crane's chances of progressing to the semifinal. The loss means that Uganda remains with only two points in the last three games played so far.

This was the third time the two sides were meeting in four years with the first at the 2018 Gold Coast Commonwealth Games in Australia which ended 55-49 in the Roses' favour and the 2019 World Cup where England also defeated Uganda  64-32. The biggest highlight was a clash between Peace Proscovia and Lacy Guscoth 8 minutes into the first quarter.

Peace left the court shortly after this incident, which resulted in her replacement by Mary Nuba. But their opponents dominated that quarter ending 13-7, with six goals ahead. Uganda closed the gap in the second half, which ended 18-4 but fell far behind in the third 15-9. The She Cranes tried to stay in the game by closing the gap in the final quarter which unfortunately ended 16-11.