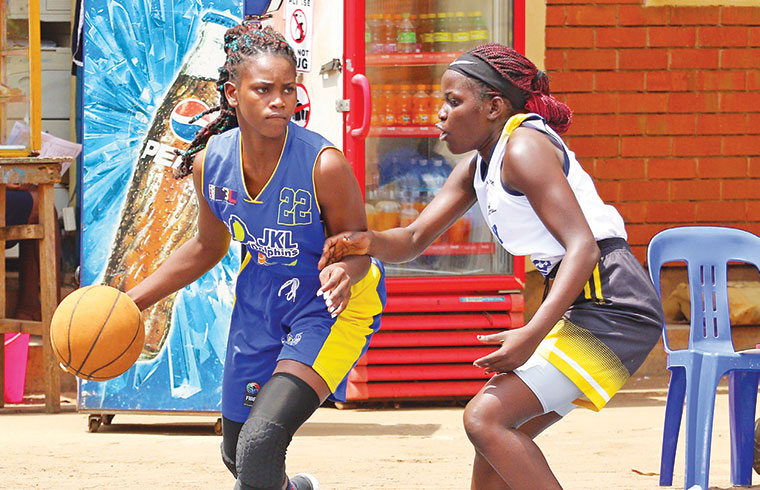 The JKL Lady Dolphins have a date with the Magic Stormers on Sunday July 31 in the Tusker Lite National Basketball League (NBL).

It will be JKL’s final regular season game; one they are expected to win by a canter, to complete the regular season with a clean record of 18 wins in 18 games. This will not be an unprecedented feat by JKL, who are two-time defending champions, having won the league in both 2018 and 2019.

Women’s side KCCA Leopards went unbeaten in the 2017 regular season. However, JKL seem primed to extend their winning run way into the post-season too. Considering how dominant they have been in the regular season, it will take something herculean, to stop them.

“Our desire to win every game is so great,” JKL point-guard Flavia Oketcho said. It is such that Oketcho premised their winning streak and consistency to. She added that their hunger for more championships supersedes any hiccup they may have.

“When you taste a championship, you just do not want to settle for anything less,” Okecho emphasized.

Essentially, Oketcho has been winning all through her basketball career. From her days at the Lady Bucks between 2003 and 2007, to the UCU Lady Canons and KCCA Leopards, Oketcho is the most decorated female basketball player in the history of Ugandan basketball.

Yet, she still wants more, something that has rubbed off JKL too. But their seeming invincibility, Oketcho noted, is hinged on pushing the barriers no matter how hard they seem. The overall belief in each other’s ability to deliver in their respective roles has not only made JKL a team, but a complete monstrous unit, leaving every opponent for dead.

The UCU Canons, whom JKL deposed, after they won the 2015, 2016 and 2017 championships, KIU Rangers and KCCA Leopards had been penciled in to give the Dolphins a real run for their money this season.

Yet, it is a far cry since JKL actually lost a physical game. That was on the opening day of the 2021 season in April, when a Claire Lamunu-inspired KCCA rallied from a halftime deficit, to clinch victory at the death. It was a game played in Kansanga at the KIU court. Yet, even that result was rescinded, after it was discovered that KCCA had not fully registered some of its players with Fuba, the national body (that granted them permits to play), before the league started.

What is abound now, is whether JKL can be stopped. Hope Akello, JKL’s power-forward, said: “Basketball is a funny sport, and until the final whistle, you cannot tell. I feel we just have to remain composed and structured all the time; take each game at a time. The good thing is that we have good fighting spirit, a good mcoach and a management team that is supportive. With that, we should be able to keep winning.”

Mavita Ali, KCCA’s coach, feels JKL has a good team, which has exploited their defensive mistakes. Yet, she added that once they get on top of the errors, they should be able to contend with them. It is probably the UCU that came closest to beating JKL recently, when they forced them into overtime. But in the end, JKL blew them away.

It is without question, that JKL has the best team. Besides adding Kenya’s imposing international Taudencia Oluoch, JKL have the women’s national team (Gazzelles) in their ranks: Oketcho, Akello, Ritah Imanishimwe, Evelyn Nakiyingi, Stella Oyella and Brenda Ekon.