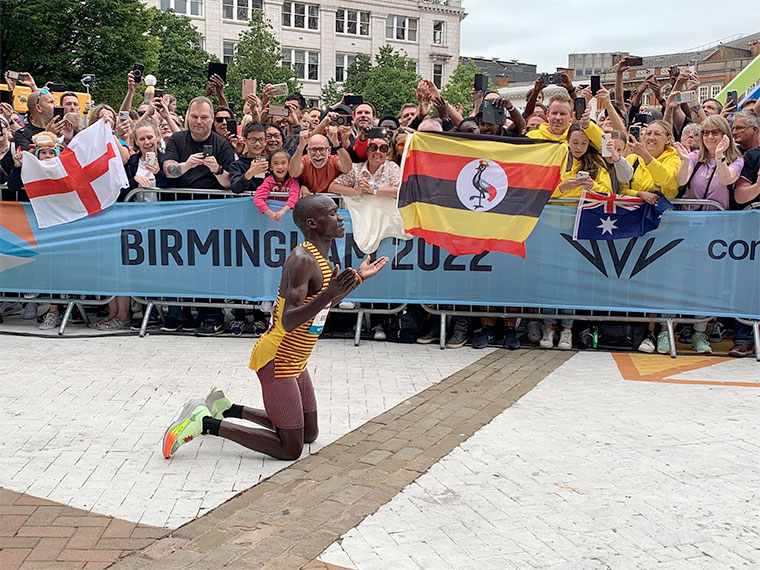 London, The final two kilometres of the 2022 Commonwealth Games marathon race had thousands of fans lined up on either side of Colmore Row Road as they waited patiently in anticipation for the first athlete to make his way to the finish line in Victoria Square.

Thanks to modern technology many of the fans could already tell who was in the lead thanks to the giant screen at the finish line.

With Victor Kiplagat in a comfortable lead just a kilometre to the finishing line, Ugandans in their hundreds who had made their way to the Square, proudly displayed their flags and waited for the moment to turn into reality.

Even the section of Ugandan journalists who were in the mixed zone, an area where journalists hold short interviews with athletes after the race, were walking with their heads high. Ismail Dhakaba Kigongo screamed himself hoarse, Clive Kyazze was an impressed mess of excitement while Darren Allan Kyeyune was an envelope of excitement, delirium and pleasant confusion.

That in itself is the power of sport. Sport, in the words of former Fifa strongman Sepp Blatter, is the best celebration of humanity. He was right. As we walked through Birmingham streets, we felt on top of the world. Even if it were just the Commonwealth Games, which are distant cousins of the World Athletics Championships and the Summer Olympics, no one could deny us our moment in the sun.

22-year-old Kiplagat had just run the race of his life to elevate us on the world map. The kid from Kapchorwa was the toast of Birmingham and it took nearly an hour for him to get to us in the mixed zone to conduct interviews with his fellow Ugandan journalists.

Until then he had been doing the mandatory interviews with rights holders and being the race winner, he spent longest on the cameras responding to questions from journalists.

Yet as he was ushered to the direction of Ugandan journalists, there were still fans from all over the world who wanted a photo moment with the hero or autographs. Kiplagat, in his typical soft-spoken, unassuming nature, duly obliged.

It was very apparent that he was knackered. At that very moment, no one could factor in that Kiplagat had just done 42kms. The marathon is the most soul-breaking competition, which requires stamina, lungs of an elephant and mental fitness.

Despite being physically and mentally exhausted, Kiplagat soaked in the adulation and took as many photos as he could. He also signed as many autographs as he could. He had just become Uganda’s first ever Commonwealth gold medallist but it hadn’t yet sunk in.

“I still can't believe it,” he told The Observer shortly after the race. “Even as I crossed the line I wasn’t sure that I was the one in the lead. Something in my mind told me that maybe there is one or two people ahead of me; I am very happy.”

He had to overcome pain in his right leg at the 39km mark. Yet as he pushed himself through the race, he remembered what this meant for his people at home.

“Yesterday I spoke on phone with the pastor of my church in Kapchorwa and right there I knew that I had the backing of my people home, and I know that they must be celebrating.”

Sport knows no boundaries. Sport doesn’t discriminate. Sport is all-encompassing. Few things have the power of sport and the Commonwealth Games have done a fine job of remembering Uganda and Ugandans why the sub-sector must be a priority.

The increase in the sports budget, from Shs 27b to Shs 47b, is a starting point but there must be infrastructural changes to match the prioritization of the sub-sector.

A day before Kiplagat’s medal, Uganda’s biggest roar at the Games had been at Coventry Stadium where the Rugby Cranes brought the roof down in a thrilling 12-12 stalemate with powerhouse Australia.

Seven-aside rugby is a sport typically dominated by Oceania sides New Zealand, Australia, Tonga, Samoa, and Fiji. Uganda stood a very small chance of an upset, or so we thought. But to the joy of the tens of thousands inside the stadium, the underdog gave them a match to remember.

In fact, the Rugby Cranes were a Philip Wokorach kick away from victory at the death. The Rugby Cranes didn’t win the match but Uganda won the hearts and souls of all the fans who were at Coventry Stadium and the millions who watched the contest from all over the world.

That is the power of sport – a very small country from East Africa brought mighty Australia to its knees in a discipline where the Aussies are famed globally to be powerhouses. On Friday evening we shared the rugby bragging rights with a country that possesses genuine claims on a podium finish at the Commonwealth Games.

The Games are continuing across several venues in Birmingham and Coventry until August 9, by which time more stories will have been written and rewritten.

But what Team Uganda has already shown is that sports investment is a no-brainer. The rewards of equitably distributing the resource envelope in the sub-sector, as Kiplgata and the Rugby Cranes have demonstrated, are very palpable.