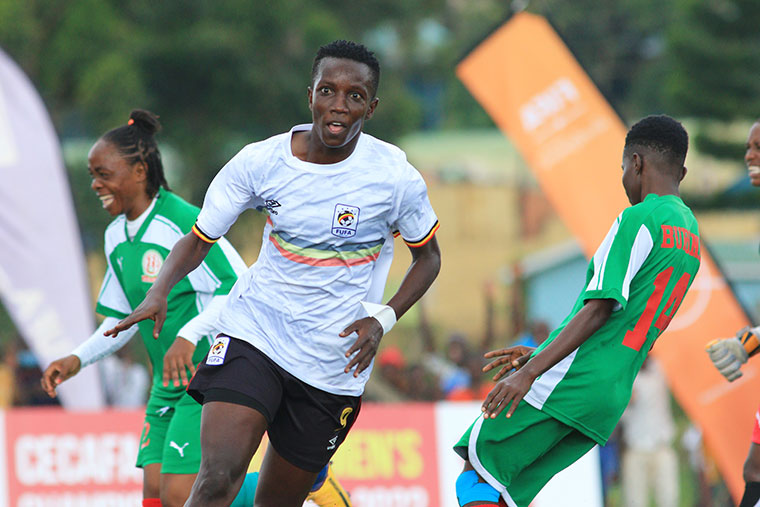 Uganda Crested Cranes’ Fazila Ikwaput celebrates after scoring against Burundi recently. She will lead The Cranes in Morocco

The Crested Cranes will be making their 2022 Women’s Africa Cup of Nations (Wafcon) bow this Sunday, July 3 against West African side, Senegal. This will be followed by a fixture against the hosts Morocco on July 5, before they wind up their group ‘A’ ties against Burkina Faso on July 8.

This year’s Wafcon is the fourteenth edition, but it will be Uganda’s second appearance, with the first one being in 2000, in South Africa. Returning after 22 years should be a bit surreal for the Crested Cranes, more so because the team were called in to replace Kenya, who had qualified, but withdrew from the tournament.

Yet, like they say, fortune favours the prepared, and Uganda’s women will be considered as such. However, questions abound about what to expect from the Crested Cranes in Morocco. George Lutalo, the team’s head coach, told The Observer that they are ready to compete despite not being one of the favourites.

“After winning our first Cecafa title recently, we go into this tournament full of confidence. There is good team spirit among this group, but also a workman-like attitude, that sees them fight for each other. Our goals cut across the team, which is encouraging,” Lutalo said.

Uganda go into the Wafcon with attack being their strongest department. Just how the senior men’s side, The Cranes would pay top dollar for such a strength. Well, for the Crested Cranes, in Fauzia Najjemba, Rita Kivumbi, Sandra Nabweteme, Hasifa Nassuna, Margaret Kunihira and Fazila Ikwaput, who was the MVP in the recent Cecafa with six goals, Lutalo is spoilt for choice.

In fact, some argue that for Lutalo to have so many good players, following the arrival of several foreign-based stars (Rita Kivumbi, Viola Nambi, Najjemba, Ruth Aturo and Tracy Jones Akiror), after the Cecafa, may cause a selection headache by upsetting the already set balance.

“This is drawn back from 2017, when most of these players broke through, to start playing at the top level,” Kiyingi, who has guided Kawempe Muslim Women’s football club to several league titles, noted.

In the 2018 Cecafa, Uganda finished third, before they travelled to South Africa as an invited team to the Cosafa women’s championship. They lost to highly placed South Africa in the semi-finals, but bagged a bronze, following their third-place 1-0 victory over Zambia.

Goalkeeper Ruth Aturo was voted best goalkeeper in the tournament, but overall, Uganda impressed. In 2019, Uganda’s under-17s won the Cosafa under-17 championship in Mauritius ahead of South Africa and Zambia. And Juliet Nalukenge, who is unfortunately not in the Crested Cranes squad this time, top scored with 18 goals while her team-mate Fauzia Najjemba notched 13.

Najjemba will be expected to give Uganda’s attack in Morocco real firepower, considering how much international football she has put in her legs over the last four years. On the other hand, although Kiyingi is upbeat about Uganda’s attack and midfield, he believes improvement is needed in the way the team defends.

The return of Yudaya Nakayenze in central defence should provide better organization and game reading, because of her comfort in possession. Left-back Sumaya Komuntale seems assured while Aisha Nakibuuka at right back will be expected to improve her final delivery.

Notably, Uganda (ranked 156 by Fifa) does not have tall players, which observers feel may prove decisive against taller players like those of Senegal (ranked 89) and Morocco, who are ranked 77, and are appearing at the Wafcon for the third time.

Kiyingi feels that speed of reaction is what should aid Uganda to negate their shortcomings. Otherwise, four points should be enough to get Uganda out of the group.