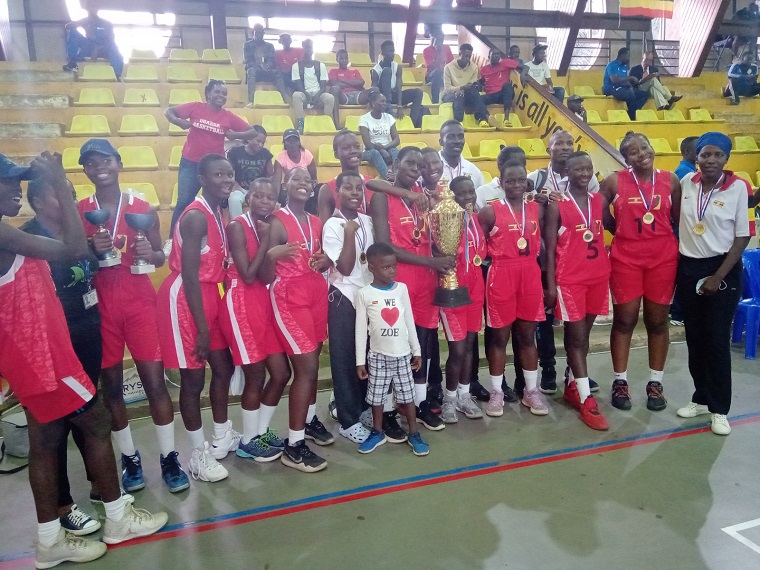 Uganda’s under-18 girls basketball players were beyond elation on the evening of Saturday June 18. This followed their 63-43 win over Tanzania in the final at the MTN arena in Lugogo, which ensured that they secured a ticket to Madagascar, where the Africa Youth basketball Championship will take place in August.

Their celebrations were in stark contrast of what their seniors normally do. For example, late that evening, hours after the final, some of them like Darlene Tashobya, the daughter of former Fuba president Ambrose Tashobya, were seen walking around the court still wearing the full red jersey in which they had played that afternoon.

They just had to show off; probably to remind whoever was in the arena, to take have a keen interest in only those that wore that red jersey of champions. Surely the youthful Tashobya and company were not about to get lost in the crowd. They had to rub it in, a pointer to what exactly goes through the minds of these young winners.

“Truthfully, we could hardly sleep that night, when we returned to camp. The feeling we had was indescribable,” Shillah Lamunu, a guard for team Uganda told The Observer.

Incidentally, this is not the first time Lamunu is representing her country. Back in 2019, she was on the under-16 girls national team, which travelled to Rwanda, and won the East Africa tournament.

Lamunu said: “As a student at Buddo SSS, I have won schools tournaments. But winning with the national team gives one a totally different perspective. First, being on the national team is such a privilege. And to be selected on it among many in the country, is special. When I return to school, everyone looks at me with admiration. They sing praises of me. That is overwhelming.”

This is a wake up call to keep working hard according to Lamunu, who is a good dribbler and shooter. Yet, she feels that it is at this age, that they should be working a lot harder, to realize bigger dreams like playing for the senior national team, and establishing themselves as professionals, say in the WNBA, would be great.

Great is how Magretha Mawana of Tanzania felt, when she was decorated with the award of best rebounder in the tournament. Even as she cried, after her team’s final collapse against Uganda, her first time to represent her country, she said, filled her with pride. Mawana did not expect to win an award when travelling to Uganda.

But the recognition she got made her realize that she has talent, which she needs to work on, to realize full potential. As Mawana got onto the bus for a 34 hour journey back home, her mind focused on what she learnt from other players in both the Rwanda and Uganda camps. That is unlikely to have been the case for Rwanda’s boys, who annihilated their opponents Uganda and Tanzania in four meetings.

Rwanda beat Tanzania in the final 84-49. And their point-guard Boris Nkurunziza told The Observer, as they had their dinner at Javas house that this result was a product of being together as a team and having weekend games for the last one year.

However, because the Africa Championship is definitely going to bring bigger opposition, Nkurunziza noted that the celebrations have to be short-lived, because the journey to becoming a top basketball player is just starting, therefore they must put in a shift.

Sylvia Nantongo, the Most-Valuable-Player in the girls tournament could not hide her joy, after she was announced as the best overall, but also the top-scorer. “Capping off the tournament with a trophy, I felt was so good. But then, being decorated as MVP was a huge surprise considering the level of competition. It was unexpected for sure.”

Nantongo, 16 added that the honours she received were truly humbling. As much as in her head, and in all her expressions, which included kneeling on court, overwhelmed by emotion, she admitted that the hard work begins now. Nantongo noted that few 16 year old winners are remembered unless they kick on, to become stars in their adult life. That is truly the mind of a winner!